The Fairchild Channel F is a game console released by Fairchild Semiconductor in August 1976 at the retail price of $169.95. It has the distinction of being the first programmable ROM cartridge-based video game console. It was launched as the Video Entertainment System, or VES, but when Atari released their VCS the next year, Fairchild renamed its machine.

The Channel F electronics were designed by Jerry Lawson using the Fairchild F8 CPU, the first public outing of this processor. Jerry worked with Nick Talesfore who was responsible for the Industrial Design of the hand controllers, console and video game cartridges as the manager of Industrial Design; and, Ron Smith who was responsible for the mechanical engineering of the video cartridges and the 8 degrees of freedom hand controllers. All worked for Fairchild Semiconductor headed by Wilf Corigan a division of Fairchild Camera & Instrument. Notably, Robert Noyce worked on the F8 design team before he left Fairchild to start his own company, Intel. The F8 is very complex compared to the typical integrated circuits of the day, and had more inputs and outputs than other contemporary chips. Because chip packaging was not available with enough pins, the F8 is instead fabricated as a pair of chips that had to be used together to form a complete CPU.

The palette of the Channel F

The graphics are quite basic by modern standards. The Channel F was only able to use one plane of graphics and one of four background colors per line, only three plot colors to choose from (red, green and blue) that turned into white if the background was set to black. A resolution of 128 × 64 with approximately 102 × 58 pixels visible and help from only 64 bytes of system RAM, half the amount of the Atari 2600.[1][2] The F8 processor at the heart of the console was able to produce enough AI to allow for player versus computer matches, a first in console history. All previous machines required a human opponent.

One unique feature to this console is the 'hold' button, which allows the player to freeze the game, change the time or change the speed of the game during the course of the game.[3] In the original unit, sound is played through an internal speaker, rather than the TV set. However, the System II passes sound to the television through the RF modulator.

The controllers are a joystick without a base; the main body is a large hand grip with a triangular "cap" on top, the top being the portion that actually moved for eight-way directional control. It can be used as both a joystick and paddle (twist), and not only pushed down to operate as a fire button but also pulled up. The model 1 unit contains a small compartment for storing the controllers when moving it. The System II featured detachable controllers. Zircon later offered a special control which featured an action button on the front of the joystick. It was marketed by Zircon as "Channel F Jet-Stick" in a letter sent out to registered owners before Christmas 1982.[4] They also released it as an Atari-compatible controller called "Video Command" it was also first released without the extra fire button, before that only the downwards plunge motion was connected and acted as the fire button, the pull-up and twist actions weren't used.

There are 26 cartridges, termed 'Videocarts', that were officially released during the ownership of Fairchild and Zircon, the first 21 of which were released by Fairchild. Several of these cartridges are capable of playing more than one game and were typically priced at $19.95. The Videocarts are yellow and approximately the size and overall texture of an 8 track cartridge. They usually feature colorful label artwork reminiscent of the artist Peter Max. The earlier artwork was created by nationally known artist Tom Kamifuji and art directed by Nick Talesfore.[citation needed] The console contains two built-in games, Tennis and Hockey, which were both advanced Pong clones. The reflecting bar could be changed to diagonals by twisting the controller, and could move forward and backward.

A sales brochure from 1978 lists 'Keyboard Videocarts' for sale. The three shown were K-1 Casino Poker, K-2 Space Odyssey, and K-3 Pro-Football. These are to use the Keyboard accessory which is a 16 button keypad. All further brochures, released after Zircon took over Fairchild, never listed this accessory nor anything called a Keyboard Videocart.

There is one additional cartridge released numbered Videocart-51 and simply titled 'Demo 1'. This Videocart is shown in a single sales brochure released shortly after Zircon acquired the company. It was never listed for sale after this single brochure which was used for winter of 1979.

Ken Uston reviewed 32 games in his book Ken Uston's Guide to Buying and Beating the Home Video Games in 1982, and rated some of the Channel F's titles highly; of these, Alien Invasion and Video Whizball were considered by Uston to be "the finest adult cartridges currently available for the Fairchild Channel F System."[5] The games on the whole, however, rated last on his survey of over 200 games for the Atari, Intellivision, Astrocade and Odyssey consoles, and contemporary games were rated "Average" with future Channel F games rated "below average".[6] Uston rated almost one half of the Channel F games as "high in interest" and called that "an impressive proportion" and further noted that "Some of the Channel F cartridges are timeless; no matter what technological developments occur, they will continue to be of interest." His overall conclusion was that the games "serve a limited, but useful, purpose" and that the "strength of the Channel F offering is in its excellent educational line for children."[7]

Carts listed (as mentioned above) but never released:

The biggest effect of the Channel F in the market was to spur Atari into releasing and improving their next-generation console which was then in development. Then codenamed "Stella," the machine was also going to use cartridges, and after seeing the Channel F they realized they needed to release it before the market was flooded with cartridge based-machines. With cash flow dwindling as sales of their existing Pong-based systems dried up, they were forced to sell to Warner Communications to gain the capital they needed. When the Atari VCS gaming system (whose name was coined as a takeoff of the VES) was released a year later, it had considerably better graphics and sound. 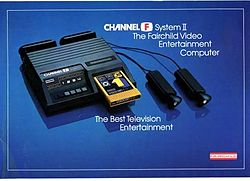 Some time in 1979, Zircon International bought the rights to the Channel F and released the re-designed console as the Channel F System II to compete with the Atari's VCS. This re-designed System II was done by Nick Talesfore at Fairchild. He was the same industrial designer who designed the original game console. Only six new games were released after the debut of the second system before its death, several of which were developed at Fairchild before they sold it off.

The major changes were in design, with the controllers removable from the base unit instead of being wired directly into it, the storage compartment was moved to the rear of the unit, and the sound was now mixed into the TV signal so the unit no longer needed a speaker. This version also featured a simpler and more modern-looking case design. However, by this time the market was in the midst of the first video game crash, and Fairchild eventually threw in the towel and left the market.

A number of licensed versions were released in Europe, including the Luxor Video Entertainment System in Scandinavia (Sweden), Adman Grandstand in the UK, and the Saba Videoplay, Nordmende Teleplay and ITT Tele-Match Processor, from Germany and also Dumont Videoplay and Barco Challenger from the Barco/Dumont company in Italy and Belgium.

Like many other classic consoles, the Channel F lives on through homebrew. For example, a 2009 version of Pac-Man was developed and distributed for the Channel F.[8]