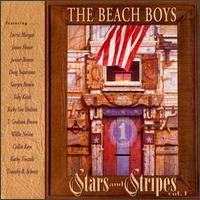 
"Stars and Stripes Vol. 1", despite its title, is ' only foray into the genre of . Their twenty-fifth studio , it was released in 1996. With the genre increasing in popularity in the mid-1990s, The Beach Boys decided to place their music in a country context by having some of its stars guest on new incarnations of some of their classics.

At the time, had recently remarried and in his most stable state in over two decades, he was persuaded to join the project alongside the remaining Beach Boys and co-produce the album. Although no one knew it at the time, it was the last time the band would record an album with either Brian, or , making "Stars and Stripes Vol .1", almost certainly, the last studio album by The Beach Boys.

Most of the acts rounded up were not mainstream country superstars who had crossed over into the pop market, although has since emerged as one. was easily the most recognizable name on the album, and was best known for his time in . had recorded a version of "In My Room" with Brian Wilson, but it was saved for the projected "Stars and Stripes Vol. 2", which never appeared.

Released in August 1996, "Stars and Stripes Vol. 1" easily outsold "", but was not the hit everyone involved hoped it would be. Consequently, with the addition of the chilly critical reaction, potential further volumes in the series were scrapped.

"Stars and Stripes Vol. 1" is currently out of print. The most recent edition was released in in the .