Electrical breakdown in an electric discharge showing the ribbon-like plasma filaments from a Tesla coil.

The term electrical breakdown or electric breakdown has several similar but distinctly different meanings. For example, the term can apply to the failure of an electric circuit. Alternatively, it may refer to a rapid reduction in the resistance of an electrical insulator that can lead to a spark jumping around or through the insulator. This may be a momentary event (as in an electrostatic discharge), or may lead to a continuous arc discharge if protective devices fail to interrupt the current in a high power circuit.

The most common meaning is related to automobiles and is the failure of an electric circuit or associated device resulting in a loss of vehicle function (a breakdown). Common problems include battery discharge, alternator failure, broken wires, blown fuses, etc.

The second meaning of the term is more specifically a reference to the breakdown of the insulation of an electrical wire or other electrical component. Such breakdown usually results in a short circuit or a blown fuse. This occurs at the breakdown voltage. Actual insulation breakdown is more generally found in high-voltage applications, where it sometimes causes the opening of a protective circuit breaker. Electrical breakdown is often associated with the failure of solid or liquid insulating materials used inside high voltage transformers or capacitors in the electricity distribution grid. Electrical breakdown can also occur across the insulators that suspend overhead power lines, within underground power cables, or lines arcing to nearby branches of trees. Under sufficient electrical stress, electrical breakdown can occur within solids, liquids, gases or vacuum. However, the specific breakdown mechanisms are significantly different for each, particularly in different kinds of dielectric medium. All this leads to catastrophic failure of the instruments.

A disruptive device is a device that has a dielectric, whereupon being stressed beyond its dielectric strength, has an electrical breakdown. This results in the sudden transition of part of the dielectric material from an insulating state to a highly conductive state. This transition is characterized by the formation of an electric spark, and possibly an electric arc through the material. If this occurs within a solid dielectric, physical and chemical changes along the path of the discharge will cause permanent degradation and significant reduction in the material's dielectric strength. A spark gap is a type of disruptive discharge device that uses a gas or fluid dielectric between spaced electrodes. It may be used to discharge the primary capacitor of a resonance transformer into the primary inductor. Unlike solid dielectrics, liquid or gaseous dielectrics can usually recover their full dielectric strength once current flow (through the plasma in the gap) has been externally interrupted.

Electrical breakdown occurs within a gas (or mixture of gases, such as air) when the dielectric strength of the gas(es) is exceeded. Regions of high electrical stress can cause nearby gas to partially ionize and begin conducting. This is done deliberately in low pressure discharges such as in fluorescent lights (see also Electrostatic Discharge) or in an electrostatic precipitator.

Partial electrical breakdown of the air causes the "fresh air" smell of ozone during thunderstorms or around high-voltage equipment. Although air is normally an excellent insulator, when stressed by a sufficiently high voltage (an electric field strength of about 3 x 106V/m[1]), air can begin to break down, becoming partially conductive. If the voltage is sufficiently high, complete electrical breakdown of the air will culminate in an electrical spark or arc that bridges the entire gap. While the small sparks generated by static electricity may barely be audible, larger sparks are often accompanied by a loud snap or bang. Lightning is an example of an immense spark that can be many miles long. The color of the spark depends upon the gases that make up the gaseous media. 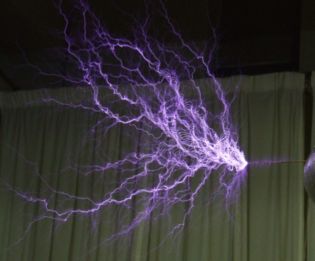 If a fuse or circuit breaker fails to interrupt the current through a spark in a power circuit, current may continue, forming a very hot electric arc. The color of an arc depends primarily upon the conductor materials (as they are vaporized and mix within the hot plasma in the arc). Although sparks and arcs are usually undesirable, they can be useful in everyday applications such as spark plugs for gasoline engines, electrical welding of metals, or for metal melting in an electric arc furnace. 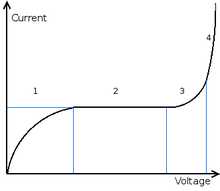 Before breakdown, there is a non-linear relation between voltage and current as shown in the figure. In region 1, there are free ions that can be accelerated by the field and induce a current. These will be saturated after a certain voltage and give a constant current, region 2. Region 3 and 4 are caused by ion avalanche as explained by the Townsend discharge mechanism.

Partial breakdown of the air occurs as a corona discharge on high voltage conductors at points with the highest electrical stress. As the dielectric strength of the material surrounding the conductor determines the maximum strength of the electric field the surrounding material can tolerate before becoming conductive, conductors that consist of sharp points, or balls with small radii, are more prone to causing dielectric breakdown. Corona is sometimes seen as a bluish glow around high voltage wires and heard as a sizzling sound along high voltage power lines. Corona also generates radio frequency noise that can also be heard as "static" or buzzing on radio receivers. Corona can also occur naturally at high points (such as church spires, treetops, or ship masts) during thunderstorms as St. Elmo's Fire. Although corona discharge is usually undesirable, until recently it was essential in the operation of photocopiers (xerography) and laser printers. Many modern copiers and laser printers now charge the photoconductor drum with an electrically conductive roller, reducing undesirable indoor ozone pollution. Additionally, lightning rods use corona discharge to create conductive paths in the air that point towards the rod, deflecting potentially-damaging lightning away from buildings and other structures.[2]

Corona discharge ozone generators have been used for more than 30 years in the water purification process. Ozone is a toxic gas, even more potent than chlorine. In a typical drinking water treatment plant, the ozone gas is dissolved into the filtered water to kill bacteria and viruses. Ozone also removes the bad odours and taste from the water. The main advantage of ozone is that the overdose (residual) decomposes to gaseous oxygen well before the water reaches the consumer. This is in contrast with chlorine which stays in the water and can be tasted by the consumer.

Corona discharges are also used to modify the surface properties of many polymers. An example is the corona treatment of plastic materials which allows paint or ink to adhere properly. 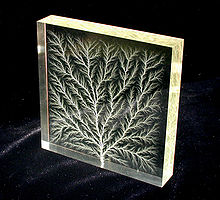 Dielectric breakdown within a solid insulator can permanently change its appearance and properties.