The refraction of a light in a prism is due to dispersion.

In physics and electrical engineering, dispersion most often refers to frequency-dependent effects in wave propagation. Note, however, that there are several other uses of the word "dispersion" in the physical sciences.

In the presence of dispersion, wave velocity is no longer uniquely defined, giving rise to the distinction of phase velocity and group velocity. A well-known effect of phase velocity dispersion is the color dependence of light refraction that can be observed in prisms and rainbows.

Dispersion relations describe the interrelations of wave properties like wavelength, frequency, velocities, and refractive index. Besides geometry- and material-dependent dispersion relations, there are the overarching Kramers–Kronig relations that connect the frequency dependences of propagation and attenuation.

Dispersion may be caused either by geometric boundary conditions (waveguides, shallow water) or by interaction of the waves with the transmitting medium. Elementary particles, considered as matter waves, have a nontrivial dispersion relation even in the absence of geometric constraints and other media.

Dispersion occurs when pure plane waves of different wavelengths have different propagation velocities, so that a wave packet of mixed wavelengths tends to spread out in space. The speed of a plane wave, v, is a function of the wave's wavelength λ:

The wave's speed, wavelength, and frequency, f, are related by the dispersion relation

Dispersion relations are more commonly expressed in terms of the angular frequency ω = 2πf and wavenumber k = 2π / λ. Rewriting the relation above in these variables gives

The use of ω(k) to describe the dispersion relation is standard because both the phase velocity ω/k and the group velocity dω/dk have convenient representations via this function.

The elementary sorts of waves being considered can be described by

A is the amplitude of the wave,
A0 = A(0,0),
x is a position along the wave's direction of travel, and
t is the time at which the wave is described.

Plane waves in vacuum are the simplest case of wave propagation: no geometric constraint, no interaction with a transmitting medium.

For electromagnetic waves in vacuum, the frequency is proportional to the wavenumber:

This is a linear dispersion relation. In this case, phase velocity and group velocity are the same:

they are given by c, the speed of light in vacuum, a frequency-independent constant. 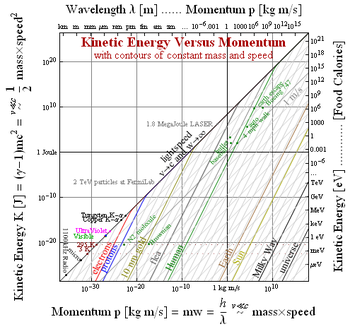 The free-space dispersion plot of kinetic energy versus momentum, for many objects of everyday life.

Total energy, momentum, and mass of particles are connected through the relativistic relation

which in the ultrarelativistic limit is essentially

and in the nonrelativistic limit is

where in both equations m is the rest mass. In the nonrelativistic limit, mc2 is essentially constant and p2 / (2m) is the familiar kinetic energy in terms of momentum p = mv.

The transition from ultrarelativistic to nonrelativistic behaviour shows up as a slope change from p to p2 as shown in the log-log dispersion plot of E vs. p.

Elementary particles, atomic nuclei, atoms, and even molecules behave in some context as matter waves. According to the de Broglie relations, their kinetic energy E can be expressed as a frequency ω, and their momentum p as a wavenumber k, using the reduced Planck constant ħ:

Accordingly, frequency and wavenumber are connected through a dispersion relation, which in the nonrelativistic limit reads

As mentioned above, when the focus in a medium is on refraction rather than absorption i.e. on the real part of the refractive index, it is common to refer to the functional dependence of frequency on wavenumber as the dispersion relation. For particles, this translates to a knowledge of energy as a function of momentum.

The name "dispersion relation" originally comes from optics. It is possible to make the effective speed of light dependent on wavelength by making light pass through a material which has a non-constant index of refraction, or by using light in a non-uniform medium such as a waveguide. In this case, the waveform will spread over time, such that a narrow pulse will become an extended pulse, i.e. be dispersed. In these materials,

is known as the group velocity[2] and corresponds to the speed at which the peak propagates, a value different from the phase velocity.[3]

The dispersion relation for deep water waves is often written as

where g is the acceleration due to gravity. Deep water, in this respect, is commonly denoted as the case where the water depth is larger than half the wavelength.[4] In this case the phase velocity is

and the group velocity is

Waves on a string

Two-frequency beats of a non-dispersive transverse wave. Since the wave is non-dispersive, phase (red) and group (green) velocities are equal.

For an ideal string, the dispersion relation can be written as

where T is the tension force in the string and μ is the string's mass per unit length. As for the case of electromagnetic waves in a vacuum, ideal strings are thus a non-dispersive medium i.e. the phase and group velocities are equal and independent (to first order) of vibration frequency.

In the study of solids, the study of the dispersion relation of electrons is of paramount importance. The periodicity of crystals means that many levels of energy are possible for a given momentum and that some energies might not be available at any momentum. The collection of all possible energies and momenta is known as the band structure of a material. Properties of the band structure define whether the material is an insulator, semiconductor or conductor.

Phonons are to sound waves in a solid what photons are to light: They are the quanta that carry it. The dispersion relation of phonons is also important and non-trivial. Most systems will show two separate bands on which phonons live. Phonons on the band that cross the origin are known as acoustic phonons, the others as optical phonons.

Isaac Newton studied refraction in prisms. He failed, however, to recognize the material dependence of the dispersion relation. Had he done so, he would almost certainly have invented the achromatic lens.[6]

Dispersion of waves on water was studied by Pierre-Simon Laplace in 1776.[7]

The universality of the Kramers-Kronig relations (1926/27) became apparent with subsequent papers on the dispersion relation's connection to causality in the scattering theory of all types of waves and particles.[8]