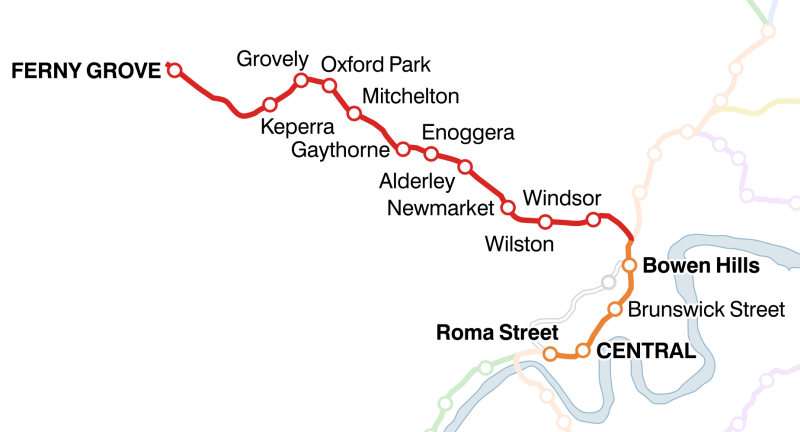 The Ferny Grove railway line is an an railway line extending 12.1 km (7.5 mi) northwest from Brisbane (16.1 km from Central station by rail), the state capital of , . It is part of the QR network.

On , a packed excursion train derailed at Camp Mountain, after Ferny Grove railway station, in what is Queensland's worst rail tragedy, the .

As part of a larger rationalisation by the of its train lines, the line was closed from Dayboro back to Ferny Grove in 1955 due to declining traffic.

Work is currently underway to duplicate the track between Mitchelton and Keperra, and also to upgrade the intervening stations, Oxford Park and Grovely, to two platforms. This upgrade will allow additional services to operate on the line during peak hour, and will also remove waiting times outbound from Mitchelton and inbound from Keperra.

Most services stop at all stations to Roma Street railway station. The typical travel time between Ferny Grove and Brisbane City is approximately 27 minutes (to Central). During weekday peak times, a few services may skip stations between Enogerra and Bowen Hills for faster travel times for commuters working in the .

Passengers for/from the Airport, Caboolture, Doomben, Nambour and Gympie North and Shorncliffe lines change at Bowen Hills, and all other lines at Central.