The Empire's origins are explained in Star Wars Episode III: Revenge of the Sith, where it replaces the Galactic Republic in the midst of a galactic civil war orchestrated by Palpatine, then the Republic's Supreme Chancellor. In a scene towards the end of the film, Palpatine appoints himself Emperor in the presence of the Galactic Senate, afterward the Imperial Senate. By the time of A New Hope, the Empire has transformed into a fully totalitarian regime, with opposition in the form of the Rebel Alliance.

The Galactic Empire is described in various Star Wars media as a brutal dictatorship, one based on "tyranny, hatred of nonhumans, brutal and lethal force, and, above all else, constant fear."[1]

The Galactic Empire is born out of the collapsing Old Republic. However, the seeds of change are planted during the Clone Wars, the epic war between the Republic and the Confederacy of Independent Systems depicted in Attack of the Clones.

When the extent of the Separatist threat becomes clear in Episode II, the Old Republic Senate, the legislature of the Republic, grants Palpatine emergency powers to deal with the crisis. This conflict allows Palpatine to remain in office long after his term as Chancellor officially expires. Palpatine promises to return his powers to the Senate once peace and order is restored to the galaxy. His first order is to create an army of clone troopers. He takes advantage of the conflict to increase the office's power until by Episode III, he is effectively a dictator.

The Jedi begin to distrust the Chancellor's motives, fearing he has come under the influence of a Sith Lord named Darth Sidious. Their concerns are shared by several Senators, who suspect Palpatine may not return his emergency powers to the Senate as promised. Among them are two who had long supported Palpatine, Padmé Amidala and Bail Organa. The film eventually reveals that Palpatine and Sidious are one and the same, and that he has been manipulating the Republic and the Separatists against each other.

When the Jedi Knight Anakin Skywalker discovers Palpatine is actually Darth Sidious, he returns to the Jedi Temple to inform Jedi Master Mace Windu what he has learned. Windu then leaves with three other Masters to arrest Palpatine, instructing Anakin to remain at the temple. Anakin ignores Mace Windu's directive and returns to the Chancellor's office to prevent the Jedi from killing him; Palpatine has manipulated him into believing that he has the power to save Anakin's pregnant wife, Padmé Amidala, from dying in childbirth. The cadre of Jedi try to apprehend Palpatine, who quickly produces a lightsaber and dispatches all but Windu. When Anakin arrives, Windu is standing over the disarmed Palpatine, prepared to strike. Anakin intervenes on Palpatine's behalf by cutting off Windu's hand, allowing Palpatine to send Windu plunging to his death with a blast of Force lightning. Anakin then submits to the dark side of the Force, becoming Palpatine's Sith apprentice, Darth Vader.

Palpatine declares the Jedi to be traitors and enemies of the Republic, and issues Order 66, a secret order he implanted in the clones to overthrow their Jedi commanders. In a matter of hours, nearly all Jedi are wiped out across the galaxy. Secure in his power and position, Palpatine reorganizes the Republic into the Galactic Empire, with himself as Emperor for life. The Senate enthusiastically supports Palpatine's "safe and secure society", although a few, like Padmé and Organa, realize that the freedom enshrined by the Republic is in serious jeopardy. A deleted scene in the film establishes that the two are among the main founders of the Rebel Alliance, which later arises in A New Hope.

Two remaining Jedi, Obi-Wan Kenobi and Yoda, attempt to attack and destroy the Sith once and for all. Yoda confronts Palpatine, and Obi-Wan duels his former apprentice, now Darth Vader. Obi-Wan defeats Vader, but Yoda's duel with Palpatine ends with Yoda being beaten and forced to flee for his life; both Jedi are forced to go into exile. Padme's children, now parentless except for a Sith Lord, are placed into adoptive families until such time as the living force reaches out to them and they take up their destiny.

Led by Darth Vader, the Emperor's Army of stormtroopers all but exterminate the Jedi Order. 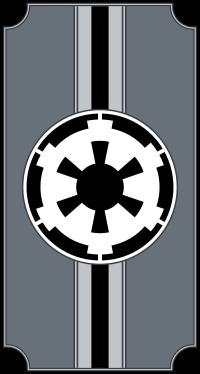 Banner of the Galactic Empire

With the end of the Clone Wars and the formation of the First Galactic Empire, Palpatine rules the Empire with absolute power, with third-in-command Sate Pestage as Grand Vizier to run the Empire day to day. Vader is the Emperor's second-in-command as well as his chief enforcer. During the time after Revenge of the Sith to Return of the Jedi, Palpatine rules the galaxy from the confines of his heavily guarded palace on Coruscant. During that same time, Vader travels extensively to most of the galactic regions to enforce the Emperor's rule.

Palpatine dissolves the Senate in A New Hope because the Empire discovers several seats in the Senate are actually taken by members of the Rebellion. By this point, however, the Senate had been been effectively powerless for some time. Aside from Palpatine, the real power in the Empire is in the hands of planetary governors, sector governors (the "moffs") and Grand Moffs overseeing collections of sectors such as Grand Moff Tarkin. Eventually, these regional governors are granted direct control over their territories after Palpatine formally disbands the Imperial Senate.

In A New Hope, Tarkin explains the Empire's philosophy as "rule through fear of force rather than force itself." The instrument of this power is the military, which includes the Imperial Stormtroopers, Scout Troopers, Sandtroopers, SCUBA troopers, Snowtroopers, and a large fleet of intimidating war vehicles such as the Imperial Navy's Star Destroyers and the Imperial Army's All Terrain Armoured Transports (AT-ATs or imperial walkers) which are intended in part to spread fear as well as destroy the enemy. This policy reaches its zenith with the construction of the Death Star, a moon-sized superweapon. Plans for the Death Star first appear (in universe chronology) in Attack of the Clones; construction begins at the end of Revenge of the Sith.

The Imperial Army is the main ground force of the Galactic Empire. It operates massive ground combat vehicles and maintains garrisons across the galaxy. It also cooperates with other branches of the Empire in a variety of operations. The Imperial Army consists of a considerable number of legions, enough to project power throughout the galaxy. Some of the legions are stationed on the capital planet Coruscant as part of the Emperor's security, while others are scattered in the Imperial Navy and planetary garrisons across the galaxy. Imperial Army officers and crew typically wear black uniforms when not clad in armor.

At its peak, the Imperial Navy fielded at least tens of thousands of warships and fulfilled the Emperor's will throughout the galaxy. After its defeat at the Battle of Endor, the Galactic Empire splits up into warring factions and the Imperial Starfleet splinters along with it. While much of the remnants of the Imperial Navy were later reunited under impressive Imperial commanders, the military organization covered in this article ceased to exist shortly after the death of the Emperor.

In The Force Unleashed, three influential senators — Bail Organa of Alderaan, Garm Bel Iblis of Corellia, and Mon Mothma of Chandrila — meet in secret to form the Alliance to Restore the Republic, more commonly referred to as the Rebel Alliance. During the two decades that take place between Revenge of the Sith and A New Hope, the Rebellion's early groups are all but crushed by the Empire, and its leaders are constantly forced into hiding or killed.

The Death Star, a moon-sized space station (whose construction begins at the end of Episode III) with sufficient firepower to destroy an entire planet, is designed to be the supreme weapon of the Empire's power. Grand Moff Willhuff Tarkin, the station's commander, demonstrates that power in A New Hope, when he destroys Alderaan merely as a show of force. In the film's climactic scene, however, the station is assaulted by a small force of Rebel starfighters; the battle ends with the Death Star's destruction at the hands of Luke Skywalker. The victory is the Rebel Alliance's first major success against the Empire.

A critical blow is struck against the Empire in Star Wars Episode VI: Return of the Jedi. In the film's climactic battle, the Rebellion destroys the second Death Star and a great portion of the Imperial Navy's highest ranking officers. During this battle, Vader is redeemed by throwing Palpatine to his death, but is mortally wounded by Force lightning intended to kill his son, Luke.

In the Expanded Universe, the Rebels, renamed the New Republic, fight to claim the galaxy from remaining Imperials styling themselves as independent controllers of portions of the galaxy.

In the Jedi Prince novel series, a group of impostors calling themselves the Prophets of the Dark Side install a three-eyed mutant named Trioculus as Emperor by claiming that he is Palpatine's son. By the end of the series, Palpatine's true son, Triclops, helps the Rebels defeat this new enemy.

In the Thrawn trilogy book series, the New Republic is almost brought to its knees by Grand Admiral Thrawn, the new leader of the remnants of the Empire and a military genius. By the time of the third book in the series, Thrawn has nearly defeated the New Republic, but they claim victory in a last-ditch effort, and Thrawn is killed by his own bodyguard, shattering the Empire's unity.

In the Dark Empire comic book series, Palpatine is reborn in a clone body and unites most of the scattered remnants of the Empire, hoping to retake control of the galaxy. By the sequel, Empire's End, he is defeated and destroyed once and for all.

In the Jedi Academy Trilogy, an Imperial admiral named Daala commandeers the remainder of the Imperial Navy and mounts a ferocious assault on the New Republic. She nearly succeeds in taking over the galaxy, but is foiled by New Republic pilots Wedge Antilles and Lando Calrissian in the final entry, Champions of the Force.

In the novel Darksaber, Admiral Daala, frustrated with the Imperial warlords in the Core fighting and bickering amongst themselves, orchestrates the warlords' deaths and unites and becomes the leader of the remaining Imperial forces. After being defeated in battle once again by the New Republic, she resigns and selects Gilad Pellaeon (originally in the Thrawn Trilogy) as the new leader, where he becomes Grand Admiral Pellaeon.

By the time of the New Jedi Order series, the remaining Imperial military factions sign a truce with the New Republic, becoming the Imperial Remnant. The former enemies then become allies against the invading Yuuzhan Vong.

Star Wars creator George Lucas sought to make the Galactic Empire aesthetically and thematically similar to Nazi Germany and to appear to be fascist.[2] Like Nazi Germany, the Galactic Empire is a dictatorship based on rigid control of society that dissolved a previous democracy and is led by an all-powerful supreme ruler.[3] The Empire like the Nazis desires the creation of totalitarian order.[4] The Empire and the Nazis' regime utilize excessive force and violence to achieve their ends.[5] The name of the Empire's main soldiers, the Stormtroopers, is the same name given to Hitler's Sturmabteilung (SA) paramilitary bodygaurds.[6] The visual appearance of Darth Vader in his all-black uniform combined with his devout obedience to the Emperor has allusion to the black-uniformed Nazi Schutzstaffel (SS).[7] The uniforms of Imperial military officers also bear resemblance to uniforms used in Nazi Germany as well as nineteenth-century Germany's ulans (mounted lancers)—who wore a tunic, riding breeches, and boots like the Empire's officers wear—as well as the Imperial officers' cap resembling the field caps historically worn by German and Austrian troops.[8]