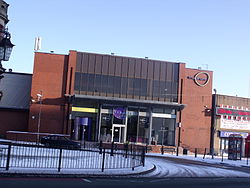 The Drum (grid reference SP072890) is an arts centre in the Newtown area of Aston, in Birmingham, England, established as the United Kingdom's national centre for Black British and British Asian arts. Activities include music, drama, spoken word, visual arts, comedy and dance.

The Drum occupies the site of the former Aston Hippodrome, which was a major variety theatre between 1908 and 1960. The Aston Hippodrome saw the likes of Charlie Chaplin, Laurel and Hardy, Judy Garland and Morecambe and Wise performing there. The building was demolished in 1980, but in 1991 Birmingham City Council set up a project to re-launch a cultural facility on the site to specifically reflect the highly diverse culture of the surrounding area. The Drum started hosting events in 1994, the first event in 1994 was an exhibition called Negritude. In 1996 the famous celebrity Cleo Lane accepted the lottery cheque on behalf of The Drum. The Drum was fully opened in 1998 and hosted its very first ticketed event.

The Drum has two auditoria - the 350 seat main auditorium and the 120 seat Andy Hamilton Studio - along with, an exhibition space, a cafe-bar, a business suite and a multimedia production suite.