The Diocese of Talibon is one of the 72 ecclesiastical territories called dioceses of the Roman Catholic Church in the Philippines. It is one of two dioceses in the province of Bohol and is part of the ecclesiastical province of the Archdiocese of Cebu. It comprises half of the civil province of Bohol, Philippines. It was created on January 9, 1986, separating half of Bohol from the Diocese of Tagbilaran. [1] There are 25 parishes in the diocese, ministered to by 50 priests. There are also 35 religious sisters active in the running of 16 secondary Catholic schools. The vocations to the priesthood are thriving, and trust in Divine Providence is the main recourse of the poor inhabitants, mostly farmers and fishermen. [1]

In an annual retreat in July 1993, initiatives were taken by the local clergy to formulate a vision-mission statement in answer to the momentum of renewal ushered in by the Second Plenary Council of the Philippines. In 1995, the clergy ventured into an introductory planning of a five-year diocesan pastoral program to involve the lay faithful in the formulation of a vision-mission statement and a diocesan pastoral plan.

The Diocesan Curia and Board of Consultors have already been set up. The pastoral commissions are now operative and capably manned. The parish pastoral councils are in full swing in their activities and have been most effective in assisting the clergy in the administration of parishes. 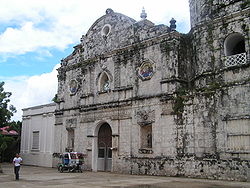