Al-Kamil (Arabic: الكامل‎) (full name: al-Malik al-Kamel Naser al-Din Abu al-Ma'ali Muhammed) (1180–1238) was a Kurdish Ayyubid sultan who ruled North Africa. During his tenure as sultan, the Ayyubids defeated two crusades. In a temporary agreement with the Crusaders, he ceded Jerusalem to the Christians.

He was the son of sultan al-Adil, a brother of Saladin. In 1218 al-Kamil led the defense during the Siege of Damietta against the Fifth Crusade, and later that year became sultan when his father died. In 1219 he was almost overthrown by a conspiracy among Coptic Christians, and considered fleeing to Yemen until the conspiracy was put down by his brother al-Mu'azzam, governor of Damascus.

Al-Kamil made many offers of peace to the Crusaders, all of which were rejected, due to the influence of the papal legate Pelagius. He offered to return Jerusalem and rebuild its walls (which his brother had torn down earlier in the year), and to return the True Cross (which he probably did not have). At one point he even negotiated with Francis of Assisi, who had accompanied the crusade, and who apparently tried to convert the sultan.

Due to famine and disease after the Nile failed to flood, al-Kamil could not defend Damietta and it was captured in November of 1219. The sultan withdrew to al-Mansourah, a fortress further up the Nile. After this there was little action until 1221, when al-Kamil offered peace again, but was again refused. The Crusaders marched out towards Cairo, but al-Kamil simply opened the dams and allowed the Nile to flood, and finally the Crusaders accepted an eight-year peace. He retook Damietta in September. 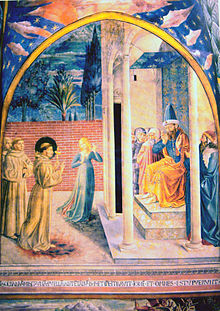 Saint Francis of Assisi with the Sultan al-Kamil.15th century.

In the following years there was a power struggle with his brother al-Mu'azzam, and al-Kamil was willing to accept a peace with emperor and King of Sicily Frederick II, who was planning the Sixth Crusade. Al-Mu'azzam died in 1227, eliminating the need for a peace, but Frederick had already arrived. After al-Mu'azzam's death, al-Kamil and his other brother al-Ashraf Khalil negotiated a treaty giving all of Palestine (including Transjordan) to al-Kamil and Syria to al-Ashraf. In February of 1229 al-Kamil negotiated a ten-year peace with Frederick II and returned Jerusalem and other holy sites to the Crusader kingdom.

The treaty of 1229 is unique in the history of the Crusades. By diplomacy alone and without major military confrontation, Jerusalem, Bethlehem, and a corridor running to the sea were ceded to the kingdom of Jerusalem. Exception was made for the Temple area, the Dome of the Rock, and the Aqsa Mosque, which the Muslims retained. Moreover, all current Muslim residents of the city would retain their homes and property. They would also have their own city officials to administer a separate justice system and safeguard their religious interests. The walls of Jerusalem, which had already been destroyed, were not rebuilt, and the peace was to last for 10 years.[1]

Nevertheless many Muslims were still opposed to this treaty, as were many Christians, including the Patriarch of Jerusalem, who placed an interdict over the holiest city in Christianity (Frederick ignored it). After this there was peace with the Crusaders, but al-Kamil had to contend with the Seljuks and the Khwarezmians before he died in 1238.

His sons as-Salih Ayyub and al-Adil II succeeded him in Syria and Egypt respectively, but the Ayyubid empire soon descended into civil war. In 1239 the treaty with Frederick expired, and Jerusalem came under Ayyubid control.

The Crusades of 1239 to 1241, under Thibaut IV of Champagne and Richard of Cornwall, brought about the return of the city as well as other lost territories through negotiation. However, in 1244 an alliance of Jerusalem and Damascus failed to prevent the capture and sack of Jerusalem by Khwarezmians with Egyptian aid. All the diplomatic gains of the preceding years were lost. Once again the Christians were confined to a thin strip of ports along the Mediterranean coast.[1]