Cuauhtémoc (also known as Cuauhtemotzin, Guatimozin or Guatemoc; c. 1495[1] – 28 February 1525) was the Aztec ruler (tlatoani) of Tenochtitlan from 1520 to 1521. The name Cuāuhtemōc (Nahuatl pronunciation: [kʷaːʍˈtemoːk]) means "One That Has Descended Like an Eagle", commonly rendered in English as "Swooping Eagle" as in the moment when an eagle folds its wings and plummets down to strike its prey, so this is a name that implies aggressiveness and determination.

Cuauhtémoc took power in 1520 as successor of Cuitláhuac and was a cousin of the former emperor Moctezuma II, and his young wife, who would later be known as Isabel Moctezuma, was one of Moctezuma's daughters.[1] He ascended to the throne when he was 25 years of age,as his city was being besieged by the Spanish and devastated by an epidemic of smallpox brought to the New World by Spanish Invaders. Probably after the killings in the main temple, there were few Aztec captains available to take the position.

On August 13, 1521, Cuauhtémoc went to call for reinforcements from the countryside to aid the falling Tenochtitlán, after eighty days of continuous urban warfare against the Spanish. Of all the Nahuas, only Tlatelolcas remained loyal, and the surviving Tenochcas looked for refuge in Tlatelolco where even women took part in the battle. Cuauhtémoc was captured while fleeing Tenochtitlán by crossing Lake Texcoco in disguise with his wife, family, and friends. He surrendered to Hernán Cortés along with the surviving pipiltin (nobles), and offered him his knife and asked to be killed.

At first, Cortés treated his foe chivalrously. "A Spaniard knows how to respect valor even in an enemy," he declared. However, he allowed Aldrete, the royal treasurer, to have Cuauhtemoc tortured to make him reveal the whereabouts of hidden treasure. Cuauhtémoc, insisting that there was no hidden treasure, stood up under the ordeal.[1] 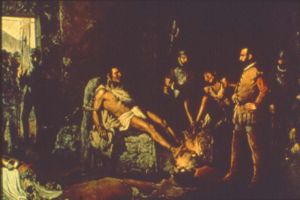 "The Torture of Cuauhtémoc", a 19th century painting by Leandro Izaguirre.

Cuauhtémoc was tortured by having his feet put to a fire, along with Tetlepanquetzal, the tlatoani of Tlacopán, and the Cihuacóatl (counselor) Tlacotzin, but even so they refused to divulge information about the treasures the Spanish coveted. It is said that during the torture, Tetlepanquetzal asked him to reveal the location of the treasures in order to stop the pain given to them, and Cuauhtémoc is quoted to say "Do you think I am in a bath for pleasure?" This would be popularized in the 19th century as "Do you think I am in a bed of roses?" The date and details of this episode are unknown. In the end, a shamed Cortés delivered Cuauhtémoc from Aldrete's hands.

Eventually Cortés recovered some gold from a noble's house, but most of the tales about "Aztec gold" were a myth. Since for the Aztecs, gold had no intrinsic value[verification needed], they did not have big solid pieces of gold, instead they preferred wood covered with gold. After those pieces were melted, they only gave a fraction of the gold that Cortés and his men expected. 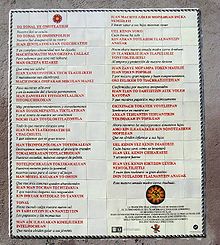 In 1525, Cortés took Cuauhtémoc and several other indigenous nobles on his expedition to Honduras, fearing that Cuauhtémoc could have led an insurrection in his absence.[2] While the expedition was stopped in the Chontal Maya capital of Itzamkanac, known as Acalan in Nahuatl, Cortés had Cuauhtémoc executed for allegedly conspiring to kill him and the other Spaniards. 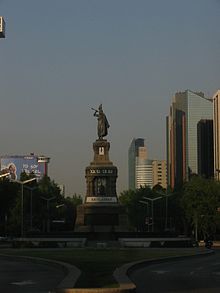 Statue of Cuauhtémoc on Avenida Reforma in Mexico City. The inscription at the bottom of the statue translates as "In memory of Cuauhtémoc (spelled Quautemoc) and his warriors who battled heroically in defense of their country."

There are a number of discrepancies in the various accounts of the event. According to Cortés himself, on 27 February 1525 it was revealed to him by a citizen of Tenochtitlan named Mexicalcingo that Cuauhtémoc, Coanacoch (the ruler of Texcoco) and Tetlepanquetzal (the ruler of Tlacopan) were plotting his death. Cortés interrogated them until each confessed, and then had Cuauhtémoc, Tetlepanquetzal, and another lord named Tlacatlec hanged. Cortés wrote that the other lords would be too frightened to plot against him again, as they believed he had uncovered the plan through magic powers. Cortés's account is supported by the historian Francisco López de Gómara.[3]

According to Bernal Díaz del Castillo, a conquistador serving under Cortés who recorded his experiences in his book The Conquest of New Spain, the supposed plot was revealed by two men, named Tapia and Juan Velásquez. Díaz portrays the executions as unjust and based on no evidence, and admits to having liked Cuauhtémoc personally. He also records Cuauhtémoc giving the following speech to Cortés, through his interpreter Malinche:

Oh Malinzin[i.e., Cortés]! Now I understand your false promises and the kind of death you have had in store for me. For you are killing me unjustly. May God demand justice from you, as it was taken from me when I entrusted myself to you in my city of Mexico!

Díaz wrote that afterwards, Cortés suffered from insomnia due to guilt, and badly injured himself while wandering at night.[4]

Fernando de Alva Cortés Ixtlilxóchitl, a Mestizo historian and descendant of Coanacoch, wrote an account of the executions in the 17th century partly based on Texcocan oral tradition.[2] According to Ixtlilxóchitl the three lords were joking cheerfully with each other, due to a rumor that Cortés had decided to return the expedition to Mexico, when Cortés asked a spy to tell him what they are talking about. The spy reported honestly, but Cortés invented the plot himself. Cuauhtémoc, Coanacoch and Tetlepanquetzal were all hanged, as well as eight others. However, Cortés cut down Coanacoch, the last to be hanged, after his brother began rallying his warriors. Coanacoch did not have long to enjoy his reprieve—Ixtlilxóchitl wrote that he died a few days later.[5] 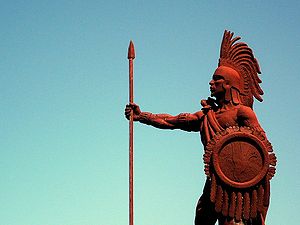 Monument to Cuauhtémoc in Veracruz, Mexico

The modern-day town of Ixcateopan in the state of Guerrero is home to an ossuary purportedly containing Cuauhtémoc's remains.

Many places in Mexico are named in honour of Cuauhtémoc. These include Ciudad Cuauhtémoc in Chihuahua and the Cuauhtémoc borough of the Mexican Federal District. There is also a Cuauhtémoc station on the Mexico City metro and the Monterrey Metrorrey. Cuauhtémoc is also one of the few non-Spanish given names for Mexican boys that is perennially popular. In the Aztec campaign of the PC game Age of Empires II: The Conquerors, the player plays as Cuauhtémoc, despite the name Montezuma for the campaign itself, and Cuauhtémoc narrates the openings and closings to each scenario. In the next installment to the series, Age of Empires 3: The War Chiefs, Cuauhtémoc was the leader of Aztecs.

In the 1996 Rage Against The Machine single People of the Sun, lyricist Zack De La Rocha rhymes "When the fifth sun sets get back reclaimed, The spirit of Cuauhtémoc alive an untamed".

Cuauhtémoc, in the name Guatemoc, is portrayed sympathetically in the adventure novel Montezuma's Daughter, by H. Rider Haggard. First appearing in Chapter XIV, he becomes friends with the protagonist after they save each other's lives. His coronation, torture, and death are described in the novel.