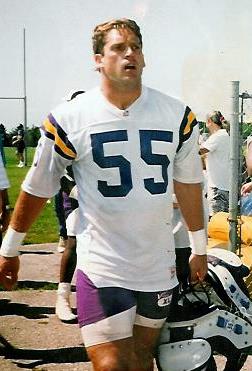 Jack Lebron Del Rio, Jr. (born , in ) is a former player and is the current head coach of the .

Del Rio attended and played football for in Hayward, .

Del Rio was an n at the and was MVP of the 1985 Rose Bowl. Drafted by baseball’s in 1981, Del Rio batted .340 while playing catcher on USC’s baseball team with and . In football, during his senior year, he earned consensus honors as a senior and was runner-up for the .

Del Rio's roommate at USC was .

Underscoring the rivalry between USC and UCLA, Del Rio, on December 12, 2006, appeared at a press conference wearing a UCLA basketball jersey after losing a bet with current Jaguars and ex-UCLA running back [http://video.nbcsports.com/player/?id=50049] . UCLA's football team had recorded one of the biggest upsets in school history by defeating USC the previous week. However, after acknowledging his loss in the bet, he removed the UCLA jersey, revealing a USC polo shirt underneath.

He is a member of the Fraternity.

Del Rio began his coaching career with the in 1997 as the Strength and Conditioning coach. In 1999, he accepted a position with the as their linebackers coach. He is in part credited for the success of the Ravens' defense, particularly the 2000 Ravens' defense. After the 2001 season, he was named of the . In his first season as defensive coordinator, he led them to the second best defense in the league that season.

In 2003, Del Rio became the second head coach of the following 's dismissal. In his first season, he led the team to a 5-11 record. In 2004, the Jaguars narrowly missed the playoffs with a 9-7 record, the first winning record in five seasons. The following season, the team made the playoffs as a wild card team; however, the season was ended with a 28-3 loss to the . Del Rio was quoted as saying: "This wasn't our year, it was the Steelers'. Next year is ours." Fact|date=February 2007

During his first season with the Jaguars, after the team started 0-3, Del Rio had a massive tree stump and placed in the team locker room. He also placed a sign that had his new team , "Keep Chopping Wood". It was intended to indicate how they were to slowly whittle away the huge obstacle in the way of improving the team. While most of the team was out for practice, punter took a swing, missed the stump and seriously injured his non kicking foot.Fact|date=October 2008 Hanson missed the remainder of the 2003 season, being replaced by .Fact|date=October 2008

Del Rio became the second NFL head coach to wear a suit on the sidelines since 1993 during a November 20, 2006 regular season contest against the , immediately following head coach who had sported the look the previous day in a win over the .

Del Rio's Jaguars won that game by a score of 26-10. Previously, a sponsorship deal between the NFL and prohibited coaches from wearing anything but Reebok clothing, but a series of events -- including Nolan petitioning for permission to wear a suit and Reebok planning to unveil a formal line of clothing in 2007 -- led to the NFL adopting a rule that permits coaches to wear a suit two times a year. [ [http://www.firstcoastnews.com/sports/jags/news-article.aspx?storyid=69687 First Coast News] ] During the 2007 NFL season, both Del Rio and Nolan were given permission to wear a suit at all eight of their respective teams regular season home games.

In August 2007, Del Rio demoted starting quarterback and one day later, surprisingly cut him from the roster. He had said the previous winter that there would not be quarterback competition this year and Leftwich would be his starter. Nine days before the start of the 2007 Leftwich was replaced by David Garrard. The move paid off, as Del Rio lead the Jaguars to an 11-5 record, good for 2nd place in the AFC South and a wild card spot in the playoffs as the #5 seed. Jacksonville defeated the 31-29 at to advance to the AFC Divisional Playoff round, but their season ended with a 31-20 road loss to the .

Del Rio is currently the only head coach in the NFL.