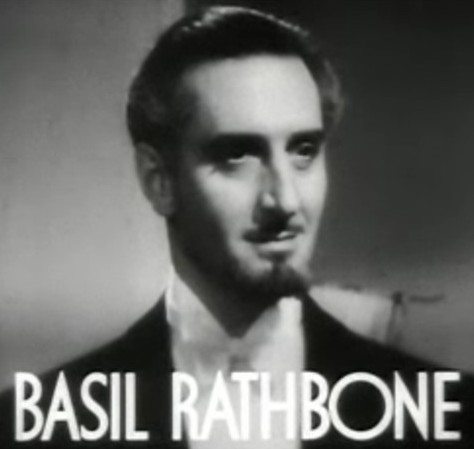 Basil Rathbone, MC (13 June 1892 – 21 July 1967), was a South African-born English most famous for his portrayal of and of suave villains in such films as "The Mark of Zorro", "Captain Blood", and "The Adventures of Robin Hood".

He was born Philip St. John Basil Rathbone in , , to English parents Edgar Philip Rathbone, a mining engineer and scion of the , and Anna Barbara née George, a . He had two younger siblings, Beatrice and John. The Rathbones fled to England when Basil was three years old, after his father was accused by the s of being a British spy near the onset of the at the end of the 1890s.

Rathbone was educated at and was engaged with the Liverpool and Globe Insurance Companies. In 1916, he enlisted for the remaining duration of , joining the [ [http://www.londonscottishregt.org London Scottish Regiment : UK Territorial Army Regiment ] ] as a Private, serving alongside his future successful acting contemporaries , and . He later transferred with a commission as a Lieutenant to the , 2nd Battalion, where he served as an and eventually attained the rank of Captain. During the war, Rathbone displayed a penchant for disguise (a skill which he ironically shared with what would become perhaps his most memorable character, ) when on one occasion, in order to have better visibility, Rathbone convinced his superiors to allow him to scout enemy positions during daylight hours instead of during the night, as was the usual practice in order to minimize the chance of detection by the enemy. Rathbone completed the mission successfully through his skillful use of , which allowed him to escape detection by the enemy. In September 1918, he was awarded the . His younger brother John was killed in action during the war while also serving Britain.

On 22 April 1911, Rathbone made his first appearance on stage at the Theatre Royal, , as Hortensio in "", with Sir Frank Benson's No. 2 Company, under the direction of Henry Herbert. In October 1912, he went to America with Benson's company, playing such parts as Paris in "", Fenton in "", and Silvius in "". Returning to England, he made his first appearance in London at the on 9 July 1914, as Finch in "The Sin of David". That December, he appeared at the as the Dauphin in "Henry V". During 1915, he toured with Benson and appeared with him at London's Court Theatre in December as Lysander in "".

During the Summer Festival of 1919, he appeared at with the New Shakespeare Company playing Romeo, Cassius, Ferdinand in "", and Florizel in ""; in October he was at London's as the Aide-de-Camp in "Napoleon", and in February 1920, he was at the in the title role in "Peter Ibbetson" with huge success.

During the 1920s, Rathbone appeared regularly in Shakespearean and other roles on the English stage. He began to travel and appeared at the Cort Theatre, in October 1923, and toured in the United States in 1925, appearing in in May and the Lyceum Theatre, in October. He was in the US again in 1927 and 1930, and in 1931 when he appeared on stage with . He continued his stage career in England, returning to the US late in 1934 where he appeared with in several plays.

He was admired for his athletic cinema swordsmanship (he listed among his favourite recreations). He fought and lost to in a duel on the beach in "Captain Blood" and in an elaborate fight sequence in "The Adventures of Robin Hood". He was involved in noteworthy sword fights in "Tower of London"; "The Mark of Zorro" and "" (1956). Despite his real-life skill, Rathbone only won once onscreen, in "Romeo and Juliet" (1936). Rathbone earned Academy Award nominations for Best Actor in a Supporting Role for his performances as Tybalt in "Romeo and Juliet" (1936), and as King in "" (1938). In "The Dawn Patrol" (1938), he played one of his few heroic roles in the 1930s, as a (RFC) squadron commander brought to the brink of a by the strain and guilt of sending his battle-weary pilots off to near-certain death in the skies of 1915 France. Errol Flynn, Rathbone's perennial foe, starred in the film as his successor when Rathbone's character is promoted.

According to Hollywood legend, Rathbone was 's first choice to play in the film version of her novel "". The reliability of this story may be suspect, however, as on another occasion, Mitchell chose for the role, apparently in jest.

Despite his film success, Rathbone always insisted that he wished to be remembered for his stage career. He said that his favorite role was that of Romeo.

Rathbone is most widely recognized for his starring role as in fourteen movies between 1939 and 1946, all of which co-starred as . The first two films, "The Adventures of Sherlock Holmes" and "The Hound of the Baskervilles" (both 1939) were set in the late-Victorian times of the original stories. Both of these were made by . Later installments, made at , beginning with "" (1942), were set in contemporary times, and some had -related plots. Rathbone and Bruce also reprised their film roles in a radio series, "" (1939 - 1946).

The many sequels typecast Rathbone, and he was unable to remove himself completely from the shadow of Holmes. However, in later years, Rathbone willingly made the Holmes association, as in a TV sketch with in the early 1950s, in which he donned the cap and Inverness cape.

Rathbone also brought Holmes to the stage in a play written by his wife Ouida. , who had appeared as a ringleader in "", played the villainous . Nigel Bruce was too ill to take the part of Dr. Watson, and it was played by Jack Raine. Bruce's absence depressed Rathbone, particularly after Bruce died on 8 October 1953, while the play was in rehearsals. The play ran only three performances.

Rathbone also appeared on Broadway numerous times. In 1948, he won a for Best Actor for his performance as the unyielding Dr. Austin Sloper in the original production of "The Heiress", which featured as his timid, spinster daughter. He also received accolades for his performance in 's "J.B.", a modernization of the Biblical trials of Job.

He is also known for his recordings, including his interpretation of 's "". Rathbone's readings of the stories and poems of are collected together with readings by in 's "The Edgar Allan Poe Audio Collection" on CD. Rathbone also made many other recordings, of everything from a dramatized version of "", to a recording of 's "" (with conducting), to a dramatized version of 's "". [ [http://www.basilrathbone.net/recordings Basil Rathbone: Master of Stage and Screen - Recordings ] ]

On television he appeared in two musical versions of Dickens's "A Christmas Carol", one in 1954, in which he played opposite 's Scrooge, and the original 1956 live-action version of "", in which he starred as a singing Ebenezer Scrooge.

In the 1960s, he also toured with a one-man show titled (like his autobiography) "In and Out of Character". In this show, he recited poetry and Shakespeare, as well as giving reminiscences from his life and career (e.g., the humorous, "I could have killed Errol Flynn any time I wanted to!"). As an encore, he recited Vincent Starrett's famous poem "221B."

Vincent Price and Rathbone appeared together, along with , in "Tower of London" (1939) and "Comedy of Terrors" (1964). The latter was the only film to feature the "Big Four" of American International Pictures' horror films - Price, Rathbone, Karloff, and Peter Lorre. Rathbone also appeared with Price in the final segment of 's 1962 anthology film "Tales of Terror", a loose dramatization of Poe's "Facts in the Case of M. Valdemar".

Rathbone married actress Ethel Marion Foreman in 1914. They had one son, Rodion Rathbone (1915-1996), who had a brief Hollywood career under the name John Rodion. The couple d in 1926. Rathbone was involved briefly with actress . In 1927, he married writer . Basil and his second wife adopted a daughter, Cynthia Rathbone (1939-1969).

During Rathbone's Hollywood career, his second wife (who was also his business manager) developed a reputation for hosting elaborate expensive parties in their home, with many prominent and influential people on the guest lists. This trend inspired a joke in "The Ghost Breakers", a movie in which Rathbone does not appear: during a tremendous thunderstorm, Bob Hope observes that "Basil Rathbone must be throwing a party".

The actress Mrs. Patrick Campbell described Rathbone as "two profiles pasted together". [In and Out of Character, Basil Rathbone]

Unlike some of his British actor contemporaries in Hollywood and Broadway, Rathbone never renounced his . His autobiography, "In and Out of Character", was published in 1962.

Rathbone and his portrayal of Sherlock Holmes was the inspiration for the children's book series "" and the later Disney film, "".

Rathbone's villainous roles inspired the portrayal of the regenerated Master in the "" novel "" by .

In the 2003 comedy film "", the naming of the chief antagonist Lord Rathbone, was an homage to Basil Rathbone.