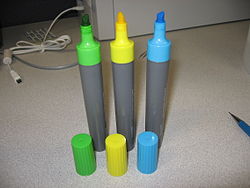 A highlighter is a felt-tip pen which is used to draw attention to sections of documents by marking them with a vivid, translucent colour.[1] A typical highlighter is fluorescent yellow, coloured with pyranine.[2]

In 1962, the modern felt-tip pen was invented in Japan by Yukio Horie.[3] A highlighter is a felt-tip pen filled with transparent fluorescent ink. Avery Dennison Corporation invented and trademarked the name Hi-Liter. The new writing tool became popular and was called highlighter.

A pair of highlighters

Many highlighters come in bright, often fluorescent colours. Being fluorescent, highlighter ink will glow under a black light.[4] The most common colour for highlighters is yellow, but they are also found in pink, blue, green, orange, and purple varieties. Red highlighters can be purchased along with a green translucent sheet used to hide the highlighted material. This product is sold in Japan and some other countries, and can also be bought online. Some yellow highlighters may look greenish in colour to the naked eye.

Highlighters are available in multiple forms including ones with a retractable felt tip or ones which have an eraser on the opposite end of the felt tip. Other types of highlighters include the "trilighter," a triangularly-shaped pen with a different-coloured tip at each corner, and ones that are stackable.

Dry highlighters (occasionally called "dry line highlighters") are highlighters that, instead of having a felt tip, have applicators that apply a strip of highlighter tape similar to audio cassette tape. Unlike standard highlighters, they are easily erasable. They are to be distinguished from "dry mark highlighters", which are sometimes advertised as being useful for highlighting books with very thin pages. 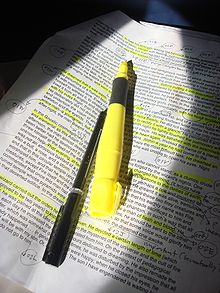 Yellow highlighting on a page of photocopied text