Sir Clifford Sifton, PC, KCMG (March 10, 1861 – April 17, 1929) was a Canadian politician best known for being Minister of the Interior under Sir Wilfrid Laurier. He was responsible for encouraging the massive amount of immigration in Canada which occurred in the first decade of the 20th century.

Born in Middlesex County, Canada West (now Ontario), Sifton's father, John Wright Sifton, was a contractor and businessman who moved with his family to Manitoba when Clifford was a boy. He trained as a lawyer, and graduated from Victoria University in the University of Toronto in 1875. He worked on his father's political campaigns before being elected to the Legislative Assembly of Manitoba, himself, in 1888. Sifton served in the cabinet of Thomas Greenway from 1891 to 1896 as Attorney General and Provincial Lands Commissioner. He played a role in negotiating the Laurier-Greenway Compromise, which temporarily resolved the Manitoba Schools Question.

In 1896, Sifton was elected a Member of Parliament and served as Minister of the Interior under Laurier. As Minister of the Interior he started a vigorous immigration policy to get people to settle and populate the West. Sifton established colonial offices in Europe and the United States. He enticed people to come to western Canada. While many of the immigrants came from Britain and the United States, Canada also had a large influx of Ukrainians, Doukhobors, and other groups from the Austro-Hungarian Empire. Between 1891 and 1914, more than three million people came to Canada, largely from continental Europe, following the path of the newly constructed continental railway. In the same period, mining operations were begun in the Klondike and the Canadian Shield.

In the federal election of 1900, Sifton retained his seat against a strong challenge from former Manitoba Premier Hugh John Macdonald. After presiding over the creation of Alberta and Saskatchewan in 1905, Sifton resigned from cabinet following a dispute with Laurier over religious education.

Sifton retired from politics in 1911, but crusaded against the government policy of reciprocity, because he believed that increased economic integration between Canada and the US would result in Canada being taken over by the Americans.[2]

Sifton died in 1929 in New York City, where he had been visiting a heart specialist. He left a fortune estimated at $3.2 million, equivalent to about $41 million in present-day terminology.[3] 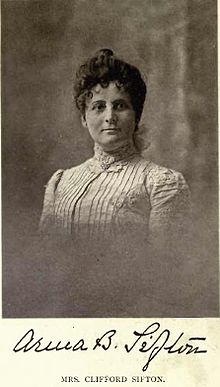 Clifford Sifton, then a young lawyer married at Winnipeg, Manitoba on August 18th, 1884 Elizabeth Armanella Burrows, daughter of Henry James Burrows and his wife, Sarah Sparks. Elizabeth was born in Ottawa, Ontario and educated at the Ladies' College, in Ottawa. The couple had five sons. She founded and presided over the Woman's Christian Temperance Union (W.C.T.U.) at Brandon, Monitoba. She served as President of the Women's Hospital Aid Society, and of the Women's Society formed in connection with the Methodist Church. She presided over similar bodies in Ottawa and volunteered with the National Council of Women. The couple lived in 215 Metcalfe Street, Ottawa. [4]