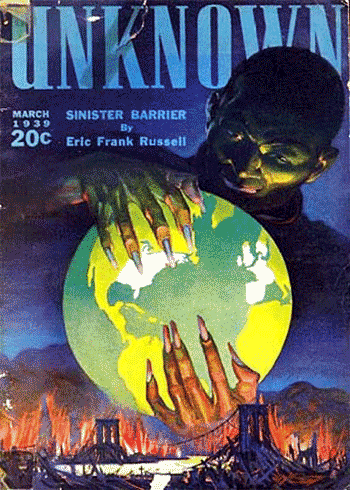 Unknown (also known as Unknown Worlds) was a pulp , edited by , that was published from 1939 to 1943. "Unknown" was closely associated with the science fiction magazine "", which was also edited by Campbell at the time; many authors and illustrators contributed to both magazines.

In keeping with its relation to "Astounding Science Fiction", the style and approach of the stories in "Unknown" was a hybrid between those of fantasy and science fiction. The premises of many of the stories were caused by unexpected, and often humorous, situations in which a traditional fantasy creature or concept is introduced into an otherwise ordinary world. For example, in de Camp’s "Nothing in the Rules", the manager of a swimming team tries to win a race by including a on the team.

"Unknown" also included some science fiction which used the themes of traditional fantasy. For example, "Darker than You Think" uses the premise that werewolves exist, but that they are not supernatural, and explains the traditional beliefs about them without using fantasy.

From its first issue until the end of 1940, the magazine was published on a monthly basis. From February 1941 through its demise, "Unknown" came out bi-monthly. From February 1940 through August 1941, the magazine went by the title "Unknown Fantasy Fiction", and for the rest of its publication run, it was known as "Unknown Worlds". Money was saved on the last few issues by printing them without an illustration on the cover. Wartime paper shortages were blamed for the cancellation of the magazine.

In 1948, an anthology called "From Unknown Worlds" was edited by Campbell and published by Street and Smith in an attempt to see whether the market would support a resurrected "Unknown", but nothing came out of it. The anthology collected stories previously published in "Unknown" and was available as a pulp size paperback and as a hardcover.

's story "Author! Author!" was accepted by Campbell for publication in "Unknown", but the magazine was cancelled before it could appear. It eventually appeared in "The Unknown Five".