The airport is the largest in eastern India and one of only two international airports operating in West Bengal, the other being in Bagdogra. It is a major centre for flights to North-East India, Bangladesh and Southeast Asia.

Kolkata airport has a distinguished place in the history of aviation, traditionally serving as a strategic stopover on the air route from Europe to Indochina and Australia.[1] Many pioneering flights passed through the airport, including that of Amelia Earhart in 1937.[2] The airport was originally an open ground next to the Royal Artillery Armoury in Dum Dum.[3] In 1924, KLM began scheduled stops at Kolkata, as part of their Amsterdam to Batavia (Jakarta) flight[4] The same year, a Royal Air Force aircraft landed in Kolkata as part of the first round-the-world expedition by any air force.[5]

Sir Stanley Jackson, Governor of Bengal, opened the Bengal Flying Club at Kolkata aerodrome in February 1929.[6] In 1930, the airfield was made fit for use throughout the year,[7] and other airlines began to utilise the airport. Air Orient began scheduled stops as part of a Paris to Saigon route,[8] and Imperial Airways began flights from London to Australia via Kolkata in 1933.[9] This began a trend that drew many airlines to Kolkata airport.

Kolkata played an important role in the Second World War. In 1942, the United States Army Air Force 7th Bombardment Group flew B-24 Liberator bombers from the airport on combat missions over Burma. The airfield was also used as a cargo aerial port throughout the war for supplies and equipment by Air Transport Command, as well as being a communication centre for the Tenth Air Force.[10]

Passenger services grew after the Second World War. Kolkata became a destination for the world’s first jet-powered passenger aircraft, the de Havilland Comet, on a British Overseas Airways Corporation (BOAC) route to London. Furthermore, in 1964 Indian Airlines introduced the first Indian domestic jet service, using Caravelle jets on the Calcutta - Delhi route. The international terminal was opened in 1970, which saw the introduction of flights from airlines such as Japan Airlines, Qantas, Swiss Air and Cathay Pacific.[11] However, the 1971 Bangladesh Liberation War saw a large increase in both refugees and disease in Kolkata, causing some airlines to cease services to the city. In 1975, the airport opened the first dedicated cargo terminal in India.[12]

The 1990s saw new growth for Kolkata airport, as the Indian aviation industry saw the arrival of new airlines such as Jet Airways and Air Sahara. The current domestic terminal was opened in 1995, and the airport was renamed in honour of Netaji Subhas Chandra Bose.[13] In 2000, a new international arrival hall was opened. Finally, 2005 saw the growth of Low Cost Carriers in the Indian aviation sector, with new airlines including SpiceJet, IndiGo and Kingfisher Airlines. This led to a dramatic rise in passenger numbers at the airport. 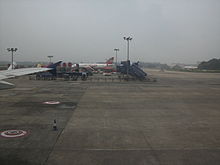 The airport has three terminals: a domestic terminal, an international terminal and a cargo terminal. The domestic terminal was extended in 2009 to cater to an increasing demand of passengers. New ticketing counters, check-in kiosks and cafes were added. The airport has four aerobridges, with three in the domestic terminal and one in the international terminal. The current terminals have reached over-capacity, as there has recently been a huge increase in the number of passengers travelling through the airport. It is expected that the airport will handle additional four million passengers every year from 2012, up from the 1.01 million now it handles.[14] Passenger lounges are provided by Air India, Jet Airways, and Kingfisher Airlines. Catering facilities are owned by Taj-Sats and Oberoi Flight Services.

The airport has two parallel runways 01/19 L/R, of which the longer one, 01R/19L is used for takeoffs and landings, while the other one is used mostly as a taxiway and for aircraft landing during daytime. The expansion of this runway is hampered by a 119-year old mosque that lies 100 feet north of the runway, within the airport property.[15]. Air India operates hangars at the airport, while Bharat Petroleum and Indian Oil act as fuellers.

The the Airports Authority of India (AAI) has recently added cargo-handling capacity to the airport, which is sufficient to cater to the demand up to 2015-16. There has been a 25 per cent growth in international cargo movement to and from Kolkata airport and a 15 per cent increase in outward transit. Automobile parts accounted for the bulk of the growth in the movement of cargo from the city to other countries. In November 2008 the first Centre for Perishable Cargo (CPC) in West Bengal was opened at the airport. The CPC has an area of 742.5 m2 (7,992 sq ft) and an annual storage capacity of 12,000 million tonnes. The CPC had been undergoing trials that started in June 2008 and was built with a

6.75 crore (US$1.37 million) grant-in-aid from the Agricultural and Processed Food Products Export Development Authority (APEDA) part of the Commerce Ministry.[16] The volume of export was 21,683 ton in 2008-09, during the current fiscal more than 23,042 ton of cargo were handled by the NSCBI authorities. Similarly the volume of import cargo was increased from 16,863 ton to 18,733 ton recording more than ten per cent jump during the same period. However, in 2008-09 the total volume of cargo handled by the airport declined by 4.8% from the previous year.

Kolkata airport is connected to the Kolkata Suburban Railway system, and is also accessible by taxi and low floor Volvo buses. The proposed Kolkata Metro route from Noapara to Barasat will have a station at the airport by the name of Jai Hind. [17]

The airport is being provided with a face-lift by the AAI, which is building a fourth terminal for the airport . A Thai-based consortium along with Kolkata-based Sikka Associates have been hired to carry this modernisation task.

The work on this new integrated terminal started in November 2008. The terminal will be an L-shaped structure with two-tiers for arrivals and departures. The 40,000 m2 (430,000 sq ft) of the first phase of modernisation is designed to accommodate a peak flow of 1,800 passengers per hour. Once completed, the total capacity of the airport will increase to 24 million passengers per year. The new terminal building will have 104 check-in counters, 44 immigration counters, 25 security gates, five conveyor belts and 15 aerobridges. It will also have an inline baggage system, making it unnecessary for passengers to scan luggage through x-ray machines before check in. The walls will be decorated with murals depicting the writing of Bengali poet and Nobel laureate Rabindranath Tagore, while the use of natural day lighting will be used without increasing cooling fees. The form of the roof is devised to harvest rainwater for landscape irrigation. Finally, an underground parking for cars is under construction.[18]

The airport will be commissioned for commercial use by March 2012[19]. The existing domestic terminal building will continue to be used with appropriate modifications and façade treatment, whilst the former airport hotel 'Ashok' has been demolished to give way to two new five-star luxury hotels and a shopping mall in its place. 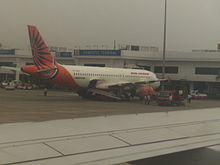 An Indian A320 at the domestic terminal