All That Heaven Allows

All That Heaven Allows 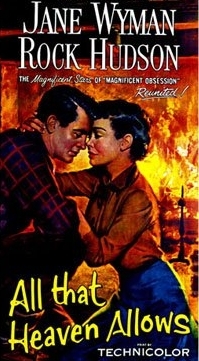 "All That Heaven Allows" (1955) is a romance starring and in a story about a well-to-do widow falling in love with a young landscape designer. The screenplay was written by based upon a story by and . The film was directed by and produced by . In 1995, the film was selected for preservation in the United States . "All That Heaven Allows" has been broadcast on American television and is available in VHS and DVD format.

"All That Heaven Allows" is a melodrama set in a small town. Cary Scott () is a well-to-do gradually re-entering a social life amongst her mostly dull peers. Her only apparent enjoyment in life comes from weekend visits from her college-age children. Cary then meets a handsome younger man, Ron (), who owns a small landscaping business. Ron is a follower of 's "", and "hears a different drummer", enjoying a life focused on nature; he is deliberately uninterested in the gossipy opinions of others. Their romance causes clashes and tensions between Cary, her children and the folk but, in defiance of social norms, the two are united at film's end.

Universal-International Pictures wanted to follow up on the pairing of Wyman and Hudson from Douglas Sirk's "". Sirk found the screenplay for "All That Heaven Allows" "rather impossible" but was able to restructure it and use the big budget to film and edit the work exactly the way he wanted.Fact|date=February 2007

Then talk not of inconstancy,False hearts, and broken vows:If I by miracle can beThis live-long minute true to thee,'Tis all that heaven allows. [ [http://www.bartleby.com/101/414.html 414. Love and Life. John Wilmot, Earl of Rochester. The Oxford Book of English Verse ] ]

Bosley Crowther generally panned the film and commented in the "" of , 1956: "The script was obviously written to bring [Wyman] and Mr. Hudson, who made a popular twosome in the "," together again. Solid and sensible drama plainly had to give way to outright emotional bulldozing and a paving of easy clichés." [ [http://movies.nytimes.com/movie/review?res=9506E5DB153CE03BBC4151DFB466838D649EDE "New York Times" Review] ]

In 1995, "All That Heaven Allows" was selected for preservation in the United States by the as being "culturally, historically, or aesthetically significant".

References in other films