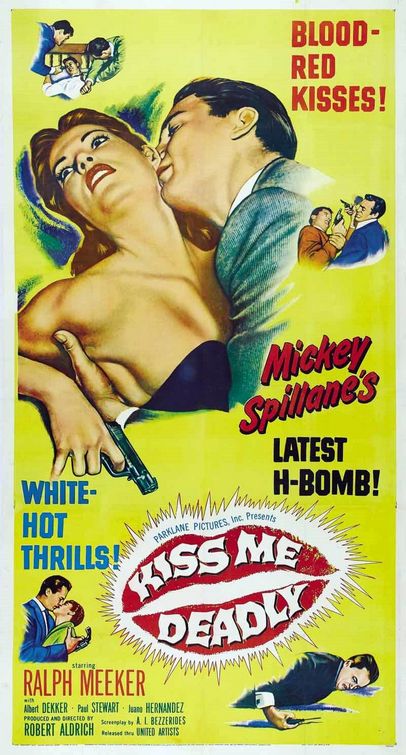 
"Kiss Me Deadly" (1955) is a drama produced and directed by starring . The screenplay was written by , based on the mystery novel "". Spillane ordered to pulp 50,000 copies of the book because they left the comma out. [ [http://books.guardian.co.uk/obituaries/story/0,,1823306,00.html Sutherland, John] . Mickey Spillane] "The Guardian," Obituaries, . Last accessed: .]

Meeker plays Mike Hammer, a tough private eye who is just slightly less brutal and corrupt than the crooks he chases.

One evening, Hammer gives a ride to Christina (), an attractive hitchhiker he picks up on a lonely country road. Thugs waylay them and force his car to crash. When Hammer returns to semi-consciousness, he hears Christina being tortured until she dies. Hammer, both for vengeance and in hopes that "something big" is behind it all, decides to pursue the case.

It develops that "the great whatsit" (as Hammer's assistant Velda (Maxine Cooper) calls it) at the center of Hammer's quest is a small, mysterious valise that is hot to the touch and contains a dangerous glowing substance.

It is ultimately revealed to be stolen material, which in an apocalyptic final scene apparently reaches explosive criticality when the box is fully opened.

The original American release of the film shows Hammer and Velda escaping from the burning house at the end, running into the ocean as the words "The End" come over them on the screen. Sometime after its first release, the ending was crudely altered on the film's original negative, removing over a minute's worth of shots where Hammer and Velda escape and superimposing the words "The End" over the burning house. This implied that Hammer and Velda perished in the atomic blaze, and was often interpreted to represent the End of the World. In 1997, the original conclusion was restored. The DVD release has the correct original ending, and offers the now-discredited (but influential) truncated ending as an extra.

* as Mike Hammer
* as Dr. G.E. Soberin
* as Carl Evello
* as Eddie Yeager
* as Lt. Pat Murphy
* Marian Carr as Friday
* Maxine Cooper as Velda
* as Christina Bailey
* as Gabrielle
* as Nick
* Jack Lambert as Sugar Smallhouse
* as Charlie Max
* Jerry Zinneman as Sammy
* as Cheesecake
* as Doc Kennedy

Critical commentary generally views it as a for the and nuclear fears of the era in which it was filmed. [Prince, Stephen, "Visions of Empire: Political Imagery in Contemporary American Film", Praeger/Greenwood, 1992, ISBN 0275936627.]

Although a leftist at the time of the , Bezzerides denied any conscious intention for this meaning in his script. About the topic, he said, "I was having fun with it. I wanted to make every scene, every character, interesting." [ [http://news.independent.co.uk/people/obituaries/article2169227.ece Vallance, Tom] . "The Independent", Obituary, "A. I. Bezzerides. No-nonsense novelist/screenwriter," . Last accessed: March 25, 2008.]

The review aggregator reported that 100% of critics gave the film a positive review, based on nineteen reviews." [ [http://www.rottentomatoes.com/m/kiss_me_deadly/ "Kiss Me Deadly"] at . Last accessed: March 25, 2008.]

In 1999, "Kiss Me Deadly" was selected for preservation in the United States by the as being "culturally, historically, or aesthetically significant."

The original novel, while providing much of the plot, is about a conspiracy and does not feature and the nuclear suitcase, elements added to the film version by the scriptwriter, .

It further subverted Spillane's book by portraying the already tough Hammer as a narcissistic bully, the darkest of private detectives in the film noir genre. He apparently makes most of his living by blackmailing adulterous husbands and wives, and he takes an obvious sadistic pleasure in violence, whether he's beating up thugs sent to kill him, breaking an informant's treasured record collection, or roughing up a coroner who's slow to part with a piece of information. Bezzerides wrote of the script: "I wrote it fast because I had contempt for it ... I tell you Spillane didn't like what I did with his book. I ran into him at a restaurant and, boy, he didn't like me." [Bergan, Ronald "The Guardian", Obituary, "A.I. Bezzerides: Screenwriter victim of the Hollywood blacklist, he is renowned for three classic American film noirs," .]