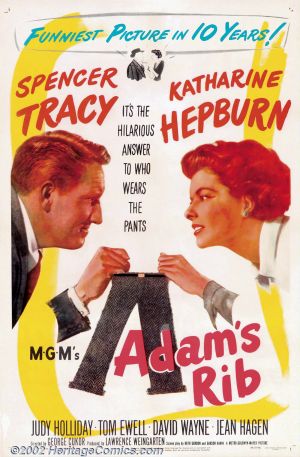 "Adam's Rib" is a 1949 film starring and and directed by . The film was well-received upon its release and is considered a classic romantic comedy. , who went on to fame in 1950's "Born Yesterday", received her first substantial role in this film. The music was composed by , except for the song "Farewell, Amanda", which was written by .

Prosecutor Adam Bonner (Tracy) is assigned the case against a woman (Holliday) who tried to scare her adulterous husband () by shooting him repeatedly. Bonner's wife, Amanda (Hepburn), also a lawyer, decides to defend the woman in court. As the two use every technique they know to win the case, the courtroom tension carries over into the couple's household.

The defendant, Doris Attinger, when narrating to Amanda Bonner her version of the events on the day she shot her husband, describes recognizable s of a dissociative episode. These include a divorcement from the reality of her actions and even psychogenic amnesia concerning her actual wounding of her husband. Given that, one might have expected Amanda to ask the jury for a verdict of not-guilty-by-reason-of-insanity, because the defendant had been seized by an .

But instead, Amanda asks for a simple verdict of not guilty, because all the defendant did was to "try to defend her home", and a man acting similarly might be acquitted. In short, she asks for , and wins the case.

(later of "Rosemary's Baby" and "" fame) and were nominated for the Academy Award for Best Screenplay in 1950. In the decades since the film's release, it has attracted the esteem of many critics. In 1992, "Adam's Rib" was selected for preservation in the United States by the as being "culturally, historically, or aesthetically significant".

* Judy Holliday had been starring on Broadway in "" and Columbia Pictures bought the screen rights. (Columbia's President) refused to consider Holliday the chance to recreate her role, so Cukor, Kanin, Gordon, Hepburn and Tracy conspired to offer the smallish part of Doris Attinger to Holliday, expand the part, as a sort of 'audition' for their friend, Judy Holliday. It worked; Holliday's performance was critically acclaimed and Columbia subsequently offered her the part and she won an Academy Award for it! (Note; that during jailhouse intervew, Cukor kept the camera on Holliday and Hepburn told Cukor, "Don't cutaway to me; keep the camera on Judy".)

Quotations from the movie

:"Tell me something. What is marriage? I'll tell you what it is: Marriage is a contract. It's the law."

:""Licorice, mmmm. If there's anything I'm a sucker for, it's licorice."

:"What blow you think you were striking for women's rights, I am sure I don't know, but you've certainly fouled us up beyond all recognition."

:"Lawyers should never marry other lawyers. This is called inbreeding, from which comes idiot children and more lawyers."