Infobox Film
name = All That Jazz 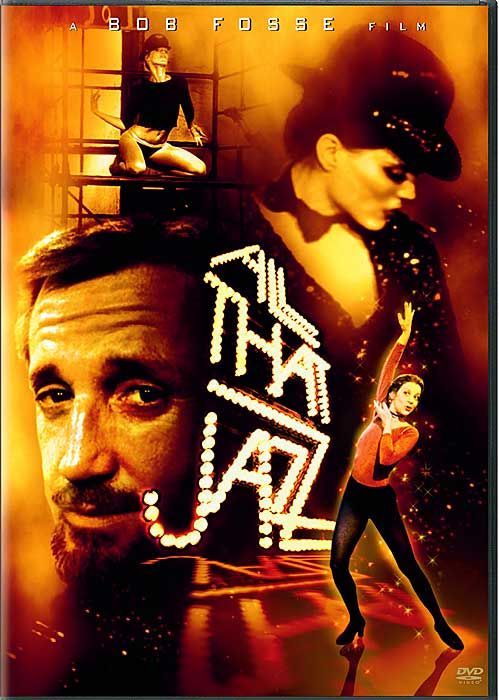 "All That Jazz" is a winning 1979 American directed by . The screenplay by and Fosse is a semi-autobiographical based on aspects of the dancer, choreographer, and director's life and career. The film was inspired by Fosse's manic effort to edit his film "Lenny" while simultaneously staging his 1975 Broadway musical "Chicago". It borrows its title from a tune in that production.

Choreographing and casting for dancers for his next Broadway show, while editing his severely over-budget and over-schedule Hollywood production about a standup comic is getting to Joe Gideon. He is a workaholic choreographer and theater director who chain-smokes and chain-sleeps with all of his dancers. Without a daily dose of Vivaldi, , , Dexedrine and sex, he wouldn't have the energy to keep up the biggest show of them all — his life. His girlfriend Katie Jagger, his ex-wife Audrey Paris and daughter Michelle try to pull him back from the brink, but it is too late for his exhausted body and stress-ravaged heart. Decades of overworking and constant tremendous stress have gotten to Gideon. In his imagination, he already flirts with an angel of death named Angelique.

Gideon's condition gets worse, as after a particularly stressful script rehearsal with the penny-pinching backers, he is taken to a hospital with chest pains and admitted with severe attacks of angina. Joe tries to take it in his stride and walk straight back to the rehearsal, but is ordered to stay for three to four weeks to rest his heart and recover from his exhaustion. The show is postponed, but Gideon continues his antics from the hospital bed. Champagne flows, endless string of women frolic around and the cigarettes are always lit. Cardiogram readings don't show any improvement - Gideon is playing with death. As the paltry reviews for his feature film (which has been released without him) come in, Gideon has a massive coronary and is taken straight to .

The backers for the Broadway show must decide now whether it's time to pack up or replace Gideon as the director. Their matter-of-fact money-oriented negotiations with the insurers are juxtaposed with graphic scenes of open heart surgery. They realize the best way to recoup their money, even make a profit, is to bet on Gideon dying — which would bring in a profit of over USD$500,000 — not bad in the crazy unpredictable world of showbiz. Meanwhile, elements from Gideon's past life are staged into a dazzling sequence of set-ups — himself directing from the hospital bed, while on life support. Realizing his death is imminent, his mortality unconquerable, Gideon has another heart attack. In glittery musical numbers, he goes through the five phases of grief — denial, anger, bargaining, depression and acceptance. As death closes in on Gideon, the fantasy episodes become more hallucinatory and extravagant and in a final epilogue that is set up as a truly monumental live variety show featuring everyone from his past, Gideon himself takes center stage.

", another thinly-veiled autobiographical film with fantastical elements [ [http://movies.nytimes.com/movie/review?res=9803E2DF1538E732A25753C2A9649D946890D6CF Vincent Canby in the "New York Times"] ] [ [http://www.avclub.com/content/node/7299 DVD review in "The Onion: A.V. Club"] ] . Cliff Gorman's role of a difficult and self-obsessed actor portraying a real-life notorious stand-up comic was seen by many as a personal rebuke to , the star of "Lenny". Gorman had originated the title role of on Broadway, winning a for his performance. He had been considered a favorite to reprise the role in the film adaptation but was passed over for a "name" actor, Hoffman.

Gideon's rough handling of chorus girl Victoria Porter closely resembles Fosse's own treatment of Jennifer Nairn-Smith during rehearsals for "Pippin" ["All His Jazz: The Life & Death of Bob Fosse" by Martin Gottfried, Da Capo Press, 1990] . Nairn-Smith herself appears in the film as Jennifer, one of the "NY/LA" dancers.

The film is available on a "Special Music Edition" DVD released by Fox in 2007. Its Oscar-winning editor, Alan Heim, does the commentary. The previous DVD from 2003 features a scene-specific commentary by Roy Scheider, and interviews with Scheider and Fosse.

It scores a 96% "fresh" (or "good") rating on the movie review aggregation site "" [rotten-tomatoes|id=all_that_jazz|title=All That Jazz] .

In his review in the "", called the film "an uproarious display of brilliance, nerve, dance, maudlin confessions, inside jokes and, especially, ego" and "an essentially funny movie that seeks to operate on too many levels at the same time... some of it makes you wince, but a lot of it is great fun... A key to the success of the production is the performance of Roy Scheider as Joe Gideon... With an actor of less weight and intensity, "All That Jazz" might have evaporated as we watched it. Mr. Scheider's is a presence to reckon with." [ [http://movies.nytimes.com/movie/review?res=9803E2DF1538E732A25753C2A9649D946890D6CF "New York Times" review] ]

"Variety" described it as "a self-important, cal, wonderfully choreographed, often compelling film" and added, "Roy Scheider gives a superb performance as Gideon, creating a character filled with nervous energy... The film's major flaw lies in its lack of real explanation of what, beyond ego, really motivates [him] ." [ [http://www.variety.com/review/VE1117796599.html?categoryid=31&cs=1&p=0 "Variety" review] ]

"" says, "The dancing is frenzied, the dialogue piercing, the photography superb, and the acting first-rate, with non-showman Scheider an illustrious example of casting against type . . . "All That Jazz" is great-looking but not easy to watch. Fosse's indulgent vision at times approaches sour self-loathing." [ [http://www.tvguide.com/movies/jazz/review/111363 "TV Guide" review] ]

"" states, "As translated onto screen, [Fosse's] story is wretched: the jokes are relentlessly crass and objectionable; the song 'n' dance routines have been created in the cutting-room and have lost any sense of fun; Fellini-esque moments add little but pretension; and scenes of a real open-heart operation, alternating with footage of a symbolic Angel of Death in veil and white gloves, fail even in terms of the surreal." [ [http://www.timeout.com/film/reviews/77740/All_That_Jazz.html "Time Out London" review] ]

In 2001, the United States deemed the film "culturally significant" and selected it for preservation in the .