Oviraptoridae is a group of bird-like, herbivorous and omnivorous maniraptoran dinosaurs. Oviraptorids are characterized by their toothless, parrot-like beaks and, in some cases, elaborate crests. They were generally small, measuring between one and two metres long in most cases, though some possible oviraptorids were gigantic. The most well-known species and complete specimens all are found only in the Gobi Desert of Mongolia and northwestern China, though one possible sub-group, the elmisaurines, as well as the possible primitive species Microvenator celer lived in what is now North America. Definitive oviraptorids first appeared in the Cenomanian stage of the late Cretaceous Period (84 million years ago), although the possible oviraptorid Microvenator is known from the Aptian stage of the Early Cretaceous Period. The last known members became extinct at the end of the Maastrichtian stage, 65.5 million years ago.

Skull of an undescribed species

The most characteristic feature of this group is the skull structure. Oviraptorids had short snouts and very deep mandibles. Some taxa (Oviraptor, Citipati, Rinchenia) had a midline crest on top of the skull, resembling that of a cassowary. Other distinguishing characters include a bony spike intruding on the mandibular fenestra, nostrils placed very high and far back on the snout, an extremely thin bony bar beneath the eye, and highly pneumatized skull bones. Like their relatives the caenagnathids, the jaws were edentulous (with no teeth), having instead two small bony projections on the top jaw. 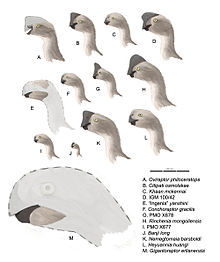 The classification of the oviraptorids has been controversial. Most early studies divided oviraptorosaurs into two primary sub-groups, the Caenagnathidae and the Oviraptoridae. The Oviraptoridae was further divided into the small, short-armed, and crestless subfamily "Ingeniinae" (the name was preoccupied by an invertebrate group), and the larger, crested, long-armed Oviraptorinae. However, later phylogenetic studies showed that many traditional members of the Caenagnathidae were in fact more closely related to the crested oviraptorids. Because Caenagnathus itself is no longer considered part of this group, the subfamily is usually now termed the Elmisaurinae. The taxonomy below follows the one presented by Thomas Holtz, Jr. in 2010.[1]

Almost all oviraptorids come from desert deposits of the Gobi Desert. Even in the late Cretaceous period, much of this area was desert, or at least very dry, habitat. In many of the localities where they are found, oviraptorids are among the most abundant dinosaurs present, second only to ankylosaurs and protoceratopsids. This is consistent with the idea that they were primarily herbivores, which tend to far outnumber carnivores in a given environment. Oviraptorids appear to have been far more abundant in arid habitats dominated mainly by small dinosaurs (such as those preserved in the Barun Goyot and Djadochta Formations) than in wetter ecosystems where large dinosaurs are common (such as the Nemegt Formation). The same pattern holds true for protoceratopsids, indicating that both groups preferred dry, desert-like habitat, and fed mainly on the types of tough, low-growing plant life that grows in arid climates.[2] 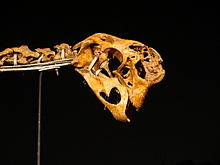 The diet of oviraptorids is not fully understood. Though some appear to have been at least partially carnivorous, they were probably primarily herbivorous.[2]

Originally, oviraptorids were thought to be specialized egg raiders, based on a Mongolian find showing Oviraptor on top of a nest erroneously attributed to the ceratopsian dinosaur Protoceratops. However, discoveries in the 1990s, including Citipati specimens clearly brooding (rather than predating) the same types of nests, and a Citipati embryo inside the same type of egg preserved in these nests, showed that the "specialized egg thief" idea was incorrect.[3] Still, some scientists have suggested that oviraptorids may have fed on shelled food items like eggs or shellfish. However, animals specialized for eating shelled food typically have broad, crushing beaks or teeth. In contrast, the jaws of oviraptorids had thin, sharp edges probably supporting shearing beaks, ill suited for cracking shells. Among other known animals, the beaks of oviraptorids most closely resemble those of herbivorous dicynodont synapsids, which are usually considered herbivorous. Their beaks also share similarities with the beaks of herbivorous parrots and tortoises.[2]

Evidence of partial carnivory among some oviraptorines comes from a lizard skeleton preserved in the body cavity of the type specimen of Oviraptor[4] and two hatchling Byronosaurus skulls found in a Citipati nest.[5] Some scientists have also suggested that some oviraptorids (especially the small-handed, weak-clawed "ingeniines") fed mainly on plant material.[2]

Although fossilized dinosaur eggs are generally rare, oviraptorid eggs are relatively well known. Several oviraptorid nests, eggs, and embryos are known, mostly uncovered in the Gobi Desert. Some specimens of the Oviraptor philoceratops and Citipati osmolskae have been found in brooding positions.[4] described in 1999,[6] All of the nesting specimens are situated on top of egg clutches, with their limbs spread symmetrically on each side of the nest, front limbs covering the nest perimeter. This brooding posture is found today only in birds and supports a behavioral link between birds and theropod dinosaurs.[6]

Oviraptorid eggs are shaped like elongated ovals (elongatoolithid) and resemble the eggs of ratite birds (such as ostriches) in texture and shell structure. In the nest, eggs are typically found in pairs and arranged in concentric circles of up to three layers, with complete clutches consisting of as many of 22 eggs in some species.[7] The eggs of Citipati are the largest known definitive oviraptorid eggs, at 18 cm. In contrast, eggs associated with Oviraptor are only up to 14 cm long.[6]

Ironically, it was the association with eggs that gave oviraptorids their name (which means 'egg thieves'). The first oviraptorid eggs (of the genus Oviraptor) were found in close proximity to the remains of the ceratopsian dinosaur Protoceratops and it was assumed that the oviraptorids were preying upon the eggs of the ceratopsians.[8] It was not until 1993, when a Citipati embryo was discovered inside an egg of the type assigned to Protoceratops, that the error was corrected.[3] Norell et al., who recognized the embryo as oviraptorid, assigned it to the genus Citipati. The egg containing the embryo was smaller than most known Citipati eggs at only 12 cm, though it was partially eroded and broken into three pieces, making an accurate estimate of its original size difficult.[6] The embryo-bearing egg was otherwise identical to other oviraptorid eggs in shell structure and was found in an isolated nest, again arranged in a circular pattern.[3]

An oviraptorosaurian specimen from China described in 2005 was found to have two unlaid eggs within the pelvic canal. This suggests that, unlike modern crocodilians, oviraptorosaurs did not produce and lay many eggs at the same time. Rather, the eggs were produced within the reproductive organs in pairs, and laid two at a time, with the mother positioned in the center of the nest and rotating in a circle as each pair was laid. This behavior is supported by the fact that the eggs oval shape, with the more narrow end pointing backward from the birth canal, matching their orientation toward the center of the nest after being laid.[9]

Oviraptorids were probably feathered, since some close relatives were found with feathers preserved (Caudipteryx and possibly Protarchaeopteryx).[10][11] Another finding pointing to this is the discovery in Nomingia of a pygostyle, a bone that results from the fusion of the last tail vertebrae and is responsible in birds to hold a fan of feathers in the tail.[12] Finally, the arm position of the brooding Citipati would have been far more effective if feathers were present to cover the eggs.[13]

The brooding oviraptorid specimen IGM 100/979 showed a callus and possible longitudinal groove leftover from a healed fracture of the right ulna. Other oviraptorids have had pathological features reported in their phalanges but these have not been described in detail in the scientific literature.[14]