The Forever People are a fictional group of extraterrestrial superheroes published by DC Comics. They first appeared in Forever People #1 (February 1971), and were created by Jack Kirby as part of his "Fourth World" epic.[1]

The heroes are a group of young New Gods from New Genesis who were on a mission to oppose Darkseid on Earth, and talked, dressed, and acted much like the flower children of the 1960s. In addition to the individual abilities and equipment of the members, the group can join together using the technology of a Mother Box to summon the powerful hero known as the Infinity-Man.[1] The group travelled by use of their Super-Cycle.

They first appeared in their own title, The Forever People, in 1971, which lasted eleven issues and ended on a cliffhanger. In the last issue, they summoned Infinity-Man, swapping places with him on a distant planet named Adon. Infinity-Man was apparently destroyed in combat with Devilance the Pursuer, leaving the Forever People stranded on Adon.

In 1988, a six issue Forever People limited series was published, showing what had happened to the Forever People on Adon. During this series, all the things that happened to them on the planet were reversed, and they were restored to our part of the universe. This series revealed that the Forever People were Earth born humans - infants doomed to die, but brought to New Genesis instead, and gathered to protect the human race. They returned to Earth to oppose 'the Darkness', a sentient but disembodied force of hopelessness. They were aided by a mysterious being named Maya, who was ultimately revealed to be the consciousness of their Mother Box.

During the events of Death of the New Gods, one of the mini-series that attempted to lead into Final Crisis, the human origin of the Forever People was retconned, and it was hinted that the five were to have been the first of the next evolution of the New Gods - godlings becoming more than the sum of their parts.

In 2007, Superman and Mister Miracle discover that The Forever People were murdered several months prior to the discovery of their bodies in Death of the New Gods, and it is later revealed that an impostor posing as Himon has been murdering the New Gods as an agent for the Source; but ultimately, the murderer turns out to be none other than the Infinity Man himself.

In the Final Crisis Sketchbook, the Forever People, along with other members of the New Gods are shown to be given updated looks, which Grant Morrison calls "more gothic art school student than flower power". In the event itself, Japan's pop culture team, the Super Young People, are transformed into the new Forever People at the end. 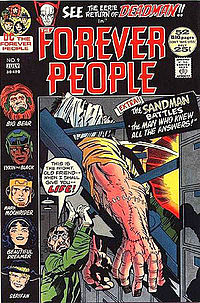 During the original Kirby run, Beautiful Dreamer had been linked romantically to Mark Moonrider, although outside of hand-holding, the exact nature of their relationship was never directly specified. In the 1988 miniseries, it was established that Dreamer had been married to Big Bear, and together they had a child, named Maya after the spirit of their old Mother Box. Since then, however, their marriage and daughter has been voided by a retcon during John Byrne's Jack Kirby's Fourth World series. When last shown, Dreamer was romantically involved with Takion, the new Highfather of New Genesis.

In Superman & Batman: Generations 3, she marries Superman, and has his children, Lar-El and Vara. All three are killed by Darkseid.

Beautiful Dreamer has psionic powers, with which she can create illusions. She has also been able, like other New Gods, to sense fluctuations within the Source.

Big Bear had been married to Beautiful Dreamer, and she had been pregnant with their daughter. A shift in time resulted in the marriage never happenening and the child never having existed. This traumatized Beautiful Dreamer for a time.

Big Bear can mentally alter the density of objects by manipulating its constituent atoms; this also gives him immense strength and near-invulnerability. In Forever People vol. 1, #7, he was shown to have been responsible for the historical event that led to the legend of King Arthur.

During the original Kirby run, Beautiful Dreamer had been linked romantically to Mark Moonrider, although outside of hand-holding, the exact nature of their relationship was never directly specified. In the 1988 miniseries set on Adon, Mark was shown to have fallen in love with, and later married one of the natives, Mina. They had 3 children together - Merry, Wendy and Starbright - but when the shift in time, caused by the Darkness' actions, undid the events which 'evolved' the natives, this marriage now never had occurred, leaving Mark with only his friends.

In addition to his leadership skills, Mark also has a Megaton Touch, which allows him to shoot bolts of energy from his hands.

Serifan is the youngest member of the group. With no super-powers, he is usually the most vulnerable. The Dark saw this and possessed Serifan, using him to conquer Forevertown and plague the Forever People. After the Dark was defeated he returned to his normal self.

Serifan has no super powers, but he dresses like a traditional cowboy and always carries "cosmic cartridges" for his six-shooters which possess numerous specific functions. Although all of the cartridges have never been catalogued, those seen in action have uses such as being able to generate an anti-gravitational force, create force fields, tune the wielder into the "cosmic Harmony" that is linked to the Source, and, in the case of the "Blue Cartridge", allow Deadman to merge with a "Follower" and have a body of his own once again.

Throughout the Kirby run, Vykin was referred to as "Vykin the Black". He was the first black super-hero to appear in a DC comic book, preceding Kirby's Black Racer by approximately 7 months. The use of the ethnic descriptor in his name, as in other Kirby characters such as the Black Racer, already seemed awkward at the time, but reflects the kind of labelling that was commonplace in the multi-ethnic New York of Kirby's 1930s childhood. As political correctness about such naming conventions took greater hold, the obvious racial descriptor was dropped when the Fourth World titles were revived in the late 1980s. When the Forever People were stranded on Adon, Mark Moonrider thought it would be advantageous to civilize the people of the planet. When Vykin used their Mother Box to do so, it overloaded and was destroyed, killing Vykin in the process, but managing to create Forevertown. When the Dark overtook and reversed the effects of the Mother Box, Vykin was brought back to life. Recently he was reunited on New Genesis with his mother, Valkyra the Commander, who rode a winged robotic horse. Later on, she sacrificed her life to save her lover Orion.

Vykin has magnetic powers which allow him to attract or repel to objects of either iron or steel. He also has an innate talent with machines and electronics.

Infinity-Man is Drax, the older brother of Uxas, who would later become Darkseid of Apokolips, and became the Infinity-Man after treachery at the hands of Uxas while attempting to harness the Omega Force for himself. No explanation was given as to why he was involved with the Forever People other than Big Bear's offhanded comment to Superman in the first issue of "we've got an arrangement with the Infinity Man".

The Super Young Team are the Fifth World incarnations of the Forever People. They are influenced by American super-heroes and Japanese pop culture, and were first mentioned in 52 #6.

The Un-People are a superhero group in the Amalgam Comics universe. They are a combination of DC Comics' Forever People and Marvel Comics' Inhumans.[2]