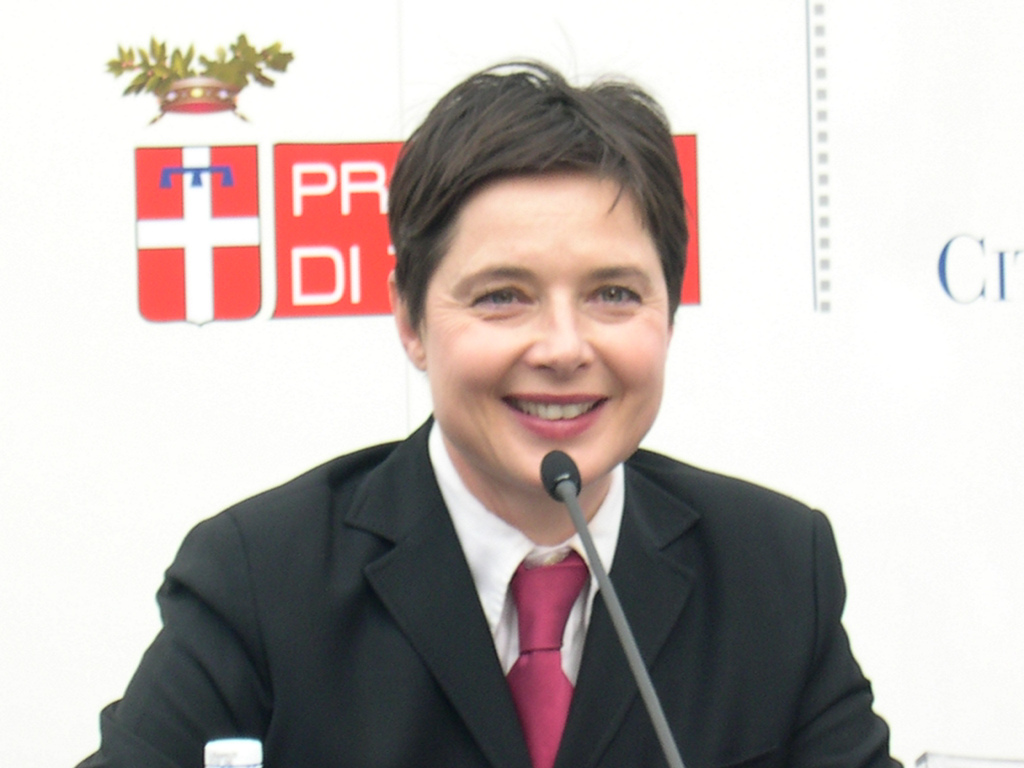 Isabella Fiorella Elettra Giovanna Rossellini (born , ) is an Italian actress, , , , and model. Rossellini is noted for her 14-year tenure as a model, and for her roles in films such as "" and "".

Rossellini is the daughter of Swedish actress and the Italian director . She has three siblings from her mother: her twin sister Isotta Ingrid Rossellini, who is an adjunct of ; a brother, Roberto Ingmar Rossellini, who works in ; and a half-sister, , who formerly worked on television and is from her mother's first marriage. She also has four other siblings from her father's two other marriages: Romano (died at age 9), Renzo, Gil, and Raffaella. [cite news |title=Like Father... |url=http://film.guardian.co.uk/venice/story/0,,1299861,00.html |work=Guardian Unlimited |publisher=Guardian News and Media Limited |date=2004-09-06 |accessdate=2007-01-29 ]

Rossellini was born and raised in , , and . At the age of 13, she was diagnosed with . In order to correct it, Isabella had to undergo an 18 month ordeal of painful stretchings, body casts, surgery on her spine using pieces of one of her shin bones (used to add supports for the individual vertebrae without risking foreign body rejection issues), and a recovery from that surgery. Consequently, she has permanent incision scars on her back and shin.

At the age of 19, she came to New York, where she attended while working as a translator, a ringmaster at circuses and a television reporter. She also appeared intermittently on 's Italian comedy show, "The Other Sunday". However, she did not decide to stay full time in New York until her marriage to (1979–1982). After her marriage to Scorsese, she married Jon Wiedemann (1983–1986), a Harvard-educated model from Texas (now a Microsoft executive), and gave birth to a daughter, Elettra. Later, she dated , , and .

At the age of 28, her modeling career began, when she was photographed by Bruce Weber for British "Vogue" and by Bill King for American "Vogue". During her career, she has also worked with many other renowned photographers, including , , , , , , , , and . Her image has appeared on such magazines as "", "", "Vanity Fair", and "". Furthermore, in March 1988, an exhibition dedicated to photographs of her, called "Portrait of a Woman", was held at the Musee d'Art Moderne in .

Rossellini's modeling career led her into the world of , when she became the exclusive spokesmodel for the international cosmetics brand in 1982, replacing in the United States and in Europe. While there, in 1990, she was involved in product development for Lancôme's fragrance Trésor. Later, in 1995, she worked with the Coty Group and developed her own brand of cosmetics, Isabella Rossellini's Manifesto. However, in 1996, after 14 years with the company, she was infamously removed as the face of Lancôme for being "too old", since she was in her 40s at the time. She is signed to .

Rossellini made her film debut with a brief appearance as a nun opposite her mother in the 1976 film "A Matter of Time". However, she did not truly begin acting until the 1979 film "Il Prato". She did not become successful with acting until after her mother's death in 1982, when she was cast in her first American film, White Nights (1985). Nonetheless, she is probably best known for her pivotal role as the nightclub singer Dorothy Vallens in 's "". Some other notable film oles include her work in "Cousins", "", "Immortal Beloved", and "Fearless".

In 2003, Rossellini had a recurring role on the television series, "Alias". In that same year, she also appeared in the Canadian film "" directed by . In 2004 she played as the High Priestess Thar in the Sci Fi Channel miniseries "Legend of Earthsea". In addition, she acted in an Off-Broadway production of "The Stendhal Syndrome". Furthermore, she became an ambassador for the Silversea Cruise Line, which has her appearing in print ads and on their website.

In 2006, Rossellini was on television for several documentaries. First, she narrated a two-hour television special on for the 's "" series, in order to show a glimpse of present-day Italy. In addition, on an episode of the series "Iconoclasts", which also featured the inventor , she told about her past and what activities she is currently involved in. [cite web |url=http://www.sundancechannel.com/iconoclasts/?section=episodes&ixContent=9747 |title=Episode 4: Isabella Rossellini + Dean Kamen |accessdate=2007-01-29 |work=Iconoclasts: change the way you see celebrity |publisher=Sundance Channel L.L.C. ] In 2007, Rossellini guest starred on two episodes of the television show "", playing 's ex-wife.

In 2008, Rossellini toured the festival circuit with a series of short films entitled , which she wrote and co-directed with . Each film is one minute long, and has Rossellini reenacting the mating rituals of various insects.

Rossellini received a 1987 for Best Female Lead for her role in "". In 1997, she received two notable award nominations. She received a Golden Globe nomination for Best Performance by an Actress in a Mini-Series or Motion Picture Made for TV for her role in "Crime of the Century" and an Emmy Award nomination for Outstanding Guest Actress in a Drama Series for her work on the television series "".

Rossellini has written three books. In 1997, her self-described fictional memoir, "Some of Me", was published. In 2002, she released her second book, "Looking at Me (on pictures and photographers)". In 2006, "In the name of the Father, the Daughter and the Holy Spirits: Remembering Roberto Rossellini" was published and was accompanied by the Guy Maddin-directed short film "My Dad Is 100 Years Old" (both the film and the book are tributes to her father). In the film, she played almost every role, including , , and her mother .