Chenopodium album is a fast-growing weedy annual plant in the genus Chenopodium.

Though cultivated in some regions, the plant is elsewhere considered a weed. Common names include lamb's quarters, goosefoot and fat-hen, though the latter two are also applied to other species of the genus Chenopodium, for which reason it is often distinguished as white goosefoot[1][2] [3] [4]. It is sometimes also called pigweed,[4] although that name is often also used for Amaranthus albus. Ambiguously, the name "fat-hen" or "fat hen" is also used for smearwort (Aristolochia rotunda).

Chenopodium album is extensively cultivated and consumed in Northern India as a food crop,[5] and in English texts it may be called by its Hindi name bathua or bathuwa (बथुआ).[6]

Its native range is obscure due to extensive cultivation,[7] but includes most of Europe,[8] from where Linnaeus described the species in 1753.[9] Plants native in eastern Asia are included under C. album, but often differ from European specimens.[10] It is widely introduced elsewhere, e.g. Africa,[11] Australasia,[12] North America,[4] and Oceania,[3] and now occurs almost everywhere in soils rich in nitrogen, especially on wasteland.

close-up of flower and flower bud

It tends to grow upright at first, reaching heights of 10–150 cm (rarely to 3 m), but typically becomes recumbent after flowering (due to the weight of the foliage and seeds) unless supported by other plants. The leaves are alternate and can be varied in appearance. The first leaves, near the base of the plant, are toothed and roughly diamond-shaped, 3–7 cm long and 3–6 cm broad. The leaves on the upper part of the flowering stems are entire and lanceolate-rhomboid, 1–5 cm long and 0.4–2 cm broad; they are waxy-coated, unwettable and mealy in appearance, with a whitish coat on the underside. The small flowers are radially symmetrical and grow in small cymes on a dense branched inflorescence 10–40 cm long.[2][3][4][10] 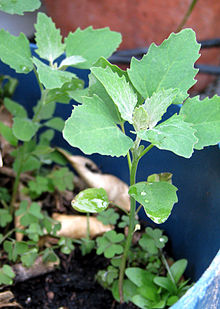 Chenopodium album has a very complex taxonomy and has been divided in numerous microspecies, subspecies and varieties, but it is difficult to differentiate between them. The following infraspecific taxa are accepted by the Flora Europaea:[8]

The species is cultivated as a grain or vegetable crop (such as in lieu of spinach) as well as animal feed in Asia[5] and Africa, in Europe and North America it is commonly regarded as a weed.[13]

It is one of the more robust and competitive weeds, capable of producing crop losses of up to 13% in corn, 25% in soybeans, and 48% in sugar beets at an average plant distribution.[citation needed] It may be controlled by dark tillage, rotary hoeing, or flaming when the plants are small. Crop rotation of small grains will suppress an infestation. It is easily controlled with a number of preemergence herbicides.[14] Its pollen can contribute to hayfever-like allergies.[citation needed]

Beneficial use in ecological pest control

Chenopodium album is vulnerable to leaf miners, making it a useful trap crop as a companion plant. Growing near other plants, it attracts leaf miners which might otherwise have attacked the crop to be protected. It is a host plant for the beet leafhopper, an insect which transmits curly top virus to beet crops. 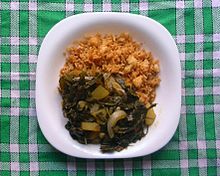 Rice and Chenopodium album leaf curry with onions and potatoes

The leaves and young shoots may be eaten as a leaf vegetable, either steamed in its entirety, or cooked like spinach, but should be eaten in moderation due to high levels of oxalic acid.[15] Each plant produces tens of thousands of black seeds. These are high in protein, vitamin A, calcium, phosphorus, and potassium. Quinoa is a closely related species which is grown specifically for its seeds.[16] It is also used as a medicinal plant in traditional African medicine.

Archaeologists analysing carbonized plant remains found in storage pits and ovens at Iron Age and Roman sites in Europe have found its seeds mixed with conventional grains and even inside the stomachs of Danish bog bodies.[17]

In India, the plant is popularly called bathua and found abundantly in the winter season[18]. The leaves and young shoots of this plant are used in dishes such as Sarson Da Saag, soups, curries and in Paratha stuffed breads, especially popular in Punjab. The seeds or grains are used in phambra or laafi, gruel type dishes in Himachal Pradesh, and in mildly alcoholic fermented beverages such as soora and ghanti.[19]

As a walking stick

The stalk hardens with age. In China, the stalk had been used as a walking stick since ancient times.[citation needed]

As some of the common names suggest, it is also used as food (both the leaves and the seeds) for chickens, hens and other poultry. However, the nitrates in the plant can be converted very efficiently to nitrites in the rumen of cattle, leading to changes in haemoglobin and reducing the ruminants' oxygen binding capacity.[citation needed]