Pennsylvania Route 171 (also designated by the Pennsylvania Department of Transportation as SR 0171) is a 40.15-mile (64.62 km) long north–south state highway located in northeast Pennsylvania. The southern terminus of the route is at U.S. Route 6 Business in Carbondale. The northern terminus is officially located at the southbound on-ramp to Interstate 81 in Great Bend; however, signage for PA 171 is present at an intersection with U.S. Route 11, 250 feet (76 m) to the west of I-81.

PA 171, at its southern end, was once part of the Providence and Carbondale Turnpike, which ran along US 6 BUS from Dickson City to Carbondale and PA 171 from Carbondale to Forest City. The turnpike, chartered in 1851, ran from Scranton until being abandoned in 1889. In 1911, after the Sproul Road Bill was signed, a large segment of PA 171 was designated as Legislative Route 10. This was its designation for several years, and in 1928, the mass amount of state highways in Pennsylvania were designated.

In the 1928 renumbering, the alignments of PA 171 were designated as Pennsylvania Route 70, Pennsylvania Route 602, and Pennsylvania Route 692, which stretched the highway from U.S. Route 6/U.S. Route 106 in Carbondale to the New York state line at Hallstead. In 1946, PA 692 and PA 602 were later removed from the state system and replaced by an extended PA 70. In 1961, PA 70 was renumbered as PA 171 to prevent duplication with Interstate 70. 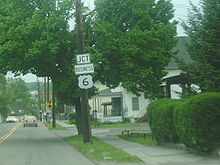 Pennsylvania Traffic Route 171 begins at an intersection with U.S. Route 6 Business in the eastern part of Carbondale. The route progresses northward, along Belmont Street, passing several homes for several blocks. At an intersection with Spencer Street, the highway leaves downtown Carbondale and enters Fell Township, a nearby community. There, PA 171 changes names to Main Street, passing more residential homes and local businesses, until entering the community of Simpson. At Reservoir Street, PA 171 turns northward and leaves Simpson. After an intersection with Owego Street, PA 171 leaves Fell Township and becomes parallel to the Owego Turnpike through a residential community surrounded by forests.[1]

After about a mile, PA 171 turns away from the residential and commercial buildings and winds through the local woodlands. This scenery continues for several miles, passing by a reservoir. After an intersection with Buffalo Road, the road turns to the northeast. After the turn, PA 171 enters the community of Richmondale. In Richmondale, the highway heads eastward,the development of the scenery around the highway once again. After leaving Richmondale, the highway enters Vandling, where the highway becomes highly developed. After an intersection with Clinton Street, Route 171 leaves Vandling and crosses into Susquehanna County, where the highway enters Forest City.[1] 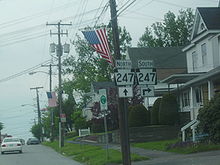 North of Forest City, PA 171 heads north for several miles through deep forests. After a while, PA 171 crosses over the Lackawanna River, which straddles the Wayne County border. The route, at that point, changes names to Stillwater Road, parallelling Old Logging Road 296 until approaching Stillwater Lake, where the logging road merges back into the highway. PA 171 parallels the shores of Stillwater Lake and passes the Stillwater Dam, maintained by the U.S. Army Corps of Engineers. While PA 171 continues to follow the lake, it enters the community of Union Dale.[1] 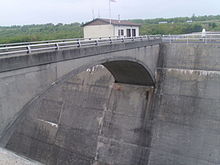 Stillwater Dam, a dam along Stillwater Lake, which is visible on PA 171

PA 171 enters Union Dale, leaving forests that it was following. The route intersects and parallels Mausoleum Road, which heads through a cemetery in southern Union Dale. After an intersection with Asley Drive, Stillwater Lake ends, and the community enters the center of Union Dale. The center consists of an intersection with Skyline Drive, and PA 171 leaves. The highway continues out of Union Dale, winding its way to the north. PA 171 continues running as Stillwater Road into the deep forests which break up soon after.[1]

A short distance later, PA 171 becomes slightly developed, entering the small community of Herrick Center. There, the highway intersects with the eastern terminus of Pennsylvania Route 374 and the western terminus of Pennsylvania Route 371, also known as the Great Bend Turnpike. The route leaves Herrick Center and heads northward through rural parts of Susquehanna County.[1]

After leaving Herrick Center and PA 371/374, PA 171 progresses through Susquehanna County, leaving Stillwater Road. The route continues through the rural parts of Susquehanna County. After a break in a patch of trees, PA 171 intersects with Township Road 592, beginning a wind along the Wayne County border. The township road parallels for sometime, and the highways eventually enters the small community of Burnwood, where the highway becomes slightly developed. North of Burnwood, the route continues northward, entering the community of East Ararat, where Pennsylvania Route 370's western terminus is located.[1]

The route passes through East Ararat, leaving soon after. After that, PA 171 begins to progress through the rural areas once again, paralleling a short distance of PA 370. After an intersection with Borden Hollow Road, the highway progresses through a deep area of forests. The route passes Dunn Pond, where it bends to the northwest, entering Ararat Township. Along this stretch, PA 171 passes to the north of the community of Ararat. The route continues for several miles, and after turning to the east, the highway enters the community of Thompson.[1]

Into the community of Thompson, PA 171 becomes known as Jackson Street and heads through a moderately developed region. The route, at an intersection with Main Street, leaves Jackson and continues northward. After the intersection with Erie Avenue, PA 171 leaves Thompson. A short distance later, the highway continues northward through deep forests and rural farms before continuing into Thompson Township. After that the road starts winding its way northward, it returns to the unpopulated area and intersects with local roads.[1]

This pattern continues for several miles, with PA 171 passing a large pond and deep forests. At the intersection with Comforts Pond Road and Bethels Hill Road, the highway becomes slightly developed. This quickly reverts back to the undeveloped rural farms, which follow PA 171 along its trip to the northwest. A short distance later, the highway becomes surrounded by forests once again, beginning to wind its way as the Belmont Turnpike. The forests quickly ends, and the surroundings become highly developed as the community enters Lanesboro.[1] 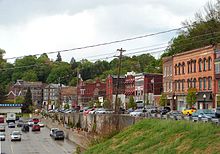 PA 171 heads through the community of Susquehanna Depot

After entering Lanesboro, PA 171 becomes highly developed and continues as Belmont Turnpike until the intersection with Main Street, where the highway turns to the southwest. The route heads along Main Street, progressing along the developed parts of the Susquehanna River, and enters the community of Susquehanna Depot. In Susquehanna Depot, PA 171 runs along East Main Street through the eastern segment of the community. Near the dead-end Jackson Street, the highway turns to the south, intersecting with Pennsylvania Route 92. From there, the two highways are concurrent.[1] 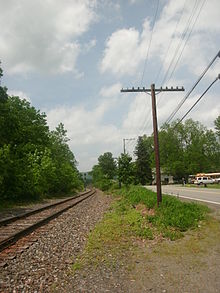 After leaving Susquehanna Depot and Oakland Township, PA 171 heads on a westward progression along the Susquehanna River. To the south of the highway is the river, to the north of the highway is residential homes and deep forests behind those. After the intersection with Towner Road, PA 171 enters the small community of Hickory Grove, where the route and river makes a curve to the southwest, still paralleling each other. PA 171 quickly leaves Hickory Grove and enters another set of deep forests which separate the highway and the river.[1]

The highway continues on its southwest progression, with the trees surrounding dissipating. After that, both the river and the highway pass to the north of Island Plain. There, the routes curve to the northwest once again, becoming more developed and now following a railroad line in the area. The route makes a curve to the west, progressing through a short development of residential homes. After that, the highway enters Great Bend and heads to the southwest. The designation terminates at Interchange 230 along Interstate 81 in downtown Great Bend, but signage exists at the intersection with U.S. Route 11 in Great Bend.[1]

A short segment of PA 171, from Carbondale to the community of Forest City, was part of the Providence and Carbondale Turnpike, which went from the city of Scranton, Pennsylvania, following much of U.S. Route 6 and U.S. Route 106 (current day U.S. Route 6 Business) through many of the communities in the area: Dickson City, Jermyn, and Carbondale, before turning onto current day PA 171. There, the turnpike followed the alignment through Carbondale, Fell Township, Vandling and into Forest City, where it ended, 20 miles (32 km) from Scranton. This tolled turnpike provided the main highway through many of the communities, including the towns along PA 171, until on December 7, 1889, when local citizens tore down the abandoned tollbooths in Blakely.[2] Originally, the turnpike was chartered by the commonwealth of Pennsylvania in 1851, and remained strong until 1889, the year the tollbooths were torn down. After that the turnpike was abandoned, with control of the turnpike's alignment turned over Lackawanna County for future maintenance.[3]

In 1897, the portion of PA 171 along Main Street in Susquehanna Depot was paved. The project to pave the main highway cost $10,000 (1897 USD) with funds split equally between the borough of Susquehanna Depot, the local businesses, and the nearby Erie Railroad.[4]

The alignment of PA 70 was under construction in 1929 from the Thompson Township line to Lanesboro.[8] It was completed the next year, when the Pennsylvania Department of Highways paved the highway from Herrick Center to Thompson and Stack Road to the Harmony Township line.[9] These three routes remained intact (in terms of alignment) for eighteen years, until 1946, when PA 692 and PA 602 were removed from the state highway system in favor of extending PA 70 to the north to Hallstead.[10] The route, PA 70, remained intact for another seventeen years, when in 1961, Interstate 70 was already commissioned, and PA 70 was decommissioned. The PA 70 designation was renumbered to PA 171 to prevent duplication.[11]