A bottle of ketchup made by H. J. Heinz Company, the largest distributor of ketchup in the world

Ketchup (sometimes catsup in American English and Canadian English or tomato sauce in Commonwealth English; see Etymology or refer to red sauce in Welsh English, Scottish English, and English of other parts of England, such as the Black Country) is a sweet-and-tangy condiment typically made from tomatoes, vinegar, sugar or high-fructose corn syrup and an assortment of vegetable seasonings and spices such as onions, allspice, cloves, cinnamon, garlic, and celery.[1] Ketchup is often used with french fries (chips in the UK), hamburgers, sandwiches and grilled or fried meat. In Australia and New Zealand, where it is known as tomato sauce, it is a typical accompaniment for meat pies. Ketchup is sometimes used as a basis or ingredient for other sauces and dressings.

In the 1690s the Chinese mixed together a concoction of pickled fish and spices and called it kôe-chiap or kê-chiap (鮭汁) meaning the brine of pickled fish (鮭, carp; 汁, juice) or shellfish.[2]

By the early 18th century, the table sauce had made it to the Malay states (present day Malaysia and Singapore), where it was discovered by British explorers, and by 1740, it had become a British staple.[citation needed] The Malay word for the sauce was kĕchap. That word evolved into the English word "ketchup".[3]

Many variations of ketchup were created, but the tomato-based version did not appear until about a century after other types. By 1801, a recipe for tomato ketchup was created by Sandy Addison and was later printed in an American cookbook, the Sugar House Book.[4]

The salt in this recipe, which served as a preservative, yields an extremely salty taste. This recipe is important because tomato was not widely accepted by people in North America in the early 1800s. Many people believed, incorrectly, tomatoes were poisonous.

As the century progressed, tomato ketchup began its ascent in popularity in the United States. Ketchup was popular long before fresh tomatoes were.[6] Many Americans continued to question whether it was safe to eat raw tomatoes. However, they were much less hesitant to eat tomatoes as part of a highly processed product that had been cooked and infused with vinegar and spices.[6]

The Webster's Dictionary of 1913 defined ‘catchup’ as: “table sauce made from mushrooms, tomatoes, walnuts, etc. [Also written as ketchup].”

Modern ketchup emerged in the early years of the 20th century, out of a debate over the use of sodium benzoate as a preservative in condiments. Harvey W. Wiley, the "father" of the Food and Drug Administration in the U.S., challenged the safety of benzoate which was banned in the 1906 Pure Food and Drug Act. In response, entrepreneurs including Henry J. Heinz, pursued an alternative recipe that eliminated the need for that preservative.[1]

Prior to Heinz (and his fellow innovators), commercial tomato ketchups of that time were watery and thin, in part due to the use of unripe tomatoes, which were low in pectin. They had less vinegar than modern ketchups; by pickling ripe tomatoes, the need for benzoate was eliminated without spoilage or degradation in flavor. But the changes driven by the desire to eliminate benzoate also produced changes that some experts (such as Andrew F. Smith[8]) believe were key to the establishment of tomato ketchup as the dominant American condiment.

In fast food outlets, ketchup is often dispensed in small packets that hold ketchup inside. Diners tear the side or top and squeeze the ketchup out of the ketchup packets. In 2010, Heinz began offering an alternate squeeze and dip cup intended to offer a cleaner method of dispensing the product.[9]

Previously fast food outlets dispensed ketchup from pumps into paper cups. This method has made a resurgence in the first decade of the 21st century with cost and environmental concerns increasing of individual packets.

In October 2000, Heinz introduced colored ketchup products called EZ Squirt, which eventually included green, purple, pink, orange, teal, and blue.[10] These products were made by adding food coloring to the traditional ketchup. As of January 2006[update] these products have been discontinued.[11]

Ketchup is the dominant term in American English and Canadian English; tomato sauce is not a synonym for ketchup in these, where it refers to pasta sauce. Commonwealth English (e.g., in Australia, India, New Zealand, and South Africa) largely favours the term tomato sauce instead of ketchup. In British English, the two are interchangeable.

The etymology of the word ketchup is uncertain, with multiple competing theories.[12]

The Chinese characters representing the original words-phrase ketchup are disputed. The two primary theories as to the word's original Chinese orthography either alludes to a fish sauce or to a pickled tomato sauce.

The China theory is that the word derives from one of two words from the Fujian region of coastal southern China: "kôe-chiap" (in the Xiamen accent) or "kê-chiap" (in the Zhangzhou accent). Both of these words (鮭汁, kôe-chiap and kê-chiap) come from the Amoy dialect of China, where it meant the brine of pickled fish (鮭, carp; 汁, juice) or shellfish.[2] There are citations of "koe-chiap" in the Dictionary of the Vernacular or Spoken Language of the Amoy (London; Trudner) from 1873, defined as "brine of pickled fish or shell-fish."

An alternative Chinese theory expounded in certain dictionaries[13] states that the word "ketchup" derives from a Chinese word composed of two characters (茄汁), which means "tomato sauce". The first character (茄), meaning "eggplant", is also the root for the word "tomato" (番茄(lit. "southern foreigner's eggplant") in Mandarin and Cantonese or 紅茄 (lit. "red eggplant") in Taiwanese.

Some have stated (without authority) that at the relevant time tomatoes were unknown in China; however, the first recorded mention of "tomato" in China is Zhao Han's (赵函) "Zhi Pin"("植品") (1617) which states that the tomato was introduced into China by missionaries in the late 16th century. The second character (汁) means "juice" or "sauce". Pronunciations of this word vary by region, but their similarities to the English "ketchup" can be noticed.

Ketchup may have[13][14] entered the English language from the Malay word kicap (pron. "kichap", also spelled kecap, ketjap), originally meaning "fish sauce",[13] which itself may be[13] a loan from Chinese terms above.

In Indonesian cuisine, which is similar to Malay, the term kecap or ketjap refers to savory sauces. Two main types are well known in their cuisine: kecap asin which translates to 'salty kecap' in Bahasa Indonesia (a salty soy sauce) and kecap manis or literally 'sweet kecap' in Bahasa Indonesia (a sweet soy sauce that is a mixture of soy sauce with brown sugar, molasses, garlic, ginger, anise, coriander and a bay leaf reduced over medium heat until rather syrupy). A third type, kecap ikan, meaning "fish kecap" is fish sauce similar to the Thai "Nam Pla" or the Philippine "Patis." It is not, however, soy-based.

American anthropologist E.N. Anderson claimed that ketchup is a cognate of the French escaveche, meaning "food in sauce".[12] The word also exists in Spanish and Portuguese forms as escabeche, "a sauce for pickling", which culinary historian Karen Hess traced back to Arabic iskebey, or "pickling with vinegar".[12] The term was anglicized to caveach, a word first attested in the late 17th century, at the same time as ketchup.[12]

The word entered the English language in Britain during the late 17th century, appearing in print as catchup (1690) and later as ketchup (1711). The following is a list of early quotations collected by the Oxford English Dictionary. 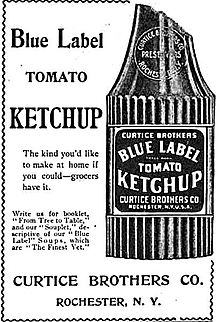 The spelling catsup seems to have appeared first from the pen of Jonathan Swift, in 1730.

Some ketchup in the U.S. is labeled "Fancy". This is a USDA grade, relating to specific gravity. Fancy ketchup has a higher tomato solid concentration than other USDA grades.

The following table compares the nutritional value of ketchup with raw ripe tomatoes and salsa, based on information from the USDA Food Nutrient Database.[15]

Ketchup has health benefits which are offset by the salt and sugar content.[16] Ketchup is a source of lycopene, an antioxidant which may help prevent some forms of cancer. This is particularly true of the organic brands of ketchup, which have three times as much lycopene.[17] Ketchup, much like marinara sauce and other cooked tomato foods, yields higher levels of lycopene per serving because cooking makes lycopene in tomatoes more bio-available.

In May 2010, Hunt's stopped using high fructose corn syrup in its ketchup products in direct response to consumer demand. 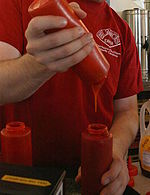 Tomato ketchup is a pseudoplastic—or "shear thinning" substance—, which can make it difficult to pour from a glass bottle. Often, the neck of the bottle will appear to be blocked. A common method to getting ketchup out of the bottle involves inverting the bottle and shaking it or hitting the bottom with the heel of the hand, which causes the ketchup to flow rapidly. A technique known widely among caterers[citation needed] involves inverting the bottle and forcefully tapping its upper neck with two fingers (index and middle finger together). Specifically, with the Heinz ketchup product, one taps the 57 circle on the neck. This helps the ketchup flow by applying the correct shearing force.[18] These techniques work because of how pseudoplastic fluids behave: their viscosity (resistance to flow) decreases with increasing shear rate. The faster the ketchup is sheared (by shaking or tapping the bottle), the more fluid it becomes. After the shear is removed the ketchup thickens to its original viscosity.

Main article: Ketchup as a vegetable

In 1981, the United States Congress under the Reagan administration ordered the United States Department of Agriculture to issue new standards for federally financed school lunch programs, which would enable schools to economize; one of the USDA's proposals was to classify ketchup as a vegetable. The suggestion was widely ridiculed and the proposal was dropped.[19]