The film was the second film released in Paramount's new wide-screen system, VistaVision, in color by Technicolor and Perspecta directional sound. It would also be Stewart and Mann's eighth and final collaboration and the third of three movies that paired Jimmy Stewart and June Allyson, the others being The Stratton Story and The Glenn Miller Story.

James Stewart is a United States Air Force Reserve officer recalled to active duty to fly B-36 and B-47 nuclear bombers for the Strategic Air Command. Robert "Dutch" Holland, is a highly-paid, star professional baseball player with the St. Louis Cardinals.[N 1] During spring training in St. Petersburg, Florida, he is recalled to active duty for 21 months. At first, Dutch is a fish out of water, trying to perform duties in a service that has technologically left him far behind since the end of his World War II service as a B-29 pilot. When he reports for duty at Carswell AFB, a bomber base in Ft. Worth, Texas to qualify in the Convair B-36, he has to wear civilian garb, because his old uniforms are those of the old U.S. Army Air Forces, much to the displeasure of the irascible General Hawkes, the commander of SAC, played by Frank Lovejoy. The General Hawkes character is patterned after the actual commander of SAC at the time, General Curtis LeMay.

Dutch is given a staff job with the bombardment wing at Carswell that involves a lot of flying. He soon has a B-36 crew of his own, and he becomes enamored with both flying and the role of SAC in deterring war. He is joined by his wife Sally (June Allyson), who had not bargained on being an Air Force wife, and who struggles with his repeated absences and the dangers of flying. Even so, Sally tells Dutch that she is happy as long as they can be together, no matter what he decides to do with his life. Dutch is injured on duty when he is forced to crash land his B-36 bomber near Thule Air Base, Greenland. Nevertheless, he becomes a favorite of General Hawkes and is rewarded with a new assignment flying the new Boeing B-47 Stratojet at MacDill AFB in Tampa, across the bay from St. Petersburg where his old baseball team continues to conduct its spring training. Promoted to full colonel and made deputy commander of his B-47 wing, Dutch decides, to Sally's displeasure, to remain in the Air Force, rather than return to baseball at the end of his active duty obligation.

On a nonstop B-47 flight from MacDill to Kadena Air Base in Okinawa, an arm injury from the earlier B-36 crash proves to be worse than he thought, and he is barely able to land his jet, which is low on fuel due to unexpected winds and storms. This injury not only bars him from further flying (he leaves the Air Force shortly after the incident), but also appears to threaten his baseball career, although General Hawkes suggests he would make an excellent team manager.

In real life, Stewart had been a B-17 instructor pilot, a B-24 squadron commander, and a bomb group operations officer, completing 20 combat missions during World War II. At the time of filming, Stewart, much like the character he portrays, was also a colonel in the Air Force Reserve; he was later promoted to brigadier general. Thus, Stewart's character was not too far from a life he could have chosen.

Stewart's military service and lifelong interest in aviation greatly influenced the making of the film. He pushed for an authentic but sympathetic portrayal of the Strategic Air Command, which led Paramount to put together a strong cast of Hollywood veterans and production people including June Allyson, Frank Lovejoy, director Anthony Mann, and the top stunt pilot of the day, Paul Mantz. The film accurately portrays (from the perspective of the 1951 starting point of the script) the duties and responsibilities of an Air Force strategic bomber pilot, and the demands such service places on family life.[2]

The film includes some of the most dramatic aerial photography ever filmed, for which it was awarded a special citation by the American National Board of Review. It is also the only motion picture to highlight the Convair B-36 Pecemeaker (depicted in the movie poster), the largest mass-produced piston-powered aircraft ever built, and the first delivery method for the hydrogen bomb. The B-36 was then near the end of its service life, about to be replaced by the B-47 and ultimately by the Boeing B-52 Stratofortress. The aerial footage was accompanied by a dramatic and soaring musical score composed by Victor Young.

Stewart's character is based on the real-life military career and an actual mission flown by Brigadier General Clifford Schoeffler, who crashed during an Arctic B-36 mission and survived. Brigadier General Schoeffler was on site at Carswell Air Force Base during the filming of Strategic Air Command for consultation.[3]

Some commentators have speculated that the plot was inspired by Boston Red Sox legend Ted Williams, a World War II veteran, who was recalled for Korean War service as a Marine Corps aviator, at the height of his baseball career.[4]

The U.S. Air Force was fully integrated by 1955 and the Women in the Air Force (WAFs) had been established as part of the regular Air Force since 1948.[5][6] 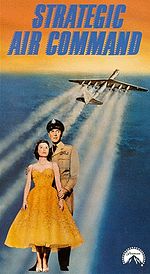 The Storz Mansion in Omaha, Nebraska, was the scene of opulent parties celebrating the movie. The movie premier was held in Omaha, the home of Offutt AFB and SAC Headquarters, and the premier party was held at the Mansion with guests including Stewart and June Allyson, as well as the Strategic Air Command commander, General Curtis LeMay.[7]

Shot in the new VistaVision process, the film was the sixth highest grossing film of 1955.[8] Critics were lukewarm about the performances of all except Stewart, who was called "capable," "charming" and "competent."[9] Public reaction centered on the spectacular aerial footage, so that the B-36 and B-47 aircraft were arguably the real "stars" of the film and the film's release led to a 25% increase in Air Force enlistments.[10]

From today's perspective, the film's appeal lies in its homage to the personnel of the Strategic Air Command, whose competence in and dedication to their appointed task, strategic bombing. This contrasts starkly with the comedy Dr. Strangelove or: How I Learned to Stop Worrying and Love the Bomb, released in 1964. Strategic Air Command was more immediately followed by two films also supportive of the SAC mission, Bombers B-52 in 1957 and A Gathering of Eagles in 1963. A more somber approach to the potential of nuclear mishaps for SAC is provided in the movie: Fail-Safe, also released in 1964, which describes a fictional Cold War nuclear crisis, and the US President's attempt to end it.

The B-47 cockpit used in the film is now on display at the March Field Air Museum at March Air Reserve Base (former March AFB) in Riverside, California.[11]