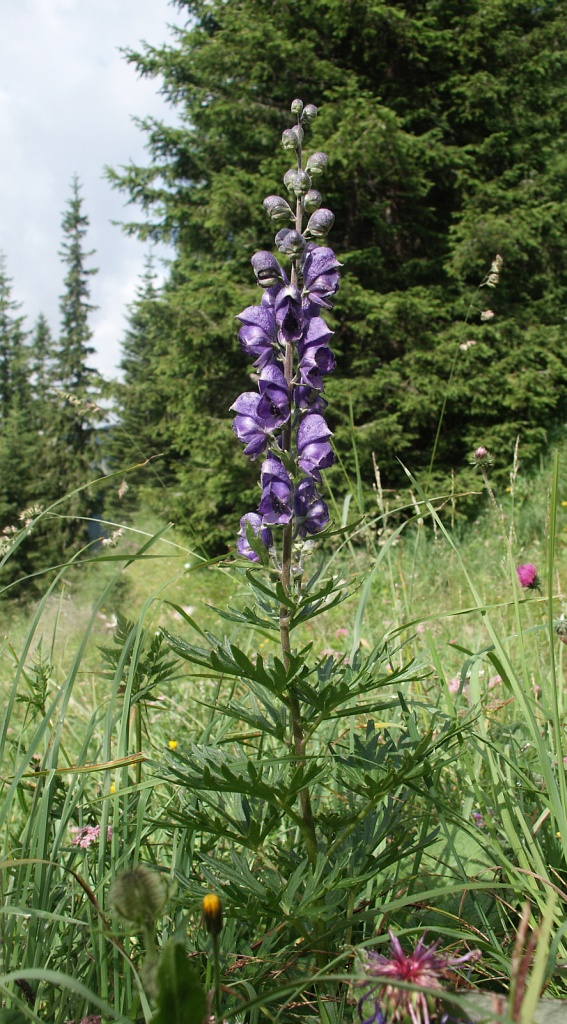 It is a growing to 1 m tall, with hairless stems and leaves. The leaves are rounded, 5-10 cm diameter, palmately divided into five to seven deeply lobed segments. The s are dark purple to bluish-purple, narrow oblong helmet-shaped, 1-2 cm tall.

Plants native to Asia and North America formerly listed as "A. napellus" are now regarded as separate species.

Plants are grown in gardens in temperate zones for their spike-like inflorescences that are showy in early-mid summer and their attractive foliage. There are white and rose colored forms in cultivation too.

"Aconitum nepellus" is grown in gardens for its attractive spike like inflorescences and showy blue flowers. [Datta, Subhash Chandra. 1988. "Systematic botany." New Delhi: Wiley Eastern Ltd.] It is a cut flower used for fresh cutting material and sometimes used as dried material. The species has a low natural propagation rate under cultivation and is propagated by or by removing offsets which are generated each year from the rootstock's and the use of protocols have been studied. [ A. A. Watad, M. Kochba, A. Nissim and V. Gaba "Improvement of Aconitum napellus micropropagation by liquid culture on floating membrane rafts"Journal Plant Cell ReportsPublisher Springer Berlin / HeidelbergISSN 0721-7714 (Print) 1432-203X (Online)Issue Volume 14, Number 6 / March, 1995DOI 10.1007/BF00238594Pages 345-348] This species has been crossed with other Aconitums to produce attractive hybrids for garden use, including "Aconitum x cammarum" [Armitage, A. M. 2000. "Armitage's garden perennials a color encyclopedia". Portland, Or: Timber Press. Pages 19-20.] Like other species in the genus, "A. napellus" contains several ous compounds, including enough poison that it was used on spears and arrows for hunting and battle in ancient times. [J Ethnopharmacol. 1981 Nov;4(3):247-336. "Arrow poisons in China. Part II. Aconitum--botany, chemistry, and pharmacology".Bisset NG.] "A. napellus" has a long history of use as a poison, with cases going back thousands of years. [Toxicology in the Old Testament: Did the High Priest Alcimus Die of Acute Aconitine Poisoning?Authors: Moog F.P.1; Karenberg A.1Source: Adverse Drug Reactions & Toxicological Reviews (now known as Toxicological Reviews), Volume 21, Number 3, 2002 , pp. 151-156(6) Publisher: Adis International] During the ancient Roman period of European history the plant was often used to eliminate criminals and enemies, and by the end of the period it was banned and any one growing "A. napellus" could have been legally sentenced to death. [Roberts, M. F., and Michael Wink. 1998. "Alkaloids biochemistry, ecology, and medicinal applications". New York: Plenum Press. Page 18.] Aconites have been used more recently in murder plots; they contain the Chemical alkaloids , , and , which are highly toxic. [ [http://md1.csa.com/partners/viewrecord.php?requester=gs&collection=ENV&recid=4297677&q=Aconitine+murder+&uid=792020396&setcookie=yes CSA ] ]