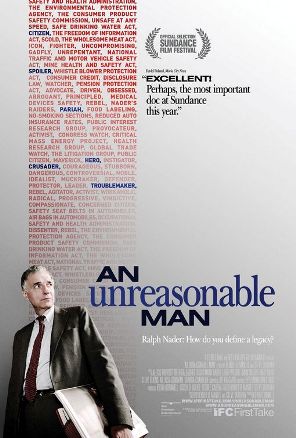 "An Unreasonable Man" is a 2007 that traces the life and career of political activist , the founder of modern . The film examines Nader's advocacy for features, such as federally mandated and , as well as his rise to national prominence following an lawsuit against . It also examines the formation of independent advocacy groups (termed "") during the 1970s; organizations which carried out independent research on various federal agencies, such as the and the . Over the next thirty years, the film argues, Nader "built a legislative record that would be the envy of any modern president."

The second half of the film traces Nader's shift to a grassroots form of organizing focused on citizen power, including his eventual disillusionment with the following the rise of . In assessing Nader's effect as a third party candidate, the film examines censorship in the presidential debates as well as Nader's disputed role as a "spoiler" in the .

The film makes use of interviews with current and former members of Nader's Raiders, including and , as well as politicians and political analysts such as , , and . It takes its name from the quote, "The reasonable man adapts himself to the world; the unreasonable one persists in trying to adapt the world to himself. Therefore all progress depends on the unreasonable man."