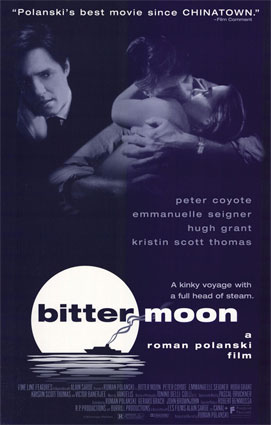 A very prim and proper British couple, Fiona and Nigel, are on a cruise ship to , en route to . They encounter another couple on the ship, the seductive French woman Mimi and her American husband Oscar, who is a failed writer.

The story unfolds as Oscar invites Nigel to his cabin where he recalls in a series of episodes, how he and Mimi met on a bus in and fell in love, and then how their relationship went horribly wrong.

During a series of flashbacks, Oscar recounts how his and Mimi's love takes a darker turn. They explore , , , and . Slowly their self-absorbed relationship decays and Oscar tries to break-up with Mimi. She begs him to let her live with him under any conditions and he sees the opportunity to explore sadistic fantasies at her expense.

Oscar increasingly subjects Mimi to public humiliation, until she becomes pregnant. Oscar persuades her that he would be a terrible father and that she should have an abortion.Whilst recovering from the ordeal Oscar visits her and is shocked by her condition. He almost relents his attempts to drive her away but instead promises her a holiday somewhere exotic. We next see them together on the plane and just before it takes off, Oscar fakes illness and abandons the flight with her on board.

Oscar's tale continues with him immersing himself in a world of parties and one-night stands for the next two years. The hedonistic lifestyle ends when he drunkenly steps in front of a vehicle. A much more confident-looking Mimi visits him in hospital, where he is recovering from minor injuries and a broken leg. By manipulating Oscar's traction device, Mimi cripples Oscar in an extremely cruel display of violence. We later learn that he is now paraplegic.

Mimi informs Oscar that she will look after him and moves back into the apartment to be his full-time caretaker. She revels in dominating and humiliating him, to the extent that she seduces friends in front of him. Oscar is filled with self-loathing and seems to believe that he deserves this treatment.

The flashbacks end and Nigel is both shocked and appalled. He is intrigued by Mimi and encouraged by Oscar to have an affair with her. He finds himself attracted to Mimi but lacks confidence to approach her directly. His wife, Fiona, repeatedly warns him not to stray too far as anything he can do, she can do better.

Later during the New Year's Eve party, Nigel attempts to dance with Mimi but she seems only partially interested. Oscar tells him to try harder or risk losing her to another. As Nigel attempts again to woo Mimi, she informs him that Fiona has arrived and that she is watching them.

Nigel hurriedly greets Fiona, and learns that Oscar had had her reminded to come to the party. Fiona is not impressed with Nigel's behaviour but is with Mimi. The two ladies take to the dance floor and are encouraged by the crowd to dance passionately and embrace. Together the ladies leave and Nigel looks crestfallen. Oscar's attempts to philosophize only serve to enrage Nigel. He goes outside and screams his frustration into the wind and waves.

Later, we see Nigel awake from a drunken stupor and go looking for Fiona. He finds her in Mimi's cabin where Oscar has clearly watched the ladies exhaust themselves sexually. In a moment of rage, Nigel grabs Oscar's throat only to have a gun pointed at him. Oscar is clearly highly distressed and shoots the sleeping Mimi several times as Fiona cowers beside her, before blowing the back of his head off.

Finally we see the bodies being stretchered off the ship and minor character interactions. Fiona and Nigel are left embracing one another and sobbing as the credits start to roll.

"Polanski directs it without compromise or apology, and it's a funny thing how critics may condescend to it, but while they're watching it you could hear a pin drop." Chicago Sun Times [Roger Ebert on [http://rogerebert.suntimes.com/apps/pbcs.dll/article?AID=/19940408/REVIEWS/404080301/1023 rogerebert.com] ]