A coil is a series of loops. A coiled coil is a structure in which the coil itself is in turn also looping.

An electromagnetic coil (or simply a "coil") is formed when a conductor (usually an insulated solid copper wire) is wound around a core or form to create an inductor or electromagnet. One loop of wire is usually referred to as a turn, and a coil consists of one or more turns. For use in an electronic circuit, electrical connection terminals called taps are often connected to a coil. Coils are often coated with varnish and/or wrapped with insulating tape to provide additional insulation and secure them in place. A completed coil assembly with taps is often called a winding. A transformer is an electromagnetic device that has a primary winding and a secondary winding that transfers energy from one electrical circuit to another by inductive coupling without moving parts. The term tickler coil usually refers to a third coil placed in relation to a primary coil and secondary coil. A coil tap is a wiring feature found on some electrical transformers, inductors and coil pickups, all of which are sets of wire coils. The coil tap(s) are points in a wire coil where a conductive patch has been exposed (usually on a loop of wire that extends out of the main coil body). As self induction is larger for larger coil diameter the current in a thick wire tries to flow on the inside. The ideal use of copper is achieved by foils. Sometimes this means that a spiral is a better alternative. Multilayer coils have the problem of interlayer capacitance, so when multiple layers are needed the shape needs to be radically changed to a short coil with many layers so that the voltage between consecutive layers is smaller (making them more spiral like).

where Henry [µH] (microhenries) are units of inductance, R is the coil radius (measured in inches to the center of the conductor), N is the number of turns, and L is the length of the coil in inches. In case you need to input coil dimensions in mm, you can multiply the formula result with 1/25.4. The online Coil Inductance Calculator calculates the inductance of any coil using this formula. Higher accuracy estimates of coil inductance require calculations of considerably greater complexity.

Note that if the coil has a ferrite core, or one made of another metallic material, its inductance cannot be calculated with this formula. 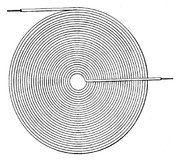 Some common electromagnetic coils include:

Other applications of coils exist in the field of electromagnetic devices. A coilgun is a type of cannon that uses a series of electromagnetic coils to accelerate a magnetic shell to very high velocities. The filament of an incandescent light bulb has usually the shape of a coiled coil, in order to fit the long filament in a small space.

A chemistry coil is a tube of spiral form, used commonly to cool originating steam of the distillation and thus to condense them in liquid form. In the study of how molecules interact with each other, there are a few specific references to organic coils. During self-assembly, organic elements organize to form this structural pattern. Molecular self-assembly assembles the molecules, without guidance or management from an outside source, into these shapes.

Examples of these structural patterns include:

As an acronym, COIL denotes the Chemical Oxygen Iodine Laser.

In medicine, the Guglielmi Detachable Coil is a platinum coil commonly used in intracranial non-invasive surgery, for the occlusion of brain aneurysms.

Coiling is an old and wide spread technique to form relatively tall and thin-walled vessels with good control over shape and wall thickness.

In sailing terms, a rope is said to be "cheesed down" when it needs to be stowed away neatly.[1]