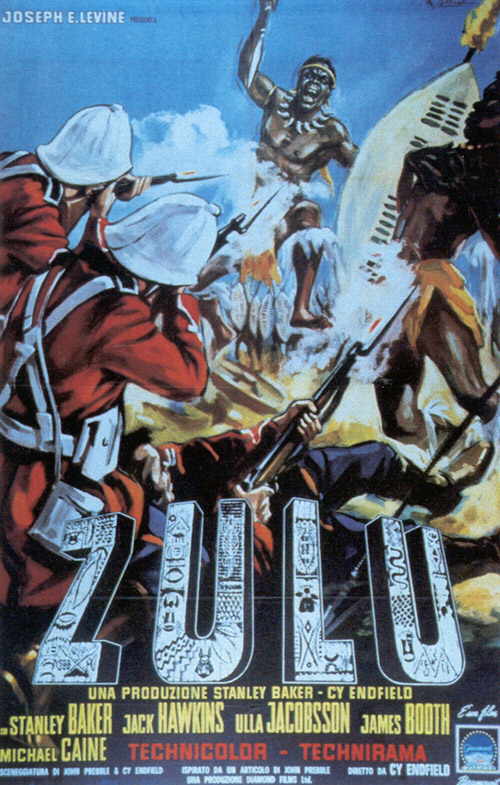 "Zulu" is a fy|1964 historical depicting the between the and the s in January 1879, during the . The film was directed by ed American screenwriter

The film was compared by Baker to a , with the traditional roles of the and Native Americans taken by the British and the Zulus respectively. The film acknowledges the Zulus' bravery. Director Endfield showed a Western to Zulu extras to demonstrate the concept of film acting and how he wanted the warriors to conduct themselves.

Most of the characters in the film were based on actual participants of the battle, but their behaviour is mostly fictional &ndash; something that has provoked disapproval: in an interview on the DVD, the descendants of Private Hook object to his negative portrayal in the film (he is depicted as a thief and malingerer, though his character acts bravely near the end of the movie during some desperate fighting). Indeed, Hook's elderly daughters walked out of the film's 1964 London premiere, angry at the way their father had been depicted.

A , "", about the which immediately preceded the Battle of Rorke's Drift, was released in fy|1979. It was also written by Cy Endfield, and starred and .

In , a from British to the government in , narrated by , details the crushing defeat of a British force at the hands of the s at the . The first scene shows a grassy landscape with many dead British soldiers, while victorious Zulus gather their weapons.

A mass Zulu marriage ceremony witnessed by Otto Witt (), his daughter () and Zulu King (Chief ) is interrupted by a messenger who informs Cetshwayo of the great victory earlier in the day.

The movie then shifts to the missionary station of in Natal, being used by the British army as a supply dump and hospital for their now-defeated invasion force across the border in Zululand. The commanders of the depot, Lieutenants John Chard () and Gonville Bromhead (), receive news of Isandhlwana and that a large enemy force is advancing their way. Realising that they cannot outrun the Zulu army, especially with wagonloads of wounded soldiers, the commanders decide to the station, using wagons, sacks of , and crates of ship's biscuit, and await the assault. As the Zulu "s" approach, soldiers of the and British settlers flee the site. Zulu s open fire on the station from a neighbouring hill. Over the next few hours, the main Zulu body launches wave after wave of attacks, which are repulsed, though the attackers succeed in setting fire to the hospital, leading to intense fighting between British patients and Zulu warriors as the former try to escape the flames. Attacks continue into the night, finally forcing the British to withdraw into a tiny built from supply crates and mealie bags.

The next morning, at dawn, the Zulus withdraw several hundred yards and begin singing a war chant; the British respond by singing "". After a last failed assault, in which the defenders form into three ranks and pour volley after volley into the Zulus, they withdraw after sustaining heavy casualties and sing a song to honour the bravery of the British defenders, and leave. The film ends with a narration by , listing defenders who received the -- including Private Hook. Eleven were awarded for the actual fighting at Rorke's Drift, the most ever for a regiment in a single battle in .

* as . An officer of the , Chard assumes command of the mission station and organises its fortification and defence.
* as Lieutenant . A conceited and somewhat arrogant man, Bromhead, a young infantry officer, is first seen hunting s on the . He initially clashes with Lt. Chard, but soon accepts Chard's leadership. Bromhead initially appears panicked, criticising his African troops and arguing with Chard, but displays personal bravery during the battle and eventually realizes how much he and the men need Chard.
* as Otto Witt. A Swedish based at Rorke's Drift, Witt is first seen with his adult daughter Margaret at King Cetshwayo's in the capital, . When news of the Zulu victory at Isandhlwana reaches Ulundi, the Witts flee in their carriage to Rorke's Drift. When Lt. Chard denies him permission to evacuate the wounded on wagons, Witt breaks down and incites the British garrison's African allies to flee. When his interference becomes too much of a hazard, Chard has Witt and his hysterical daughter bundled onto their carriage and driven away from the battlefield.
* as Private Henry Hook. Described as"a thief, a coward, and an insubordinate barrack-room lawyer", Hook is a roguish character feigning illness in order to avoid work, where he is constantly tormented by his ill, delirious sergeant. Despite his apparent cowardice, Hook is rebellious enough to criticise the 's : "Did I ever see a walk down The City Road? No. So what am I doing here?" and insolent enough to insult and manhandle his ailing, intermittently-conscious sergeant. During the battle for the hospital, Hook displays great courage in trying to rescue that same sergeant, and although he is unable to save him, Hook earns his sergeant's respect. His friends nickname him "Hookie."
* as . A loud, burly sergeant, Bourne is a key character in the fortification of the station, using his immense strength to assist with the fortifications, and displays immense personal courage during the battle. He is very by-the-book. He frequently says "All right, nobody told you to stop working!" whenever the soldiers are idle. (Green and Caine appeared in a number of films and TV episodes together. In this film, Green was Caine's subordinate, but in "The Ipcress File" and "", he was Caine's superior.)
* as William Allen, portrayed as a model soldier. He is one of the defenders in the battle of the hospital.
* as Private Owen. A charismatic Welshman, Owen is immensely fond of singing (a baritone himself) and is very popular in the ranks. He is a great friend of Private Thomas, whom he affectionately calls Tommy. Owen leads the men to sing "Men of Harlech", the song originally featured in his choir.
* as Private John Thomas. John misses his home in Meirioneth, notably his lake and his calf.
*Patrick Magee as - , the overworked doctor. Reynolds provides vital medical aid to wounded soldiers during the battle, despite a total lack of s or s, using the church's as an operating table.
*Gert Van den Bergh as Lieutenant Josef Adendorff. An officer serving with the and a survivor of the battle at Isandhlwana, Adendorff provides valuable advice to Chard on Zulu tactics and optimum defence tactics. Surprisingly, Adendorff vigorously defends the bravery and utility of the army's black soldiers after Bromhead's criticisms. Adendorff remains at Rorke's Drift throughout the battle, fighting alongside the British.
*Dickie Owen as Corporal Schiess. An corporal in the

"Zulu" was made at , , , England, UK and on location in South Africa, at , , and the national parks of KwaZulu-Natal. The cinematographic process was used.

Michael Caine, who at this time in his career was primarily playing bit parts, was originally up for the role of Private Henry Hook, which went to James Booth. According to Caine, he was extremely nervous during his screen test for the part of Bromhead, and director told him that it was the worst screen test he had ever seen, but they were casting Caine in the part anyway because the production was leaving for South Africa shortly and they hadn't found anyone else for the role.

Caine's performance in "Zulu" won him praise from reviewers, and his next film role would be as the star of "" in which he was reunited with .

Although writer Cy Endfield consulted with a Zulu tribal historian for information from Zulu oral tradition about the attack, a number of historical inaccuracies in the film have been noted.

"Zulu" received no nominations, but Ernest Archer was nominated for a for "Best Colour Art Direction" on the film. In fy|2004, however, the magazine "" named "Zulu" the 37th greatest British movie of all time, and it was voted eighth in the British television programme "The 100 Greatest War Films". [ [http://www.channel4.com/film/newsfeatures/microsites/W/greatest_warfilms/results/100-96.html 100 Greatest War Films] ]

In the US, "Zulu" officially lapsed into the , meaning there have been several issues of the film on home video/LaserDisc/DVD in North America — most notably an LD release by the which retains the original stereophonic soundtrack and taken from a 70mm print. An official DVD release (with a mono soundtrack as the original stereo tracks were not available) was later issued by Embassy's successor-in-interest, (with handling video distribution). StudioCanal (the current owner of the Embassy theatrical library) had acquired US control of the film in 2000 after its copyright was restored. Outside the USA, the film has always been owned by .

* A by John Barry featuring one side of film score music and one side of "" music was released on the in the UK and outside the Commonwealth
* A by was released to coincide with the film that features scenes and stills not in the completed film
* Conte s decorated with artwork and stills from the film were produced.
* Though not advertised as a film tie in, in the United States in the mid 1960's, a child's toy the size of a called a "Zulugun" was produced that shot plastic sticking darts that reportedly were often inhaled and swallowed. [http://www.chestjournal.org/cgi/reprint/55/4/356-a.pdf]

* The "Battle of Helm's Deep" sequence in 's "" was filmed in a manner deliberately reminiscent of "Zulu", according to Jackson's comments in supplemental material included in the special extended DVD edition of "The Two Towers".
*The Germanic war chant in the battle scene at the beginning of 's film "Gladiator" is the Zulu war chant from "Zulu". In the video commentary, Scott revealed that "Zulu" was one of his favourite movies.
*The Battle of O'Rourke's Ford in 's science fiction novel "" is a recreation of the movie premise, right down to a malingering Private Hook.

* Hall, Dr Sheldon "Zulu: With Some Guts Behind It: The Making of the Epic Movie" 2005 Tomahawk Press