History of the Constitution

The first semblance of a Constitution for Canada was the Royal Proclamation of 1763. The Act renamed the northeasterly portion of the former French Province of New France. The newly British “Province of Quebec” was roughly coextensive with the lower third of contemporary Quebec. The Proclamation, which established an appointed colonial government, was the “de facto” constitution of Quebec until 1774, when the British Parliament passed the Quebec Act, which expanded the province’s boundaries to the Ohio and Mississippi rivers, which was one of the grievances listed in the United States Declaration of Independence. Significantly, the Quebec Act also replaced the French criminal law presumption of ‘guilty until proven innocent’ with the English criminal law presumption of ‘innocent until proven guilty’; but the French code or civil law system was retained for non-criminal matters. 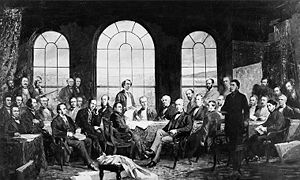 A painting depicting negotiations that would lead to the enactment of the British North America Act, 1867

The Treaty of Paris of 1783 ended the American War for Independence and sent a wave of British loyalist refugees northward to Quebec and Nova Scotia. In 1784, the two provinces were divided. Nova Scotia, Cape Breton Island (rejoined to Nova Scotia in 1820), Prince Edward Island, and New Brunswick; while Quebec was split into Lower Canada (southerly Quebec) and Upper Canada (southerly through lower northern Ontario and all or parts of Michigan until 1796, 1818 and 1847).

The winter of 1837-38 saw rebellion in both of the Canadas, with the result they were rejoined as the Province of United Canada in 1841. This was reversed by the British North America Act in 1867 which established the Dominion of Canada.

Initially, on 1 July 1867, there were four provinces in confederation as “One dominion under the name of Canada”: Canada West (former Upper Canada; now, Ontario), Canada East (former Lower Canada; now, Quebec), Nova Scotia, and New Brunswick. Title to the Northwest Territories was transferred by the Hudson’s Bay Company in 1868, and the Province of Manitoba was the first created out of it, and the first province created by Ottawa instead of London, in 1870. British Columbia joined confederation in 1871, followed by Prince Edward Island in 1873. Alberta and Saskatchewan were created by Ottawa in 1905, followed by the Yukon Territory in 1912. The Dominion of Newfoundland, Britain’s oldest colony in the Americas, joined Canada as a Province in 1949. Nunavut Territory was created in 1999.

An Empire Conference in 1931 that included the leaders of all dominions, and representatives from India (which then included Burma, Bangladesh and Pakistan) produced the Statute of Westminster. The Statute, an essential transitory step from “British Empire” to “Commonwealth of Nations”, provided that all existing dominions became fully independent of the United Kingdom upon its ratification by the dominion legislatures (for Canada and Australia, the federal legislatures only); and all new dominions would be fully independent upon the grant of dominion status. There were two exceptions – Newfoundland and Canada.

Newfoundland never ratified the Statute, so that it was still subject to imperial authority when its entire system of government and economy collapsed utterly in the mid-1930s. Canada did ratify the Statute, but had requested an exception because the Canadian federal and provincial governments could not agree on an amending formula for the Canadian Constitution. It would be another 50 years before this was achieved. In the interim, the British Parliament periodically passed enabling acts with respect to amendments to Canada’s Constitution; this was never anything but a rubber stamp.[3]

The patriation of the Canadian Constitution was achieved in 1982 when the British and Canadian parliaments passed parallel acts – the Canada Act, 1982 ([UK] 1982, c.11) in London, and the Constitution Act 1982 in Ottawa. Thereafter, the United Kingdom was formally absolved of any remaining responsibility for, or jurisdiction over, Canada; and Canada became responsible for her own destiny. In a formal ceremony on Parliament Hill in Ottawa, the Queen signed both acts into law on April 17, 1982.

The Canada Act/Constitution Act included the Canadian Charter of Rights and Freedoms. Prior to the Charter, there were various statutes which protected an assortment of civil rights and obligations, but nothing was enshrined in the Constitution until 1982. The Charter has thus placed a strong focus upon individual and collective rights of the people of Canada.

The Act also codified many previously oral constitutional conventions, and has made amendment of the Constitution significantly more difficult. Previously, the Canadian federal constitution could be amended by solitary act of the Canadian or British parliaments, by formal or informal agreement between the federal and provincial governments, or even simply by adoption as ordinary custom of an oral convention or unwritten tradition that was perceived to be the best way to do something — or just the way things had always worked; there remains no legal definition as to what the office of prime minister specifically is. Since the Act, amendments must now conform to certain specified provisions in the written portion of the Canadian Constitution (see amendment formula).

This was an Act of the British Parliament, originally called the British North America Act 1867, that created the Dominion of Canada out of three separate provinces in British North America (Province of Canada, New Brunswick, and Nova Scotia) and allowed for subsequent provinces and colonies to join this union in the future. It outlined Canada's system of government, which combines Britain's Westminster model of parliamentary government with division of sovereignty (federalism). Although it is the first of 20 British North America Acts, it is still the most famous of these and is understood to be the document of Canadian Confederation (i.e. union of provinces and colonies in British North America). With the patriation of the Constitution in 1982, this Act was renamed Constitution Act, 1867. In recent years, the 1867 document has mainly served as the basis on which the division of powers between the provinces and federal government have been analyzed.

Endorsed by all provinces, except by the Quebec government led by René Lévesque, this was the formal Canadian Act of Parliament that achieved full and final political independence from the United Kingdom. Part V of this Act established an amending formula for the Canadian Constitution, the lack of which (due to more than 50 years of disagreement between the federal and provincial governments) was the only reason Canada's constitutional amendments still required approval by the British Parliament after ratification of the Statute of Westminster in 1931.

More importantly, Part I of the Act is the Canadian Charter of Rights and Freedoms which outlines the civil rights and liberties of every citizen in Canada, such as freedom of expression, of religion, and of mobility. Part II addresses the rights of Canada's Aboriginal people.

Canadian Charter of Rights and Freedoms

As noted above, this is Part I of the Constitution Act, 1982. The Charter is the constitutional guarantee of collective and individual rights. It is a relatively short document and written in plain language in order to ensure accessibility to the average citizen. It is said that it is the part of the constitution that has the greatest impact on Canadians' day-to-day lives, and has been the fastest developing area of constitutional law for many years. Only applies to government and government actions with the intention to prevent government from creating laws that are unconstitutional.

Main article: Amendments to the Constitution of Canada

With the Constitution Act, 1982, amendments to the constitution must be done in accordance with Part V of the Constitution Act, 1982 which provides for five different amending formulas. Amendments can be brought forward under section 46(1) by any province or either level of the federal government. The general formula is set out in section 38(1), known as the "7/50 formula", requires: (a) assent from both the House of Commons and the Senate; (b) the approval of two-thirds of the provincial legislatures (at least seven provinces), representing at least 50% of the population (effectively, this would include at least Quebec or Ontario, as they are the most populous provinces). This formula specifically applies to amendments related to the proportionate representation in Parliament, powers, selection, and composition of the Senate, the Supreme Court and the addition of provinces or territories. The other amendment formulas are for exceptional cases as provided by in the Act:

Vandalism of the proclamation paper

In 1983, Peter Greyson, an art student, entered Ottawa's National Archives (known today as Library and Archives Canada) and poured red paint over a copy of the proclamation of the 1982 constitutional amendment. He said he was displeased with the federal government's decision to allow U.S. missile testing in Canada, and had wanted to "graphically illustrate to Canadians" how wrong he believed the government to be. A grapefruit-sized stain remains on the original document; restoration specialists opted to leave most of the paint intact, fearing that removal attempts would merely cause further damage.[4]

Sources of the Constitution

There are three general methods of constitutional entrenchment:

The existence of an unwritten constitution was reaffirmed by the Supreme Court in Reference re Secession of Quebec.

“The Constitution is more than a written text. It embraces the entire global system of rules and principles which govern the exercise of constitutional authority. A superficial reading of selected provisions of the written constitutional enactment, without more, may be misleading.”

In practice, there have been three sources of unwritten constitutional law:

Conventions
Constitutional conventions form part of the constitution, but they are not legally enforceable. They include the existence of a Prime Minister and Cabinet, the fact that the Governor General is required to grant Royal assent to bills adopted by both Houses of Parliament, and the requirement that the Prime Minister either resign or request a new general election upon losing a vote of non-confidence in the House of Commons.
Royal prerogative
Reserve powers of the Canadian Crown; being remnants of the powers once held by the British Crown, reduced over time by the parliamentary system. Primarily, these are the Orders in Council which give the government the authority to declare war, conclude treaties, issue passports, make appointments, make regulations, incorporate, and receive lands that escheat to the Crown.
Unwritten principles
Principles that are incorporated into the Canadian constitution by reference from the preamble of the Constitution Act, 1867. Unlike conventions, they are legally binding. Amongst the recognized constitutional principles are federalism, democracy, constitutionalism and the rule of law, and respect for minorities.[5] Other principles include responsible government, representation by population[citation needed], judicial independence, parliamentary supremacy and an implied bill of rights. In one case, the Provincial Judges Reference (1997), it was found a law can be held invalid for contradicting unwritten principles, in this case judicial independence.