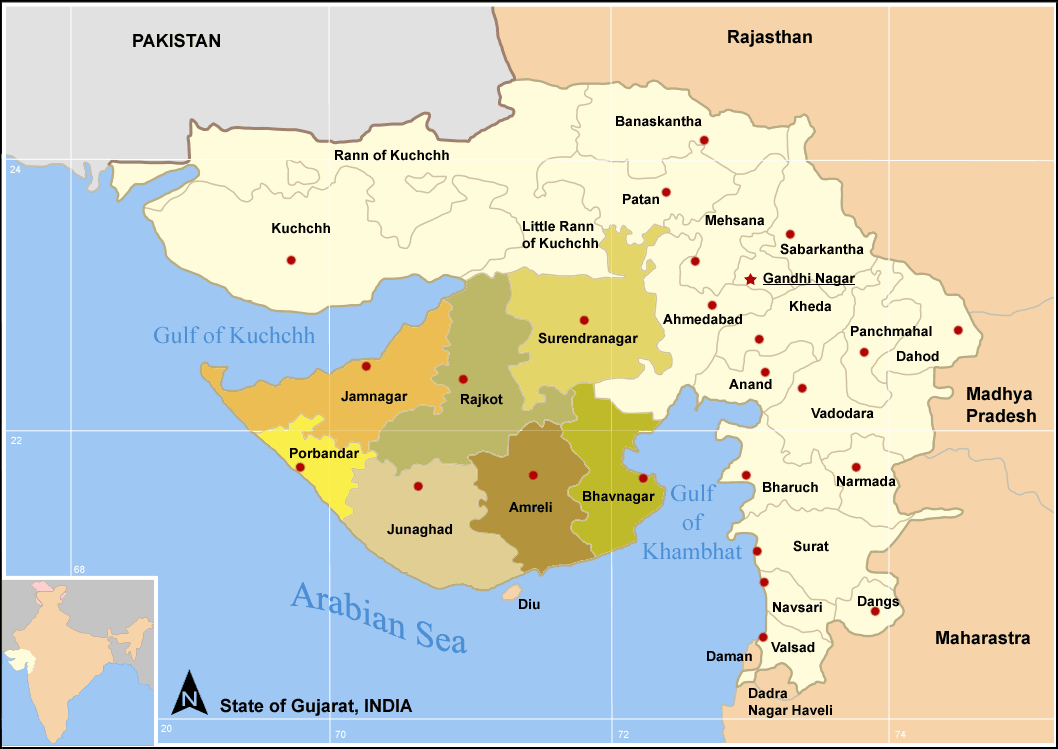 Saurashtra (also Soruth and Sorath) is a region of western , located on the coast of state. It is a peninsula also called after the Kathi Darbar rulers who ruled part of the region once. The Peninsula is shared with the Kutch region which occupies the north, Saurashtra or Sorath forming the southern portion.

Surastrene, or is mentioned in the 1st century CE : cquotetxt
"Beyond the gulf of Baraca is that of Barygaza and the coast of the country of Ariaca, which is the beginning of the Kingdom of Nambanus and of all India. That part of it lying inland and adjoining Scythia is called , but the coast is called Syrastrene. It is a fertile country, yielding wheat and rice and sesame oil and clarified butter, cotton and the Indian cloths made therefrom, of the coarser sorts. Very many cattle are pastured there, and the men are of great stature and black in color. The metropolis of this country is , from which much cotton cloth is brought down to .
Periplus, Chap. 41
[http://www.fordham.edu/halsall/ancient/periplus.html Source]
color=silver
size=360%Sorath was the former name of the Muslim-ruled Princely State of ("Junagarh" or the "Old City"). In 1947, Junagadh's Muslim ruler desired to accede his territory to Pakistan, but the predominantly Hindu population rebelled, and while he fled to Pakistan, a plebiscite was conducted as a result of which the kingdom was merged into the Indian Union.

During British rule, Junagadh and its neighboring princely states were supervised by the (WISA).

The first s of the state were issued for Junagadh in 1864. They consisted of three lines of Hindi script in colorless letters on black, and were produced by handstamping with ink. A second issue, in 1868 used colored letters, printed in black or red on several colors of paper.

The issue of 1877 was the first to include Latin letters; the circular design included the inscription "SORUTH POSTAGE" at the top, and "ONE ANNA OF A RUPEE" (or "FOUR ANNAS...") at the bottom. Some of these were d in 1913-14, followed by redesigned stamps in 1914.

The next issue came in 1923, and featured a portrait of Nawab , along with the inscription "SAURASHTRA POSTAGE". A set of eight stamps in 1929 including pictures of Junagadh, the , and the in addition to the Nawab. In 1937 the one anna value was reissued reading "POSTAGE AND REVENUE".

The Indian province of Saurashtra did not design any of its own stamps, but before adopting the stamps of India, Saurashtra issued a court fee stamp overprinted for postal use, then created more one anna stamps by surcharging three stamps of the 1929 issue.