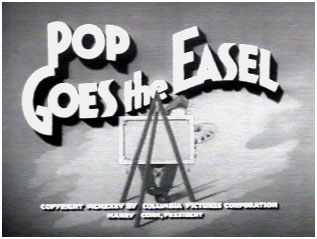 "Pop Goes the Easel" is the seventh starring American comedy team the . The trio made a total of 190 shorts for between 1934 and 1959.

*This is the first Three Stooges short directed by silent comedy veteran .
*The title of the film "Pop Goes the Easel" is a parody of the "," which is used for the one and only time as the opening theme. [Solomon, Jon. (2002) "The Complete Three Stooges: The Official Filmography and Three Stooges Companion", p. 61; Comedy III Productions, Inc., ISBN 0971186804] The film also ends with the tune, as with the ending of "".
*The two girls playing hopscotch on the sidewalk 's daughter, and 's daughter, .
*This is the first of several Stooge shorts in which Moe holds out his hand to Curly and asks him to "pick out two" fingers. Curly does, and Moe pokes him in the eyes with them. This would be a recurring joke.
*This short is the first to contain a clay throwing fight, a precursor to the classic pie fights which would become a staple of the Stooge films. The first genuine pie fight would appear the following year in "".
*This is the first of several Stooge shorts in which Moe holds out his fist to Curly and says, "See that?" When Curly replies, "Yeah," Moe swings his fist in a circle behind his body, over his head, and bops Curly on the head with it.
*This is the first short in which Curly dresses in drag. Curly would somehow wind up in drag in several later Stooge shorts, such as "", "", "", "" and "".
*A colorized version of this film was released in 2006. It was part of the DVD collection entitled " [http://www.amazon.com/dp/B000H5TH1G/ Stooges on the Run] ."