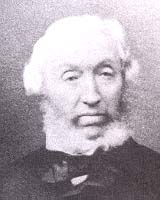 Anthony Salvin ( &ndash; ) was an English . He gained a reputation as an expert on medieval buildings and applied this expertise to his new buildings and his restorations. He restored castles and country houses, and built a number of new houses and churches.

He was born in , , as the only child of General Anthony Salvin, a soldier, and his second wife Elizabeth (Eliza) Mills. He was educated at and then became a pupil of John Paterson of while he was working on the restoration of in County Durham. In 1821 Salvin moved to London. He had an introduction to Sir John Sloan but did not enter his office. According to his nephew he entered the office of John Nash. In 1824 he was elected as a fellow of the Society of Antiquaries. Soon after this he went on a sketching tour of Great Britain. On 26 July 1826 he married his cousin, Anne Andrews Nesfield. With her he had six children, two of whom died in infancy.

Salvin's first major commission was Mamhead Park in for Robert William Newman. This was designed in the Tudor style to a symmetrical plan. It was adapted from a plan by and this placed restrictions on his design. His next design was for Moreby Hall in the for Henry Preston where he was free to develop a complete design in the Tudor style, again on a symmetrical plan. At in he designed for Edward Hussey an asymmetrical design in the Tudor style. In 1831 Salvin embarked on what is considered to be his most important early domestic work at in for Gregory Gregory. Salvin's design combined elements from in and in . However before the building was complete, Salvin was replaced as architect by . In 1835 Salvin spent five weeks in Germany.

Most of Salvin's designs for major houses continued to be in the Tudor style. These include in for Ralph Sneyd, and in for . There were exceptions, including Penoyre in , an Italianate villa-style house for Colonel John Lloyd Vaughan Watkins and in , in the French empire style for Sir William Geary.

A major part of Salvin's work was to restore, refit and create castles. In 1835 he refaced , in 1844 he repaired the ruins of Newark Castle and in 1845 he repaired the ruins of . In the early 1840s the Queen's Gate of collapsed and in 1844 Salvin repaired it and rebuilt some of the other masonry of the castle. In 1951 he surveyed the Beauchamp Tower of the and, after working on this he restored the Salt, the Wakefield and the White Towers and the Chapel of St Peter ad Vincula. Following this he was instructed by Prince Albert to carry out work on . This included replacing s with lancets and ed windows and rebuilding the Clewer Tower. Salvin designed in for as a re-creation of a castle of the time of Edward I. In 1852 he started work on the restoration of in . This included replacing one of the towers with a larger tower, the Prudhoe Tower, creating a , replacing windows and replanning the interior.

Salvin also restored and repaired 20 old churches and three cathedrals, and built 34 new churches. In the early 1840s he had worked on and following this he was made an honorary member of the . He arranged for the removal of buildings around the south transept of and reordered its choir. He also made alterations to Durham and s.

In 1857 while working on , Salvin suffered a stroke but recovered from it. In 1860 his wife died and he designed a new house for himself, Hawksfold at , . In 1863 he was awarded the royal gold medal of the and in 1879 he retired from formal practice. He died at Hawksfold in 1881 and was buried at Fernhurst. His estate was valued at over £78,000.