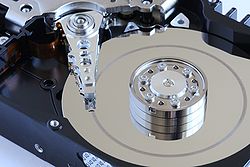 A head crash in a modern drive. Note circular mark on the platter.

A head crash is a hard-disk failure that occurs when a read–write head of a hard disk drive comes in contact with its rotating platter, resulting in permanent and usually irreparable damage to the magnetic media on the platter surface.

A head normally rides on a thin film of moving air entrapped at the surface of its platter (some drives of the mid-1990s used a thin liquid layer instead). The topmost layer of the platter is made of a Teflon-like material that acts like a lubricant. Underneath is a layer of sputtered carbon. These two layers protect the magnetic layer (data storage area) from most accidental touches of the read-write head.[1]

The disk read-and-write head is made using thin film techniques that include materials hard enough to scratch through the protective layers. A head crash can be initiated by a force that puts enough pressure on the platters from the heads to scratch through to the magnetic storage layer. A tiny particle of dirt or other detritus, excessive shock or vibration, or accidentally dropping a running drive can cause a head to bounce against its disk, destroying the thin magnetic coating on the area the heads come in contact with, and often damaging the heads in the process. After this initial crash, countless numbers of fine particles from the damaged area can land onto other areas and can cause more head crashes when the heads move over those particles, quickly causing significant damage and data loss, and rendering the drive useless. Some modern hard disks incorporate free fall sensors to offer protection against head crashes caused by accidentally dropping the drive.

Since most modern drives spin at rates between 5,400 and 15,000 RPM, the damage caused to the magnetic coating can be extensive. At 7,200 RPM the edge of the platter is traveling at over 120 kilometres per hour (75 mph), and as the crashed head drags over the platter surface the read-write head generally overheats, making the drive or at least parts of it unusable until the heads cool. 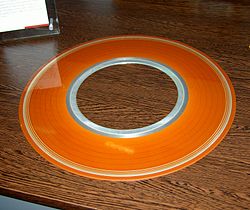 Older drives typically rotated far more slowly and had larger heads flying higher above the surface of the medium. However, since in many cases the medium was housed in a removable cartridge or pack and since air filtration was comparatively crude, crashes were fairly frequent and invariably expensive.