Máel Dúin is the protagonist of Immram Maele Dúin or the Voyage of Máel Dúin, a Christian tale written in Old Irish around the end of the first millennium. He is the son of Ailill Edge-of-Battle, whose murder provides the initial impetus for the tale.

Máel Dúin is the son of a warrior and chieftan. His mother is a nun. His mother had given him to the queen of Eoganacht to be raised as a foster son. Máel Dúin grew up as an attractive warrior who was "victorious over everyone in every game they used to play, both in running and leaping and spear casting and casting stones and racing horses." A jealous youth exposed him to the truth of his unknown kindred. Prior to this knowledge he thought he was the son of the king and queen. He inquired this information from the queen. She gave him to his biological mother who told him about the death of his father, Ailill Ochair Aghra of the Eugnacht of Ninuss.

Máel Dúin traveled to where his kinsmen were and finds out his father was slain by Marauders from Leix, who burned the church named Dubcluain upon him. Máel Dúin seeks the advice of a druid named Nuca at Corcomroe who tells him how to get there and in what manner. Máel Dúin follows the druid's advice up to a point, except that he allows his foster brothers to join him, thus exceeding the number of people the druid stipulated should be allowed accompany him on his immram. Because of this Máel Dúin is blown off course and into a great voyage where he has a number of peculiar experiences both from within his boat, where generally he sees fantastic things, and on a series of islands he and his crewmen elect to visit.

This begins the journey. He first encounters two bare islands with forts on them. From the forts could be heard, "noise and the outcry of drunkenness." Máel Dúin then hears one man say, "It was I who slew Ailill Ochair of Agha and burned Dubcluain on him and no evil has been done to mefor it yet by his kindred..." Máel Dúin and his crew cannot venture to the island due to wind. Máel Dúin suggested that God will bring the boat where it needs to go.However, the boats sails to the limitless ocean. Blame is to be held on the foster brothers as well for joining the crew after the druid gave specific orders for the allotted crewmen.

Máel Dúin and his crewmen encounter many various islands as follows:

The crew voyaged on and came across a sea like a green crystal. Here, there were no monster but only rocks. They continued on and came to a sea of clouds with underwater fortresses and monsters.

They find a man in the sea from Tory. He was cast there as punishment. He asks them to throw their wealth into the ocean. He prophesizes that they will "reach their country, it will be sage thus; though you will meet your enemies, you will not slay them."

They finally make it back to the original island they were on where there was talk of murdering Ailill. Máel Dúin expresses the marvels that God has revealed to them on their journey. They all make peace.

During his immram, Máel Dúin has a Christian conversion experience. He also loses his three foster brothers at different points along the way, allowing him to finally reach the marauders who killed his father and whom he initially set out to kill in revenge. However, as he has incorporated a new, Christian element into his personality he does not kill them but instead forgives them before returning home.

The text exists in an 11th century redaction, by a certain Aed the Fair, described as the "chief sage of Ireland," but it may be gathered from internal evidence that the tale itself dates back to the 8th century. It belongs to the group of Irish romance, the Navigations (Imrama), the common type of which was possibly imitated from the classical tales of the wanderings of Jason, Ulysses, and Aeneas. 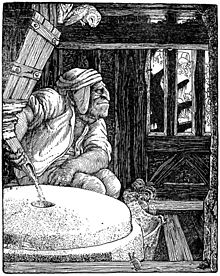 "The mill of Grudging". Illustration by John D. Batten, in Joseph Jacobs' The Book of Wonder Voyages

Imram Curaig Mailduin is preserved, in each case imperfectly, in the Lebor na hUidre, a manuscript in the Royal Irish Academy, Dublin; and in the Yellow Book of Lecan, MS. H. 216 in the Trinity College Library, Dublin; fragments are in Harleian MS. 5280 and Egerton MS. 1782 in the British Museum. There are translations by Patrick Joyce, Old Celtic Romances (1879), by Whitley Stokes (a more critical version, printed together with the text) in Revue celtique, vols. ix and x (1888–1889). See H. Zimmer, "Brendan's Meer-fahrt" in Zeitschrift für deutsches Altertum, vol. xxxiii (1889). Tennyson's Voyage of Maeldune, suggested by the Irish romance, borrows little more than its framework.

A Celtic Odyssey by Michael Scott is a modern retelling of this story.[3]