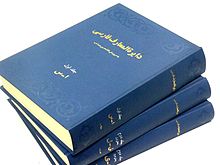 The three volumes of the Persian Encyclopedia

The Persian Encyclopedia (دایرةالمعارف فارسی) is one of the most comprehensive and authoritative Encyclopedias written in the Persian language. It is a two-volume encyclopedia published as three physical volumes.

The encyclopedia was based, in part, on the 1953, 1960, and 1968 editions of The Columbia Viking Desk Encyclopedia. It was initially published under the supervision of Gholamhossein Mosaheb, who started the project in 1955 in the Franklin Book Programs office in Tehran. Mosaheb left the project after the first volume (words starting with Alef to Seen) was published in 1966.

The second volume was actually published in two "parts", making the encyclopedia three physical volumes. The first part (Sheen to Lam) was published in 1978, ten years after the first volume. it was supervised by Reza Aghsa.

The Iranian revolution in 1979, the death of Mosaheb in the same year, and the takeover of the assets of the Franklin office in Tehran by the government delayed further publication.

The second part (Meem to Yeh) was published by Amirkabir in 1996, eighteen years after the first part of the volume, but not mentioning a new supervisor's name.