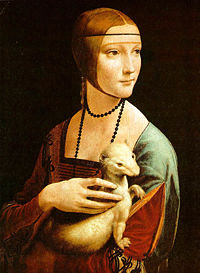 A dæmon (pronounced /ˈdiːmən/) is a manifestation of a person's soul in the Philip Pullman trilogy His Dark Materials. Humans in every universe are said to have dæmons, although in some universes they are visible as entities physically separate from their humans, and take the form of animals, while in other universes they are not. Dæmons have human intelligence, are capable of human speech—regardless of the form they take—and usually behave in all respects as though they are independent of their humans. Prepubescent children's dæmons can change form voluntarily, almost instantly, to become any creature, real or imagined, although there is an upper limit to the physical size they can attain. At some point during their adolescence a person's dæmon undergoes what is called "settling", in some universes, an event in which that person's dæmon permanently, involuntarily assumes the form of the animal which the person most resembles in character. Dæmons and their humans are almost invariably not of the same gender.

Although humans are physically separate from their dæmons, they are metaphysically connected, and most human-dæmon pairs cannot bear to be distanced by more than several yards; Lyra Belacqua showed significant discomfort when her dæmon flew up to the second story window of a tower while she was standing outside the building in question for only a couple of seconds, and another character expressed surprise when a shaman's dæmon was able to travel at least forty feet away from him. Such separation, sometimes called "pulling", causes extreme pain, as well as severe mental and emotional trauma.[2] It is revealed in The Amber Spyglass that a person can achieve the lasting ability to separate painlessly from his or her dæmon by undergoing an initial voluntary separation over an implied distance of miles. Ordinarily this tortuous process is undertaken only by witches and shamans.

Although they physically mimic animals perfectly, and, to an extent, exhibit the usual behaviors of the animals they resemble, dæmons are not true animals, and humans, dæmons, and true animals are usually able to distinguish them on sight. The faculty or quality that makes this possible is not explained in the books, but it is demonstrated extensively, and is reliable enough to allow humans to distinguish a bird-shaped dæmon from a flock of birds in flight.

In Lyra's world, the soul is physically manifested in the form of an animal called a dæmon.[3] It has a separate identity from its respective human, despite being an integral part of the person (i.e. they are one entity, in two bodies).

In our universe and others, the books suggest that dæmons are integrated with the person, without any external or physical form. They have a natural physical manifestation only in Lyra's universe and a select few others. Dæmons that are already physical, such as Lyra's dæmon Pantalaimon, remain external manifestations when they visit universes with normally-internal dæmons, such as our own universe. Typically dæmons and their humans remain conscious and sleep at the same times, although the dæmons of witches and shamans—as revealed in The Amber Spyglass—can remain awake while their humans sleep, and it is implied in Northern Lights that cedarwood can have a soporific effect on dæmons that allows them to sleep even if their humans remain conscious.

"The worst breach of etiquette imaginable" is for a human to touch another person's dæmon; even in battle, it is said, most soldiers would never touch an enemy's dæmon, though exceptions can be made (such as between lovers). The physical handling of a dæmon causes vulnerability and weakness in the person whose dæmon is being touched; establishing the sexual implications of human/dæmon contact, Lyra Belacqua feels violated when doctors manhandle her dæmon into a machine intended to separate them, and later experiences a flush when Pantalaimon licks Will Parry's injuries while in an Irish wolfhound form to comfort him due to Will lacking a dæmon of his own. However, dæmons can touch other dæmons freely; interactions between dæmons usually accentuate and illuminate the relationships between the characters, and have also been used as a means of passing information between humans without being overheard.

A child's dæmon has no fixed form, and may instantly change into other animal shapes according to whim and circumstance. This "shape-shifting" ability, and the fact that a dæmon disappears instantly upon its human's death, would seem to imply that dæmons are less than completely corporeal. However, their bodies are solid, and they can interact fully with people and objects in the material world. In Northern Lights (titled The Golden Compass in the US) and The Amber Spyglass, it is noted that Pantalaimon has a heartbeat of his own.

As children resolve their mature personalities (at approximately the age of puberty), their dæmons "settle" into a form which reflects the person's personality. For example, a human with a dog dæmon may tend to follow authority—in Northern Lights it is noted that all servants have dog dæmons (although a maid was noted with a hen dæmon)—and likewise all witches' dæmons take the form of a bird of some kind. A person with a cat dæmon may be very independent. There is no mention that some extraordinary change in personality might cause a dæmon's form to later change. At the beginning of the trilogy, Lord Asriel claims that the act of settling triggers Dust to begin to be attracted to the person.

A person's dæmon is usually of the opposite sex to its human; however, in some cases it may be the same sex as the person. Pullman has admitted that the reason for this is unknown even to himself, but has admitted that despite rumored speculation, it does not represent homosexuality, but might indicate some other sort of gift or quality, such as second sight.[4] The single reference to such individuals is in Northern Lights, where their rarity is established. Fans of the series speculate that a person with a dæmon of the same sex may be transgendered, which would account for their rarity.

It is uncertain when or how a dæmon is "born" or into what form they are "born". When a person dies, their dæmon fades away, like "atoms of smoke." (The books do suggest that this is Dust, because Mr. Scoresby finds his dæmon's Dust after he turns into Dust himself.) Likewise, if a dæmon is killed—the death being described as the dæmon bursting into golden light, although the violent nature of the death described may have contributed to this—their human dies. The origin of a dæmon's name was not given in the books, but clarified by Philip Pullman[5] as normally given by the parents' dæmons. As Will Parry came from our world, his dæmon had no name initially and was named Kirjava (a Finnish word, meaning mottled or many-coloured) by Serafina Pekkala when she first met the dæmon.

Generally, a person and his or her dæmon must stay within a short distance of each other. Forcibly separating a person from his or her dæmon causes unimaginable physical and emotional pain for both entities, often leading to death; however, some cultures have mastered techniques that allow the dæmon to gain wider mobility. For example, witches, as well as humans who commit to becoming shamans, must endure grueling, ritualistic ordeals that involve leaving their dæmon for a time as they embark on a spiritual quest, crossing an area of death where nothing may grow or live and leaving the dæmon behind. After rejoining their dæmon they gain the ability to separate from them to a far greater extent than was previously possible. Both witches and shamans retain their intimate bond with their dæmon; the only change is in the distance they can travel apart from each other. 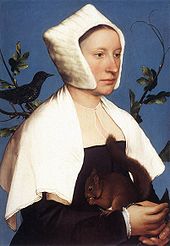 In the trilogy, a special guillotine is used by the General Oblation Board to separate people from their dæmon without killing them (intercision). However, unlike the ordeals undergone by witches and human shamans, the guillotine violently and permanently severs the bond between person and dæmon, and drastically reduces the person's creativity, intelligence, and will: the adults that have gone through the process seem blank and lifeless, and their dæmons seem subdued and incurious. The General Oblation Board continually perfects the process through experimentation, but Lyra encounters at least one boy who could not bear living without his dæmon and dies. When she finds dæmons that have been separated from their people, the creatures are insubstantial and needy: they cluster desperately, ignoring the contact taboo. The separation process also releases a huge burst of energy, which was used by Lord Asriel to create a bridge into the world containing Cittàgazze.

Aside from dæmons, all people possess a ghost which lives on after they die, and a death that leads their ghosts to the underworld. For those with external dæmons, the ghost appears to represent the part of the person which inhabited their own body (as opposed to their dæmon, which dissipates upon death). Ghosts have vague forms resembling what the person looked like in life. Deaths can only be seen by their counterparts in certain worlds, like dæmons. They appear as plain and unfeatured, but kindly, figures, who move closer and closer to their persons as the time of death approaches.

Lyra is confronted with her death when she and Will enter the underworld in an attempt to contact the ghost of Lyra's dead friend, Roger. Although the dæmon dissipates upon a person's death, the ghost is led away by their death and would become, at the time, trapped indefinitely in the underworld. Will and Lyra rectify this problem by creating a process by which the ghosts can escape. Once the ghosts exit out into the real world, they can disintegrate and rejoin with their dæmons, as disconnected atoms reuniting with the rest of the universe.

In the Norwegian, Danish, Serbian, Italian, Swedish and Finnish editions of His Dark Materials the word "dæmon" is changed to "daimon". In Icelandic, the name "fylgja" (lit. follower), in reference to familiar spirits of folk lores is used. In the Spanish edition, the term "dæmon" is changed to "daimonion". The Portuguese translation of the books render the word as "génio" in reference to the familiar spirits in Greco-Roman mythology, although Brazilian new versions use "dimon" (the old edition, from before the film, uses "dæmon") . In the Hungarian edition, the term is rendered as daimón. In the Hebrew edition, the term is translated phonetically, apart for the mock-bible excerpts quoted in chapter 21 of The Golden Compass; there, the word used for dæmon is "er'el", meaning angle, resembling the biblical Hebrew word for foreign gods - "elil" (literally meaning "small deity"). This reminisces the Greek Septuagint translation of the Old Testament, in which the word "elil" was made "daimon".

Mary Malone is taught that, with practice, it is possible to see nonphysical manifestations of dæmons in our universe of people who do not even know they have one. The suggestion is that we all have dæmons, but we have not learned to recognize and display them. Some people however, 'see' their dæmon as a separate part of their own consciousness, and project and talk to their dæmon. Possibly in a similar way as in the book The Daemon Page

Concepts similar to that of the dæmon can be found in several cultures' belief systems, such as Fylgja from Norse mythology, Naguals and Tonals from Aztec mythology, aku-aku from Easter Island, and familiar spirits from early modern English witchcraft. Elsewhere, a parallel can be seen in the Jungian concept of the anima and animus. However, the most famous dæmon holder was Socrates, who claimed (metaphorically) that he could see and talk to it.

Dæmon as a manifestation of a person's soul was described by American sci-fi writer C. L. Moore in a short story Dæmon (1946). Moore's dæmons were a human-shaped creatures of different colors, following a master wherever he/she goes. They were invisible for common people, but the protagonist, a boy with mental retardation, named Luis O'Bobo, was able to see other people's dæmons.