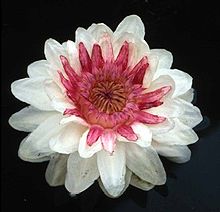 Water Lily of at Sambalpur

/ˌnɪmfiːˈeɪʃiː/ or /ˌnɪmfiːˈeɪsi.iː/) is a family of flowering plants. Members of this family are commonly called water lilies and live in freshwater areas in temperate and tropical climates around the world. The family contains eight genera. There are about 70 species of water lilies around the world.[1] The genus Nymphaea contains about 35 species across the Northern Hemisphere.[1] The genus Victoria contains two species of giant water lilies and can be found in South America.[1] Water lilies are rooted in soil in bodies of water, with leaves and flowers floating on the water surface. The leaves are round, with a radial notch in Nymphaea and Nuphar, but fully circular in Victoria.

Nymphaeaceae has been investigated systematically for decades because they are believed to represent an early group of angiosperms. The basal angiosperms are the first flowering plants to diverge from the ancestral angiosperm. In particular, the most basal angiosperms are so called the ANITA grade, which consist of Amborella, Austrobaileyales and Nymphaeales. The taxonomic position of the Nymphaeaceae has always been somewhat doubtful. The anatomy of these plants is more nearly that of the monocotyledons, while the venation of the leaves would indicate that they are dicotyledons. The sacred lotus family Nelumbonaceae was once thought to be a water lily, but is now recognized to be a highly modified eudicot in the order Proteales. The order Nymphaeales is a lineage separate from monocots or eudicots.

The current phylogenetic placement is:

Although Nymphaeaceae is small taxonomically, the relationships among genera of water lilies have not been clear and no single classification has become widely accepted. The family comprises two subfamilies: Cabomboideae, including Cabomba and Brasenia, and Nymphaeoidae, with six remaining genera, Nymphaea,Nuphar, Barclaya, Euryale, Ondinea and Victoria. Both are often recognized as families. In the past Nymphaeaceae often have been treated to include Cabombaceae but this is often treated as a separate family in the same order (Nymphaeales). The genus Barclaya is sometimes given rank as its own family Barclayaceae on the basis of an extended perianth tube (combined sepals and petals) arising from the top of the ovary and by stamens that are joined basally, but recent work lends weight to placing it in the Nymphaeaceae.

The Nymphaeaceae are aquatic, rhizomatous herbs. The family is further characterized by scattered vascular bundles in the stems, and frequent presence of latex, usually with distinct, stellate-branched sclereids projecting into the air canals. Hairs are simple, usually producing mucilage (slime). Leaves are alternate and spiral, opposite or occasionally whorled, simple, peltate or nearly so, entire to toothed or dissected, short to long Petiole (botanyiolate), with blade submerged, floating or emergent, with palmate to pinnate venation. Stipules are either present or absent. Flowers are solitary, bisexual, radial, with a long pedicel and usually floating or raised above the surface of the water, with girdling vascular bundles in receptacle. Tepals are 4-12, distinct to connate, imbricate, and often petal-like. Petals lacks or 8 to numerous, inconspicuous to showy, often intergrading with stamens. Stamens are 3 to numerous, the innermost sometimes represented by staminodes. Filaments are distinct, free or adnate to petaloid staminodes, slender and well differentiated from anthers to laminar and poorly differentiated from anthers; pollen grains usually monosulcate or lacking apertures. Carpels are 3 to numerous, distinct or connate. Fruit is an aggregate of nuts, a berry, or an irregularly dehiscent fleshy capsule. Seeds are often arillate, more or less lacking endosperm.

The beautiful nature of water lilies has led to their widespread use as ornamental plants. The Mexican water lily, native to the gulf coast of North America, is planted throughout the continent. It has escaped from cultivation and become invasive in some areas, such as California's San Joaquin Valley. It can infest slow moving bodies of water and is difficult to eradicate. Populations can be controlled by cutting top growth. Herbicides can also be used to control populations using glyphosate and fluridone.[2]

lily pads floating in a lake in Toronto, Canada. 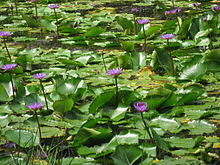 Water lilies were depicted by the French artist Claude Monet (1840–1926) in a series of paintings.