Maamme (Finnish) or Vårt land (Swedish) (“our land”) is the title of Finland's national anthem. There is no law on an official national anthem in Finland, but Maamme is firmly established by convention.

The music was composed by the German immigrant Fredrik Pacius, with (original Swedish) words by Johan Ludvig Runeberg, and was performed for the first time on 13 May 1848. The original poem, written in 1846 but not printed until 1848, had 11 stanzas and formed the prologue to the great verse cycle The Tales of Ensign Stål ("Fänrik Ståhls Sägner"), a masterpiece of Romantic nationalism. The current Finnish text is usually attributed to the 1889 translation of Ensign Stål by Paavo Cajander, but in fact originates from the 1867 translation by Julius Krohn.[1][2]

The Tales of Ensign Stål were much appreciated throughout all of Scandinavia. Up until the time of Finland's independence in 1917–18, when the song began to be recognized as specifically applying to Finland, Pacius's tune and Runeberg's text were often also sung in Denmark, Norway, and Sweden. Note that in the original Swedish text there is no reference to Finland (except for in verses 4 and 10, which are rarely sung), only to a country in the north, but the Finnish text explicitly refers to Finland. The poem's theme is, furthermore, remarkably similar to that of the national anthems of Sweden (Du gamla, Du fria) and Norway (Ja, vi elsker dette landet).

Some Finns have proposed that the Finnish national anthem be changed to Finlandia by Jean Sibelius[citation needed], with lyrics by V.A. Koskenniemi (Finnish) and Joel Rundt (Swedish). There are also those who simply prefer Finlandia as a musical piece, although critics call it difficult to sing.[citation needed]

It is said that Pacius composed the tune in a mere fifteen minutes, with no idea that it would become so important to the people of Finland that they would eventually make it their national anthem.

Here are the lyrics of the first and last verse in Finnish, in Swedish (as originally written), and in an English-language version: 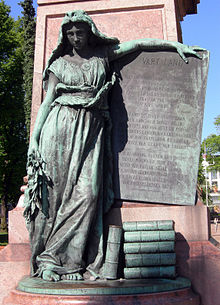 Monument to the Vårt Land poem in Helsinki.

(the original, by Johan Ludvig Runeberg)

(translation from the Finnish version)

Oh our land, Finland, fatherland,
echo loudly, golden word!
No valley, no hill,
no water, shore more dear
than this northern homeland,
this precious land of our fathers.

One day from your bud
you will bloom;
From our love shall rise
your hope, glorious joy,
and once in song, fatherland
higher still will ring.

(translation from the Swedish version)

Our land, our land, our Fatherland!
Ring out, dear word, oh sound!
No rising hill, or mountain grand,
No sloping dale, no northern strand,
There is, more loved, to be found,
Than this — our fathers’ ground.

Thy blossom, hidden now from sight,
Shall burst its bud ere long.
Lo! from our love, shall rise aright,
Thy sun, thy hope, thy joy, thy light,
And higher, once, more full and strong,
Shall ring Our Country’s song.

The original lyrics consisted of eleven verses but for the national anthem, the poem was shortened to the first verse and the last verse.