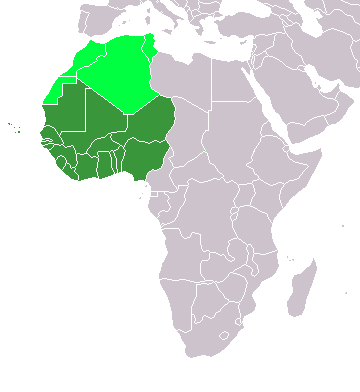 West Africa or Western Africa is the ernmost of the n . , the UN definition of Western Africa includes the following 16 countries distributed over an area of approximately 5 million square km: [ [http://www.un.org/unowa/unowa/bckgrdnew.pdf "The UN office for West Africa"] ]
*
*
*
* [Cape Verde is sometimes included due to its membership in ECOWAS.]
*
*
*
*
*
*
*
*
*
*
*
*

With the exception of , all of these countries are members of the or . The UN region also includes the island of , a in the South Atlantic Ocean.

West Africa is oriented west of an imagined north-south axis lying close to 10° east longitude. The Atlantic Ocean forms the western and southern borders of the region. The northern border is the , with the Niger Bend generally considered the northernmost part of the region. The eastern border is less precise, with some placing it at the Benue Trough, and others on a line running from Mount Cameroon to Lake Chad.

The inhabitants of West Africa are, in contrast to most of , non-Bantu speaking peoples.

West Africa, if one includes the western portion of the (, , , and ), occupies an area in excess of 6,140,000 km², or approximately one-fifth of Africa. The vast majority of this land is plains lying less than 300 meters above sea level, though isolated high points exist in numerous countries along the southern shore of the region.

The northern section of West Africa is composed of semi-arid terrain known as , a transitional zone between the Sahara desert and the hs of the western Sudan s form a third belt between the and the southern coast, ranging from 160 km to 240 km in width.

Despite the wide variety of cultures in West Africa, from through to , there are general similarities in dress, cuisine, music and culture that are not shared extensively with groups outside the geographic region. is the predominant historical religion of the West African interior and the far west coast of the continent; is the predominant religion in coastal regions of , , and ; and elements of indigenous religions are practiced throughout. Before the decline of the Mali and Songhai Empires there was a sizable group of Jewish communities in areas like Mali, Senegal, Mauritania, and Nigeria. Today there are small Jewish populations in Ghana, Nigeria and Mali. Along with historic migrations, these religions have culturally linked the peoples of West Africa more than those in other parts of Sub-Saharan Africa.

The game is quite popular in many parts of West Africa. Soccer is also a pastime enjoyed by many, either spectating or playing. The national teams of some West African nations, especially Nigeria, Ghana and the Ivory Coast, regularly qualify for the World Cup.

, , Fuji and are all modern musical genres which enjoin listeners in this region. Traditionally, musical and oral history as conveyed over generations by are typical of West African culture.

A typical formal attire worn in this region is the flowing Boubou (also known as "Agbada" and "Babariga"), which has its origins in the clothing of nobility of various West African empires in the 12th century.

The drum, whose origins lie with the Mandinka peoples, is now a popularly played drum among many West African ethnic groups. The is a 21-string harp-lute of Mandinkan origin, played by various groups in the region. The Djembe, Kora, the silk cloth of the peoples of Ghana and the distinct architectural style seen in the many mosques of the region (see ), are the primary symbolic icons of West African culture.

The history of West Africa can be divided into five major periods: first, its prehistory, in which the first human settlers arrived, developed agriculture, and made contact with peoples to the north; the second, the Iron Age empires that consolidated both intra-African, and extra-African trade, and developed centralized states; third, Major polities flourished, which would undergo an extensive history of contact with non-Africans; fourth, the colonial period, in which Great Britain and France controlled nearly the whole of the region; fifth, the post-independence era, in which the current nations were formed.

Early settlers, probably related to the Pygmies, arrived in West Africa around 12,000 B.C. Sedentary farming began around the fifth millennium B.C, as well as the domestication of cattle. By 400 B.C, ironworking technology allowed an expansion of agricultural productivity, and the first city-states formed. The domestication of the allowed the development of a cross-Saharan trade with cultures across the Sahara, including and the Berbers; major exports included , cotton cloth, metal ornaments and leather goods, which were then exchanged for , s, and textiles.

The development of the region's economy allowed more centralized states and civilizations to form, beginning with the civilization which began 500 B.C. and the in the 8th century AD which stretched to the . Based around the city of in modern-day Mauritania, the empire came to dominate much of the region until its defeat by invaders in 1052. The sought to fill the void, but was defeated (c. 1240) by the Mandinka forces of , founder of the new . The continued to flourish for several centuries (most particularly under Sundiata's grandnephew), Musa I before a succession of weak rulers led to its collapse under , and invaders. In the fifteenth century, the Songhai would form a new dominant state based around , in the , under the leadership of and . Further south, and have started to build the Meanwhile, south of the Sudan, strong city states arose in , Bono, and around the fourteenth century. Further east, arose as the dominant Yoruba state and the as a dominant Igbo state in modern-day Nigeria.

Following the 1591 destruction of the Songhai capital by Moroccan invaders, a number of smaller states arose across West Africa, including the of , the kingdom of , the Peul/ kingdom of , and the of . Portuguese traders began establishing settlements along the coast in 1445, followed by the French and English; the began not long after, which over the following centuries would debilitate the region's economy and population. The slave trade also encouraged the formation of states such as the , and , whose economies largely depended on exchanging slaves for an s, which were then used to capture more slaves.

The expanding produced significant populations of West Africans living in the , recently colonized by Europeans. The oldest known remains of African slaves in the Americas were found in in early 2006; they are thought to date from the late 16th century and the mid-17th century. [ [http://www.livescience.com/history/060131_first_slaves.html "Skeletons Discovered: First African Slaves in New World"] . January 31, 2006. LiveScience.com. Retrieved on .] European and American governments passed legislation prohibiting the Atlantic slave trade in the 19th century, though slavery in the Americas persisted in some capacity through the century; the last country to abolish the institution was in 1888. Descendants of West Africans make up large and important segments of the population in Brazil, the , , and the .

In the early nineteenth century, a series of Fulani reformist s swept across the Western Africa. The most notable include 's , which replaced the Hausa city-states, 's , which defeated the Bambara, and El Hadj 's , which briefly conquered much of modern-day Mali. However, the French and British continued to advance in the , subjugating kingdom after kingdom. With the fall of Samory Ture's new-founded in 1898 and the Ashanti queen in 1902, most West African military resistance to colonial rule came to an effective end.

Britain controlled The Gambia, Sierra Leone, Ghana, and Nigeria throughout the colonial era, while France unified Senegal, Guinea, Mali, Burkina Faso, Benin, Côte d'Ivoire and Niger into . founded the colony of , while claimed , but was forced to divide it between France and Britain following . Only retained its independence, at the price of major territorial concessions.

Following , nationalist movements arose across West Africa. In 1957, Ghana, under , became the first sub-Saharan colony to achieve its independence, followed the next year by France's colonies (Guinea in 1958 under the leadership of President Ahmed Sekou Touré); by 1974, West Africa's nations were entirely autonomous. Since independence, many West African nations have been plagued by corruption and instability, with notable civil wars in Nigeria, Sierra Leone, Liberia, and Côte d'Ivoire, and a succession of military coups in Ghana and Burkina Faso. Many states have failed to develop their economies despite enviable natural resources ("see: "), and political instability is often accompanied by undemocratic government. is also a growing problem for the region, particularly in Côte d'Ivoire, Liberia, and Nigeria. has been a problem in parts of northern Mali and Niger, the latter of which is currently undergoing a food crisis.

Until recently, most governments in West Africa were illiberal and corrupt and several countries have been plagued with political coups, ethnic violence and oppressive dictators. Since the end of colonialism, the region has been the stage for some of the most brutal conflicts ever to erupt. Among the latter are:

Though a few countries like and have enjoyed relative stability and have even seen some growth, all progress in the region is contingent on the efficacy and justness of governance and the fair allocation of resources which, for the moment, both leave much to be desired.

The (ECOWAS), founded by the 1975 , is an organization of West African states which aims to promote the region's economy. The (or UEMOA from its name in French, "Union économique et monétaire ouest-africaine") is limited to the eight, mostly Francophone countries that employ the as their common currency. The of Mali, Niger, and Burkina Faso seeks to jointly develop the contiguous areas of the three countries.