The Communist Party of Sri Lanka (Sinhala: ශ්‍රී ලංකාවේ කොමියුනිස්ට් පක්ෂය Tamil: இலங்கை கம்யூனிஸ்ட் கட்சி) is a communist political party in Sri Lanka. At the last legislative elections, on 2 April 2004, the party was part of the United People's Freedom Alliance that won 45.6% of the popular vote and 105 out of 225 seats. 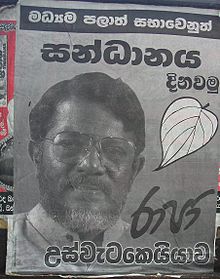 The CPSL was founded as the Communist Party of Ceylon in 1943, and was a continuation of the United Socialist Party. The USP had been formed out of the pro-Soviet Union wing of the Lanka Sama Samaja Party. The USP was proscribed by the colonial authorities.

The USP and then the CPC were initially led by Dr. S.A. Wickremesinghe.

In 1952 Wickremesinghe's wife, the English-born Doreen Young Wickremasinghe, a former leader of the Suriya-Mal Movement, was elected to the Sri Lankan parliament.

In 1963 the Communist Party, Lanka Sama Samaja Party and the Mahajana Eksath Peramuna formed the United Left Front. The ULF broke down in 1964 when the then Prime Minister Sirimavo Bandaranaike offered ministerial posts to LSSP and the CP.

In the mid 1960s the U.S. State Department estimated the party membership to be approximately 1900.[1]

In 1968, the CP joined the LSSP and the SLFP joined together in the United Front. In the 1970 government, Pieter Keuneman became Minister of Housing and Construction and B.Y. Tudawe, Deputy Minister of Education. However, one faction of the party, led by S. A. Wickremasinghe and Indika Gunawardena, maintained a line of critical support for the government.

After the general election of 1977, for the first time in half a century, the CPSL found itself without parliamentary representation, receiving about 2 % of the vote. However, after a subsequent election petition, Sarath Muttetuwegama was elected to the Kalawana seat in a by-election.

Later CPSL joined the People's Alliance, the front led by the Sri Lanka Freedom Party. When SLFP shelved the PA and formed the United People's Freedom Alliance together with Janatha Vimukthi Peramuna ahead of the 2004 elections, CPSL and LSSP initially stayed out. They did however, sign a memorandum with the UPFA at a later stage and contested the elections on the UPFA platform. CPSL does not, however, consider itself a member of UPFA.

The CPSL had one member of parliament in 2004, party general secretary D.E.W. Gunasekara. Gunasekara expected to become the speaker of the Sri Lankan parliament, but lost by a handful of votes. Gunasekara was then sworn in as the Minister for Constitutional Affairs.[2] [3]

The youth wing of CPSL is the Communist Youth Federation. CYF is a member organization of the World Federation of Democratic Youth.

For many years the CPSL published the Aththa (Truth) Sinhala newspaper, which became part of the popular cultural discourse. Its English organ was the Forward weekly.

The slogans based on the war in the country Communist Party, the Lanka Sama Samaja Party, and the Democratic Left Front held their combined Socialist People's Front's May Day Rally at Kirullepone, Colombo on May 1, 2008.[4]