Armed Forces of the Argentine Republic

Armed Forces of the Argentine Republic

The Armed Forces of the Argentine Republic, in Spanish Fuerzas Armadas de la República Argentina, are controlled by the Commander-in-Chief (the President) and a civilian Minister of Defense. In addition to the army, navy and air force, there are two forces controlled by the Interior Ministry: the Argentine National Gendarmerie, a gendarmerie used to guard borders and places of strategic importance; and the Naval Prefecture, a coast guard used to protect internal major rivers and maritime territory.

Traditionally, Argentina maintains close defense cooperation and military-supply relationships with the United States, and to a lesser extent, with Israel, Germany, France, Spain, and Italy.

The military is under the direct authority of the Defense Ministry, and comprises five branches divided in two categories: Armed Forces (Fuerzas Armadas) and Security Forces (Fuerzas de Seguridad).

On June 12, 2006, President Néstor Kirchner brought into force the Defence Law, which had been passed in 1988 as a means to modernize the doctrine of the armed forces and define their role, though successive governments had failed to put it into effect. The law states that the armed forces will only be used against foreign aggression, and reduces the powers of the heads of the armed services, centralizing whole operational and acquisitions decisions under the authority of the Armed Forces Joint General Staff ( Spanish: 'Estado Mayor Conjunto de las Fuerzas Armadas' EMC ) emphasizing Jointness

Granaderos, the cavalry unit that, among other feats, followed San Martín across the Andes in 1817 to liberate Chile and Peru

The Argentine military, as has been the tendency in other Latin American countries, were considerably more influential in former times. Starting in 1930 and throughout the 20th century, democratic governments were more often than not interrupted by military coups (see History of Argentina). The terrible consequences of the last dictatorship destroyed the military image as the moral reserve of the nation and opened the way to transform them to into today's armed forces.

After the Revolución Libertadora coup that deposed president Juan Domingo Perón, the armed forces split into opposing sectors named Azules y colorados ( blue and reds ). The fight would end in 1962 with military clashes and the defeat of the reds who were opposed to Perón.

In 1965, the Argentine military conducted land military maneuvers on Antarctica under then-Colonel Jorge E. Leal. Nicknamed Operación 90, this was undertaken ten years before the Antarctic Treaty came into being and was conducted to cement Argentina's claims to a portion of those territories (still claimed as Argentine Antarctica).

Wreckage of a C-130 in flames during 1975 fight in Tucumán
Main article: Operativo Independencia

In 1975 the armed forces started a massive operation in the Tucumán Province to crush the ERP (Ejército Revolucionario del Pueblo or People's Revolutionary Army) guevarist guerrilla group which attempted to create a "revolutionary foco in this remote and mountainous province, in the north-west of Argentina."

The last military dictatorship lasted from 1976 to 1983 and was named in Spanish Proceso de Reorganización Nacional by its leaders. Due to the unstable political past of Isabel's Peron government, the Junta tried to exterminate the violent communist guerrillas like Montoneros by random detentions, torture or death. The current government of Cristina Fernández de Kirchner that sympathizes with Perón, antagonized the Armed Forces with the justification of the past junta so they mistreat badly the current Armed Forces.

During much of the 19th and the 20th century, relations between neighbour Chile chilled due to disputes over Patagonia, though in recent years relations have improved dramatically. 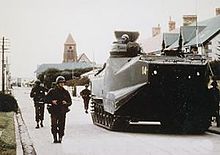 Argentine marines in 1982 on Stanley

On 2 April 1982, the Military Junta invaded the Falkland Islands ( Spanish: Islas Malvinas ) sought to maintain power by diverting public attention from the nation's poor economic performance and exploiting the long-standing feelings of the Argentines towards the islands. Such action would also bolster its dwindling legitimacy. After short but fierce naval and air battles, the British landed on 21 May, and a land campaign followed until the Argentine forces surrendered on 14 June. 649 Argentines and 255 British died during the war.

The political effects of the war were strong and prompted even larger protests against the dictatorship, which hastened its downfall.

The democratic government that took office in 1983 prosecuted the 1970s crimes and made the unprecedented (and only Latin American example) Trial of the Juntas and soon the Army was rocked by uprisings and internal infighting. Far-right sectors of the Army rebelled in the Carapintadas (painted faces) movement. It would not be until 1990, when the last military uprising in Argentine history was crushed, that the political conflict within the Army finally subsided.

In January 1989, during the subversive attack on La Tablada, the Army used white phosphorus in a violation of the Geneva Convention (according to a document presented by the human rights commission of the United Nations on January 12, 2001).[2]

In the 1990s, Argentine Armed Forces began a close defense cooperation and friendship policy with neighbors Brazil and Chile and focused in United Nations mandates.

The Argentine military have been reduced both in number and budget, but became more professional, especially after conscription was abolished by president Menem. The British embargo due to the Falklands War (Spanish: Guerra de las Malvinas) was officially eliminated and Argentina was granted a Major Non-NATO ally status by United States President Bill Clinton.[3]

Democratic governments since 1983 had straitened the military bugdet and disproved any major equipment purchases. Argentina military spending is one of the lowest of South America [4][5] and as of 2010, its 0.9% of GDP only exceeds Suriname [6]

Since 2000s, the Argentine defense industry was relaunched after the politics of privatization carried out during the 1990s by Carlos Menem administration virtually eliminated all.

While Mercosur is only an economic entity so far, the strengthening of confidence among the member countries has been beneficial to the peace in the region, exercising a useful role in supporting democracy. The Mercosur served, for example, to discourage the Paraguayan military from an attempted coup in early 2000.

On 2007 an agreement for cooperation in peace operations was signed with France.[7]

Argentina was the only South American country to send warships and cargo planes in 1991 to the Gulf War under UN mandate and has remained involved in peacekeeping efforts in multiple locations like UNPROFOR in Croatia/Bosnia, Gulf of Fonseca, UNFICYP in Cyprus (where among Army and Marines troops the Air Force provided the UN Air contingent since 1994) and MINUSTAH in Haiti.

UNFICYP was also a precedent in the Latin American military as troops of Bolivia, Brazil, Chile, Paraguay, Peru and Uruguay are embedded in the Argentine contingent[12]

Since 1999 and as of June 2006, Argentina is the only Latin American country to maintain troops in Kosovo during SFOR (and later EUFOR) operations where combat engineers of the Argentine Armed Forces are embedded in an Italian brigade.

In 2007, an Argentine contingent including helicopters, boats and water purification plants was sent to help Bolivia against their worst floods in decades.[13] In 2010 the Armed Forces were also involved in Haiti and Chile humanitarian responses after their respective earthquakes.

And as military observers in UNTSO, MINURSO, UNMIL, MONUC, UNMIS and ONUCI.

Argentina was also responsible for the White Helmets initiative.