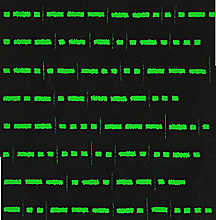 The concept is based around a 23-year-old disabled man from named Billy.

Billy is confined to a and is thought to be mentally a vegetable. However, Billy is highly intelligent but has no way of expressing himself. Billy has a twin brother Benny who is a coal miner. Billy lives with Benny, Molly his wife, and their children. Unfortunately, Benny has lost his job in the mines due to the "market forces". One night, Benny and Billy are out on a pub crawl when they pass a shop full of TV screens broadcasting 's "mocking condescension". Benny vents his anger on this shop and steals a cordless phone. Next, in theatrical fashion, Benny poses on a footbridge in protest to the closures; the same night, a taxi driver is killed by a concrete block dropped from a similar bridge. The police question Benny, who hides the phone in Billy's wheelchair. Benny is taken to prison, and Molly, unable to cope, sends Billy to live with his uncle David in L.A.. Billy is gifted and can hear radio waves in his head ("Radio Waves" track 1), so he begins to explore the cordless phone, recognising its similarity to a radio. He experiments with the phone and is able to access computers and speech synthesisers, he learns to speak through them. He calls a radio station in named Radio KAOS (hence the album title) and tells them of his life story about his brother being in jail ("Me or Him" track 3), about his sister-in-law not being able to cope and sending him to L.A. to live with his uncle Dave ("Sunset Strip" track 5), and about the closures of the mines ("Powers that Be" track 4). Billy eventually hacks in to a and fools the world in to thinking nuclear s are about to be detonated at major cities all over the world whilst deactivating the military's power to retaliate ("Home" track 6 and "Four Minutes" track 7). The album concludes with a song about how everyone, in thinking they were about to die, realises that the fear and competitiveness peddled by the is much less important than their love for family and the larger community. ("The Tide is Turning" track 8).

The album is dedicated "to all those who find themselves at the violent end of ." This and other moments in the album--such as a segment juxtaposing a campaign slogan with clips from an old western TV show and an apparent recorded plea from American hostages not to engage in "heroics" to free them--make Waters' political point of view quite clear.

There are three other songs that were written for this album, but were only played live or released on singles. "Going to Live in L.A." told of how Benny was sent to jail, his sister-in-law Molly could not cope and so sent Billy to live with his uncle Dave. "Get Back to Radio" was told from Benny's perspective behind bars about how lonely he is. "Molly's Song" (part of which is reprised on "Four Minutes" on the album) is Billy's tale of how he can hack in to government satellites to watch over Molly, his sister-in-law back in Wales.

The KAOS tour lasted from mid August 1987 to the end of November of the same year. It was entirely in North America save for the final two shows from , England. The tour was the largest of Waters career and featured extravagant staging, props and video. The entirety of the concert was treated as a KAOS radio special; KAOS on the Road and featured in between many songs; introducing them, conversing with Billy or simply complimenting Roger and the band on their performance. The screen used for the tour featured various video footage of Roger, Jim and various other actors playing out aspects of the songs. It also featured animations and real footage of what the songs represented. The concert was 'interrupted' by Billy at one point each night and he played the video to the debut Pink Floyd single . Prior to each show commencing, Jim Ladd took calls from people in a special booth and these calls were then answered by Roger. The person in each booth was usually chosen via a competition on local radio stations, keeping in the theme of the concert. The setlist occasionally included the entire Radio KAOS album, as well as popular Waters composed Floyd songs and typically lasted more than two and a half hours

*KAOS is the callsign of a real radio station, a non-commercial station that broadcasts from the campus of The Evergreen State College in Olympia, .
*Jim, the DJ that speaks to Billy at Radio KAOS, is voiced by radio personality .
*The on the cover decodes to "Roger Waters Radio KAOS Who Needs Information Th". On recent re-releases, the Morse code on the inside cover and underneath the CD tray reads "E Powers That Be Home The Tide Is Turning Radio Waves".
*The album contains a Morse code message at the beginning and end of the album. This is the "hidden verse" of "Tide is Turning":

:This verse, expressing Waters' dislike of the way movies glorify violent actions, is alluded to in the final spoken line of the song, "The tide is turning, Sylvester."
*Waters performed "The Tide Is Turning" as the full-cast closing number at his 1990 concert at the site of the .
*The opening song, "Radiowaves", contains the familiar Waters scream heard in many Pink Floyd songs, notably on "The Wall" as "The Happiest Days of Our Lives' segues into " Part II", and on "", "","",and "", among others.
*The closing song "The Tide Is Turning" was only added as a supposed "happy ending" by Waters when EMI told him that the album was too bleak to sell.
*Waters was on the list of artists considered for , but ended up being cut ( bandmate played, but only as the guitarist for ). Watching the event on television, Waters was so inspired that he wrote "The Tide Is Turning", without knowing what album it would end up on.
*In the manga series , one of the characters, Kaos, runs a pirate radio station named after Radio K.A.O.S.
*The working title for the album was "Home", and Waters has said in interviews that he considers the song "Home" to express the central theme of the album.
*The producer of the album, Ian Ritchie, is currently ( 2006 and 2007 ) part of Roger's touring band playing saxophone.
*Some CD presses are labelled with an incorrect Patent date of 1967 which should read 1987. Coincidentally 1967 is the year that Pink Floyd released their first album: .
*Waters has expressed unhappiness with the finished album, in particular the production. Fact|date=August 2008