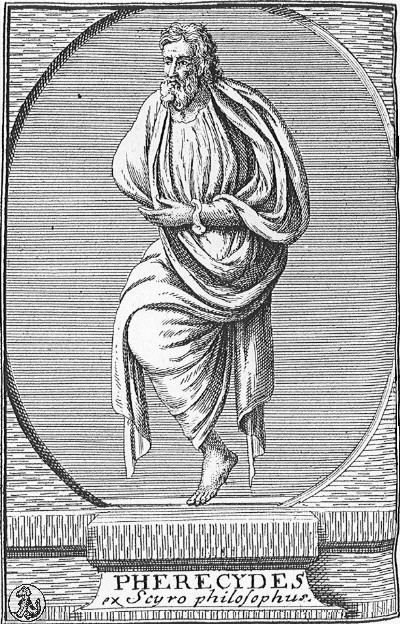 Pherecydes of Syros (in Greek: Φερεκύδης) was a Greek thinker from the island of , of the . Pherecydes authored the "Pentemychos", one of the first attested prose works in Greek literature, which formed an important bridge between mythic and thought.

Very little is known of his life. The sources are often contradictory [ [http://www.ancientlibrary.com/smith-bio/2591.html Smith, Dictionary of Greek and Roman Biography and Mythology] ] . It has been said that he was a son of Babys, and that he was most likely active in ca. 540 BC.

In this work, Pherecydes taught his philosophy through the medium of mythic representations. Although it is lost, the fragments that survive are enough to reconstruct a basic outline. in "Metaphysics" (section 1091 b 8) thus characterized Pherecydes' work as a mixture of myth and .

The book "Pentemychos" is an elaborate version of cosmogenesis, describing how three eternal "things" or "beings" beget (or become, depending on how you read) a number of principles or forms before the ordered world, the cosmos, appears. The three eternal principles are Zas ("he who lives"), Chronos ("time"), and Chthonie ("underlying the earth").

Alongside Chthonie and Chronos, Pherecydes held a power called Zas. Zas is thought to be a strange etymological form of Zeus, and to be identical with he Orphic Eros in function, and as such a personification of masculine, or simply sexual, creativity. Proclus said that "Pherecydes used to say that Zeus changed into Eros when about to create, for the reason that, having created the world from opposites, he led it into agreement and peace and sowed sameness in all things, and unity that interpenetrates the universe". [Kirk, G. S., Raven, J. E., & Schofield, M., The Presocratic Philosophers, p. 62, Cambridge Univ. Press 1999]

The act of creation itself (perhaps it is more accurate to say that Chronos creates -- it is from his seed that the actual "stuff" comes from -- and that Zas orders and distributes) is described mytho-poetically as Zas making a cloth on which he decorates earth and sea, and which he then presents as a wedding gift to Chthonie, and wraps around her. Yet, in another fragment it is not Chthonie, but "a winged oak" that he wraps the cloth around. [Kirk, G. S., Raven, J. E., & Schofield, M., The Presocratic Philosophers, p. 63, Cambridge Univ. Press 1999] The stories are not mutually exclusive, simply different. The chronology is hard to figure out because much is lacking in the fragments, but one thing is clear, and that is that creation is hindered by chaotic forces.

Before the world is ordered a cosmic battle takes place, with Kronos (ordered time) as the head of one side and Ophioneus as the leader of the other. [Kirk, G. S., Raven, J. E., & Schofield, M., The Presocratic Philosophers, p. 66, Cambridge Univ. Press 1999] The same story is elsewhere enacted with Zeus and Typhon/Typhoeus as leading characters, and it also has close parallels in many myths from cultures other than the Greek (Marduk vs. Tiamat, etc). Ophioneus and its brood are often depicted as ruling the birthing cosmos for some time, before falling from power. The chaotic forces are eternal and cannot be destroyed; instead they are thrown out from the ordered world and locked away in Tartaros in a kind of "appointment of the spheres", in which the victor (Zeus-Kronos) takes possession of the sky and of space and time. [Kirk, G. S., Raven, J. E., & Schofield, M., The Presocratic Philosophers, pp. 66-67, Cambridge Univ. Press 1999] The locks to Tartaros are fashioned in iron by Zeus, and might hence have been associated with his element of aither, and in bronze by Poseidon, which might indicate a link to water (which was often conceived of as the "first matter"). Judging from some ancient fragments Ophioneus is thrown into Okeanos, not into Tartaros.

Exactly what entities or forces that were locked away in Pherecydes’ story cannot be known for sure, unless his book was miraculously recovered. Good guesswork would be to have five principal figures. We know that Ophioneus, or Typhon, was one and the same. We also know that Eurynome fought on the side of Ophioneus against Kronos. [Kirk, G. S., Raven, J. E., & Schofield, M., The Presocratic Philosophers, p. 66, Cambridge Univ. Press 1999] That Chthonie is a principal "thing" of the underworld is almost superfluous to argue, but whether she is to be counted as one of the five or the five "sum-total" is more of an open question. Apart from these we know that Ophioneus-Typhon mated with Echidna, and that Echidna herself was somehow mysteriously "produced" by Callirhoe. If Pherecydes counted five principal entities in association the pentemychos doctrine, then Ophioneus, Eurynome, Echidna, Calirrhoe and Chthonie are the main contenders. As said, Kronos is replaced by Zeus in the more popularly known version, but the overall story remains the same. Kronos/Zeus orders the offspring out from the cosmos to Tartaros. There they are kept behind locked gates, fashioned in iron (associated with Zeus and his element of sky/space) and bronze (by Poseidon -- the water force). We are told about chaotic beings put into the pentemychos, and we are told that the Darkness has an offspring that is cast into the recesses of Tartaros. A fragment exclusively making the equation for us is lacking, but it does indeed seem very, very plausible that the prison-house in Tartaros and the pentemychos are ways of referring to the essentially same thing. According to Celcus, Pherecydes said that: "Below that portion is the portion of Tartaros; the daughters of Boreas [the north wind] , the Harpies and Thuella [Storm] , guard it; there Zeus banished any of the gods whenever one behaves with insolence." [Schibli, S., Hermann, Pherekydes of Syros, p. 22, Oxford Univ. Press 2001] Considering this statement, Pherecydes' own words, the identity between Zeus' prison-house and the pentemychos seems exceedingly likely.

Pherecydes' "Pentemychos" is thought to have contained a mystical esoteric teaching, treated allegorically. One ancient commentator said that:

"Also, Pherecydes, the man of Syros, talks of recesses and pits and caves and doors and gates, and through these speaks in riddles of becomings and deceases of souls." [Kirk, G. S., Raven, J. E., & Schofield, M., The Presocratic Philosophers, p. 59, Cambridge Univ. Press 1999]

Aside from his writing, Pherecydes is known for having made a sundial on the island of Syros [ [http://www.ucpress.edu/books/pages/10217/10217.ch01.pdf Munn, Mark, 'The Mother of the Gods, Athens, and the Tyranny of Asia'] ] . The [http://www.tmth.edu.gr/en/index.html Science Center & Technology Museum of Thessaloniki] website informs us:

- A 'heliotropion', or 'shadow-chaser': The first example of this instrument, which was a more advanced kind of gnomon used to determine midday and to calculate the length of the year and the geographical latitude, was built by Pherecydes in Samos.

Pherecydes' contribution to the early Presocratic thought is (1) the denial of creation; (2) cosmos self-creation; (3) the eternal nature of the first principles. Both and Augustine thought that Pherecydes of Syros first taught the immortality of the soul. writes that some considered Pherecydes to have been the teacher of . He is occasionally counted among the .