Maankombu Sambasivan Swaminathan (Hindi: एम्. एस. स्वामीनाथन; born 7 August 1925) is an Indian agriculture scientist in Kuttanad, kerala. He was the second of four sons of a doctor. He is known as the "Father of the Green Revolution in India", for his leadership and success in introducing and further developing high-yielding varieties of wheat in India. He is the founder and Chairman of the MS Swaminathan Research Foundation.[1] His stated vision is to rid the world of hunger and poverty.[2] Dr. Swaminathan is an advocate of moving India to sustainable development, especially using environmentally sustainable agriculture, sustainable food security and the preservation of biodiversity, which he calls an "evergreen revolution"[3] In 1999, Time magazine placed him in the Time 20 list of most influential Asian people of the 20th century.[4]

Swaminathan’s family was among the most important in the village of Moncombu. Generations before, the rajah of Ambalapuzha had traveled to the neighboring region of Tamil Nadu. He had been very impressed by the scholars at the Thanjavur court and requested that one such scholar be sent to his province. Enji Venkatachella Iyer, Swaminathan’s ancestor, was chosen to move to Ambalapuzha. The rajah was so delighted and struck by Venkatachella Iyer’s knowledge of the scriptures that he gifted him acres of land comprising the village of Monkombu. The family came to be called the Kottaram family (‘kottaram’ means palace).

M. S. Swaminathan was born on August 7, 1925. His father died when Swaminathan was 11. His early schooling was at the Native High School and later at the Little Flower Catholic High School in Kumbakonam. He went to college at Maharajas College in Ernakulam and earned a Bachelor of Science degree (B.Sc.) in zoology. Swaminathan was strongly influenced by Mahatma Gandhi’s belief in ahimsa or non-violence to achieve Purna swaraj (total freedom) and swadeshi, (self-reliance) on both a personal and national level.[5] During this time of wartime food shortages he chose a career in agriculture and enrolled in Coimbatore Agricultural College where he graduated as valedictorian with another B.Sc, this time in Agricultural Science. In 1947, the year of Indian independence he moved to the Indian Agricultural Research Institute (IARI) in New Delhi as a post-graduate student in genetics and plant breeding and obtained a post-graduate degree with high distinction in Cytogenetics in 1949. He received a UNESCO Fellowship to continue his IARI research on potato genetics at the Wageningen Agricultural University, Institute of Genetics in the Netherlands. Here he succeeded in standardizing procedures for transferring genes from a wide range of wild species of Solanum to the cultivated potato, Solanum tuberosum. In 1950, he moved to study at the Plant Breeding Institute of the University of Cambridge School of Agriculture. He earned a Doctor of Philosophy (Ph.D) degree in 1952, for his thesis, "Species Differentiation, and the Nature of Polyploidy in certain species of the genus Solanum – section Tuberarium". His work presented a new concept of the species relationships within the tuber-bearing Solanum.

Swaminathan then accepted a post-doctoral research associateship at the University of Wisconsin, Department of Genetics to help set up a USDA Potato Research Station. Despite his strong personal and professional satisfaction with the research work in Wisconsin, he declined the offer of a full time faculty position, returning to India in early 1954.[5]

M. S. Swaminathan is married to Mina Swaminathan who he met in 1951 while they were both studying at Cambridge. They have three daughters: Soumya Swaminathan, Madhura Swaminathan and Nitya Rao. Dr. Swaminathan lives in Chennai, Tamil Nadu with his wife, and has five grandchildren - Anandi, Shreya, Kalyani, Akshay and Madhav. M.S. Swaminathan has been influenced by the Indian philosopher and mystic Sri Aurobindo. Speaking at Auroville in 1997, he said , "My first visit to Sri Aurobindo Ashram was on 15th August 1947. It was the day of India’s Independence. When everybody was going towards the Marina Beach in Madras, I was walking towards Egmore Station to take a train to Pondicherry.”

Dr. Swaminathan has worked worldwide in collaboration with colleagues and students on a wide range of problems in basic and applied plant breeding, agricultural research and development and the conservation of natural resources.

His professional career began in 1949:

On the occasion of Nobel Peace Prize award in 1970, the laureate Dr. Norman Borlaug, said of Dr. Swaminathan: "The green revolution has been a team effort and much of the credit for its spectacular development must go to Indian officials, Organizations, Scientists and farmers. However, to you, Dr. Swaminathan, a great deal of the credit must go for first recognizing the potential value of the Mexican dwarfs. Had this not occurred, it is quite possible that there would not have been a green revolution in Asia".[26]

On the occasion of the presentation of the First World Food Prize[24] to Dr. Swaminathan in October 1987, Mr. Javier Perez de Cuellar - Secretary General of the United Nations, wrote: "Dr. Swaminathan is a living legend. His contributions to Agricultural Science have made an indelible mark on food production in India and elsewhere in the developing world. By any standards, he will go into the annals of history as a world scientist of rare distinction".

Swaminathan has been described by the United Nations Environment Programme as "the Father of Economic Ecology".

He was one of three from India included in TIME Magazine's 1999 list of the "20 most influential Asian people of the 20th century", the other two being Mahatma Gandhi and Rabindranath Tagore.[25]

Following the 2004 Indian Ocean earthquake, he advised India to plant new mangrove groves along the shoreline to minimize damage from future tsunamis.[citation needed]

Dr. Swaminathan was the featured speaker at The 2006 Norman E. Borlaug International Symposium: in Des Moines, Iowa on, October 19, 2006. He was sponsored by Humanities Iowa, an affiliate of the National Endowment for the Humanities. Dr. Swaminathan presented The "Third Annual Governor's Lecture" and spoke on "THE GREEN REVOLUTION REDUX: Can we replicate the single greatest period of food production in all human history?" Read full text:,[26] See: Powerpoint Presentation,[27] Hear:[28] about the cultural and social foundations of the Green Revolution in India and the role of historic leaders in India, such as Mahatma Gandhi, in inspiring the Green Revolution there by calling for the alleviation of widespread hunger. He also talked about the links between Gandhi and the great Iowa scientist George Washington Carver.,[29]

A scientific paper in which Swaminathan and his team claimed to have produced a mutant breed of wheat by gamma irradiation of a Mexican variety (Sonora 64) resulting in Sharbati Sonora, claimed to have a very high lysine content led to a major controversy. The case was discussed as a classic example of scientific misdemeanor and was claimed to be an error made by the laboratory assistant.[30] The episode was also compounded by the suicide of an agricultural scientist.[31][32][33][34][35] Recent workers have also studied it as part of a systemic problem in Indian agriculture research.[36]

In addition he has written a few books around the general theme of his life's work, biodiversity and sustainable agriculture for alleviation of hunger.

He has published laboratory research results in several scientific journals and increasingly writes for a wider audience in environmental journals. Some of his publications are available online in abstract or full text.[46] and.[47]

Dr. Swaminathan has received several outstanding awards and prizes. These prizes include large sums of money, which has helped sustain and expand his work.

biological productivity on an ecologically sustainable basis, and to promoting the conservation of biological diversity”1991 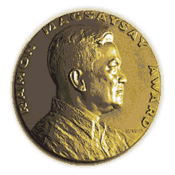 He holds more than 50 honorary Doctorate degrees from universities around the world.

National Awards
He has been honored with several awards in India for his work to benefit the country.

International Awards
He has been honored with recognition from several international organizations for spreading the benefits of his work to other countries. 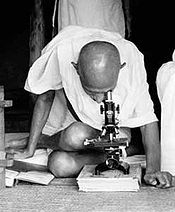 Despite these awards and honors, the credibility of Swaminathan and his promotion of biotechnology remains open to question by some. His record retains some controversy. There are cases of scientific fraud and scandals involving the suicide of a fellow scientist at the (ICAR).[64] The first among those who came to expose many of the claims made by MS Swaminathan was Claude Alvares. In his article The Great Gene Robbery 23 March 1986 The Illustrated Weekly.[27] Alvares provided enough evidences to show that most of the research that were initiated by him and International Rice Research Institute were not original.[65] In the recent years Shiv Vishwanathan in an EPW [28] article writes he is a sociological phenomenon. He is paradigm, exemplar, dissenter, critic and alternative. .....Swaminathan always assimilates the new. Earlier Claude Alvares had given a better picture as follows

Strangely, he has become more and more akin to HYV of the seeds he sells. Like them, he is capable of high-yielding varieties of phrase and word. At a Gandhi seminar, he will speak of the relevance of Gandhi. At a meeting in Madras on the necessity of combine harvesters. At another meeting on appropriate technology, he will plump for organic manures. At a talk in London, he will speak on the necessity of chemical fertilizers. He will label slum dwellers ‘ecological refugees’, and advertise his career as a quest for ‘imparting an ecological basis to productivity improvement.’ This, after presiding over, and indiscriminately furthering, one of the ecologically most devastating technologies of modern times – the HYV package of the Green revolution.[29]