Highway 60 (Hebrew: כביש 60‎, "Kvish Shishim") is a north-south intercity road in Israel and the West Bank that stretches from Beersheba to Nazareth.[citation needed] 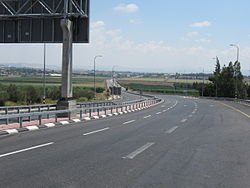 The route is also known as the "Route of the Patriarchs" (Hebrew: דרך האבות‎) since it follows the path of the ancient highway that runs along the length of the central watershed, and which prominently figures into the travels of the Biblical patriarchs.

From its junction with Route 40 in Beersheba to the city's outskirts, Route 60 is a dual carriageway with at-grade intersections. While it continues on to serve as the main north-south artery between Israeli settlements and Palestinian communities such as the cities of Hebron and Bethlehem in the southern West Bank, it is a two-lane, shoulderless road until past Hebron at Gush Etzion Junction, where it regains its lane-separation until short of Bethlehem, that section having recently been widened. Upon entering Jerusalem, its lanes are again mostly separated as it serves as a central artery in the city center. In the northern quarters it becomes a separate grade freeway with multiple interchanges, from where it continues through the central and northern West Bank as a two-lane road, not being divided again until the stretch between Afula and its terminus in downtown Nazareth.[1]

Due to it running through a mainly rural setting, many of the junctions along its route feature hitchhiking posts called trempiadas.

Within Jerusalem, Highway 60, known by the municipality as the Talpiot–Atarot route and often referred to by its official Jerusalem Municipality designation, "Road 1" (not to be confused with National Highway 1), is the central north-south artery running through the city centre. The Jerusalem portion of the road begins at the separation wall at the Bethlehem checkpoint, then runs north past Beit Safafa and Gilo, and on through Talpiot. This section, known as "Hebron Road" (Hebrew: דרך חברון‎), is divided with multiple lanes and has undergone recent construction to include dedicated bus lanes and infrastructure for its eventual conversion into a line of the Jerusalem Light Rail.

At its junction with 'David Remez Street'. in the Abu Tor neighborhood, Route 60 narrows and descends into the Hinnom Valley, curving around Sultan's Pool directly under Mount Zion. It then ascends as 'Hativat Yerushalayim Street' to intersect with the Jaffa Gate entrance to the Old City of Jerusalem. 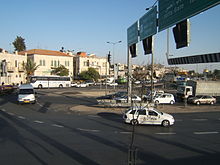 Road 60 crossing Street of the Prophets; the Dome of the Rock can be seen in the far right background.

From there it runs underneath the Jaffa Gate Square, briefly overlaps Jaffa Road and then it enters a tunnel passing underneath Jerusalem's New Gate. It emerges just west of the Damascus Gate intersecting with Street of the Prophets, again becoming a divided street. This section of the road includes tracks for the now completed Jerusalem Light Rail's 'red line'.

Briefly called Heil HaHandassa Boulevard and then 'Haim Bar-Lev Boulevard', it continues northward passing Meah Shearim, the American Colony, and French Hill, until Meinertzhagen junction, where it becomes a separate grade freeway. As a freeway, it interchanges with Highway 1 at Sha'ar Mizrah. The freeway then bypasses Shuafat with one of the longest and highest bridges in the country, feeding into Beit Hanina and Pisgat Ze'ev with two more interchanges. It continues as an at-grade road intersecting with 'Neve Yaakov Blvd' and finally exits the city near Kalandia.

Before the Oslo Accords, Palestinians lived under Israeli authority and could travel freely on the road. After the Palestinian Authority assumed control over various cities, Israel established checkpoints on areas of the route which entered Palestinian jurisdiction. New routes of highway were paved so that Israeli traffic could bypass the Palestinian towns in order to reduce friction. These so-called 'bypass roads,' while a contentious issue in their own right due to the varying levels of limitation on Palestinian access, also served as an improvement to the road which allowed traffic to flow around, rather than through the heart of congested urban areas.

Tunnel and bridge to Gush Etzion below Gilo

One of the more sophisticated segments is the stretch known as the "Tunnels Highway." Designed by a French firm[specify], the route, which leads from southern Jerusalem to the Gush Etzion area, bypasses Bethlehem to the northwest using a pair of tunnels. The northern tunnel, called the Gilo tunnel because it is adjacent to the settlement of Gilo, is 270 metres long. The second tunnel, called the Refaim tunnel based on the nearby Refaim Valley and passing under Har Gilo and Beit Jala, is 900 m long, making it the longest road tunnel in the West Bank. The tunnels are linked by the West Bank's highest and longest bridge, crossing the Walaja Valley.[citation needed]

Route 60 was a central scene of violence during the al-Aqsa Intifada, which was in part defined by the thousands of shooting attacks on its Israeli traffic, including hundreds of casualties.[citation needed] The Israeli Army, in response, has fortified various sections with anti-sniper walls and had established checkpoints along the route.[citation needed] The Tunnels Highway came under particularly heavy assault during the shooting on Gilo neighborhood since it lies between Gilo and Beit Jala. The concrete barriers employed on other dangerous stretches of road were too heavy to be supported by the bridge, and so a barrier of bulletproof composite armour similar to that employed on Merkava tanks was constructed.[citation needed]

The road was also the site of terrorist attacks in June[citation needed] and August 2010.[2][3]