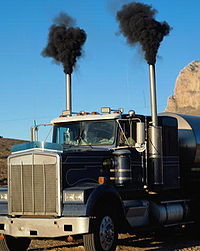 A diesel-powered truck emits a large amount of exhaust gas while starting its engine.

Exhaust gas or flue gas is emitted as a result of the combustion of fuels such as natural gas, gasoline/petrol, diesel fuel, fuel oil or coal. According to the type of engine, it is discharged into the atmosphere through an exhaust pipe, flue gas stack or propelling nozzle.

It often disperses downwind in a pattern called an exhaust plume.

The largest part of most combustion gas is nitrogen (N2), water vapor (H2O) (except with pure-carbon fuels), and carbon dioxide (CO2) (except for fuels without carbon); these are not toxic or noxious (although carbon dioxide is generally recognized as a greenhouse gas that contributes to global warming). A relatively small part of combustion gas is undesirable noxious or toxic substances, such as carbon monoxide (CO) from incomplete combustion, hydrocarbons (properly indicated as CxHy, but typically shown simply as "HC" on emissions-test slips) from unburnt fuel, nitrogen oxides (NOx) from excessive combustion temperatures, Ozone (O3), and particulate matter (mostly soot).

In spark-ignition engines exhaust gas from an internal combustion engine whose fuel includes nitromethane, contains nitric acid vapour, which when inhaled causes a muscular reaction making it impossible to breathe, and people exposed to it should wear a gas mask.[1] 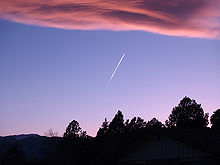 What looks like exhaust from jet engines, is actually contrail. (Jet flying over the United States Air Force Academy in Colorado Springs, Colorado).

In jet engines and rocket engines, exhaust from propelling nozzles which in some applications shows shock diamonds.[citation needed]

In steam engine terminology the exhaust is steam that is now so low in pressure that it can no longer do useful work.

One of the advantages claimed for advanced steam technology engines is that that they produce smaller quantities of toxic pollutants (e.g. oxides of nitrogen) than petrol and diesel engines of the same power.[citation needed] They produce larger quantities of carbon dioxide but less carbon monoxide due to more efficient combustion. 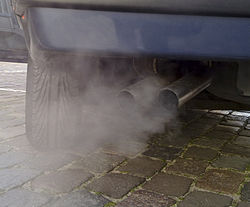